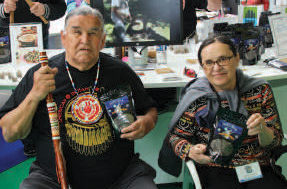 By Norma Renville and Jack Swanson

After two years of planning and development work conducted by American Indian Movement Interpretive Center (AIMIC) board members, staff and consultants, the AIMIC sent a delegation to the Foire de Tours in Tours, France to introduce its citizens to real wild rice and to share their culture.

The Foire, which is similar to the Minnesota State Fair, is an international fair held each year with themes that in the past have included Portugal, Italy and Japan. Minneapolis, Minnesota was the theme of the Foire this year as it marks the 25th anniversary of Tours and Minneapolis being Sister Cities.

AIMIC wanted to take advantage of the Foire’s “Minneapolis Minnesota” theme and the fact that Tours is one of four cities in France that are designated a Cité de la Gastronomie (a city of gastronomy) to launch their wild rice venture. The people of Tours seem to appreciate and understand specialty food items, like wild rice, and how food can be used to develop friendships and bridge cultures.

The hard work began once AIMIC staff, board members, and volunteers arrived in Tours to provide the visitors with an authentic American Indian Cultural Experience; in coordination with the Meet Minneapolis Staff, the Mayor of Tours and the staff at the Foire, including Denis Schwok, the Chairman of the Board for the Foire de Tours.

The AIMIC planning committee members believe the drum is the heart of the people and that it would help bring to life Native culture and spirituality through songs. As such, Midnite Express was selected to perform, along-side the Native Pride Dancers, to showcase authentic songs and dances to the French people. Rodney Stanger, one of the Midnite Express singers, speaks French and was able to explain to the crowds the songs that were sung and the dances that were performed.

The Meet Minneapolis Expo Center event was packed at the three daily performances and the visitors seemed mesmerized by the singing and dancing. The Native Pride Dancers consisted of two female jingle dress dancers, a female traditional dancer, and two traditional men dancers and a male hoop dancer. 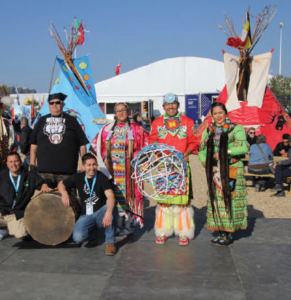 Artist Wolf Bellecourt painted two tipis that were erected at the Foire De Tours. Visitors of the Foire went in and out of the tipis, taking pictures. AIMIC staff say they felt they were breaking down stereotypes of American Indian people and building a cultural understanding as the people of France learned about the beauty of American Indian culture and history.

Over 3,000 samples of wild rice dishes prepared by the Sioux Chef, Sean Sherman and his staff, were given to the visitors at the AIMIC table. Presentations in French, through translators, communicated the process of harvesting the wild rice known as “Riz Sauvauge” in French. The differences between patty rice and true organic wild rice were also explained. Over 750 bags of White Earth’s Organically Certified Wild Rice were sold at the Foire de Tours. It was common for visitors to sample and purchase a bag of wild rice and then return the following day to buy more.

The visitors also purchased AIM merchandise such as patches, hats, postcards and beadwork. Some of the visitors spoke English and American Indian history and culture was shared, and some lifelong friendships were forged. The visitors who spoke limited English conveyed a message of love and mutual respect to AIMIC staff and volunteers.

Visitors could also try wild rice at the L’étoile du Nord (Star of the North) restaurant whose menu was put together by the Sioux Chef and his staff. Over 350 pounds of wild rice was served as Chef Sherman incorporated wild rice into all of the dishes, including Indian tacos, walleye, venison, and buffalo. Food presentations were given by Sherman at the restaurant, which was packed with visitors and other chefs who wanted to learn about the benefits of eating wild rice and traditional American Indian foods.

The trip to Tours was a great success and the time spent was invaluable in teaching the French about our culture and developing lasting meaningful relationships.  With the success and the growing interest for wild rice, the AIMIC is currently working on developing a wider distribution chain for wild rice and expanding into the European market.