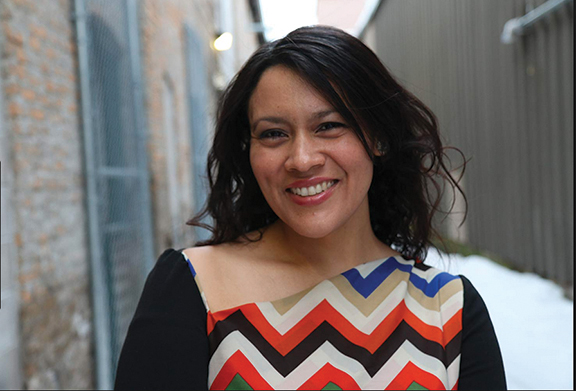 “What does it take to nurture the heart of a Native artist?” This question drove Rhiana Yazzie, a Navajo playwright and director, to undertake the formidable task of creating New Native Theatre in the Twin Cities in 2009.

New Native Theatre was made for and by Native American artists to cultivate authentic theater productions for Minnesota’s eleven Tribal nations, urban American Indian community and beyond. This year marks the theater’s tenth anniversary. Throughout the past decade, New Native Theatre devised numerous productions – from the recent world premiere of “Red Running into Water,” to community-created plays like, “Native Woman the Musical.”

“Seeing the effect that bringing this professional theater to Native community members who have never been on stage or have had to play hidden parts to be on stage, has been utterly transforming,” Yazzie said.

Her reflections on the emergence and exponential growth of New Native Theatre convey the impact of the theater on Native American communities, and the theater industry writ large.

The blueprint for the theater can be traced to Yazzie’s time growing up in Albuquerque, New Mexico. Yazzie remembers herself as an especially expressive, performative child who clamored to the stage as early as kindergarten. Adorned in a home-sewn green shirt, she played an elf in her elementary school’s Christmas play, twirling around a table and devouring cookies on cue. “That was my very first play,” she said. “I loved it.”

But Yazzie also had an early appetite for weaving together stories. She started to see herself as a writer as early as middle school. She even wrote a screenplay for her class to film and act out on Albuquerque’s Channel 27 news.

After earning a degree in theater from the University of New Mexico, Yazzie launched into graduate studies in Los Angeles. With a theater scene led by non-Native people, Yazzie kept her personal goals close to heart. She strove to write stories that she, as a Navajo women, would find meaning in. Yazzie yearned to witness Natives in plays, but rarely did she find herself represented.

To Yazzie, theater’s chronic deficiencies fueled her determination to disrupt the systems that failed to serve Native artists. Ultimately, her heightened awareness of the inequity in the theater industry catalyzed Yazzie to devote her life to uplifting and leveraging power for Native American actors in theater.

In 2006, Yazzie found her life uprooted in pursuit of this ambitious goal. She received a Playwrights’ Center Jerome Fellowship in Minneapolis to write and produce plays. Little did she know that Minneapolis would become her home for the coming decade and catapult her career.

When she arrived in Minneapolis in 2009, Yazzie exited the freeway and drove east, straight down Franklin Avenue along the American Indian Cultural Corridor. “I was blown away, she said. She remembered thinking, “Native people here are really visible.”

Despite the warmth and sense of belonging she felt from her first interactions at the Wolves Den or Minneapolis American Indian Center, her encounters on the theater scene proved disheartening. “I was super surprised at its lack of diversity,” she recalled. “There were quite a few people who were super ignorant about Native peoples’ existence.”

The racism embedded in theater institutions throughout Minneapolis directly affected Yazzie’s ability to develop her plays too, she said. She struggled to find Native American actors for her scripts, and the necessary resources to reach her goals. Yazzie found herself turned away from seminal theater organizations again and again.

“The culture wasn’t really ready for Native work, especially the kind of Native work that I was writing,” she said. “I was writing plays that Native people would find relevant. I was not writing plays for white people.” Yazzie aspired to do what the theater world told her was impossible: develop professional plays rooted in Native American experiences for the big stage, she said.

Just three years after arriving in Minneapolis, she made a decision that would come to shape her life for the next decade.

“When doors were closing to me, when the Guthrie wouldn’t even entertain the idea of a Native person on their premises, I had to open different doors for myself,” she said.

With the encouragement of elders and community members in Minneapolis, Yazzie started New Native Theatre in 2009. At the new theater, Yazzie strove to provide culturally specific training and acting opportunities so that Native artists facing similar struggles in the dominant theater industry could thrive.

Andrea Fairbanks is an Anishinaabe actor, dancer and mother who has been involved in New Native Theatre since its inception. Before meeting Yazzie and becoming involved in theater, Fairbanks said she rarely saw Native American actors cast in Twin Cities’ plays. She only found them playing a white man’s love interest or a peripheral, stereotyped character, she said.

“There were no fierce Native women, there was no one who was who we really were,” she said. “Why are the women only side pieces?”

Fairbanks met Yazzie during a night of karaoke at Wolves Den before the theater opened. “Rhiana took me in under her wing,” recalled Fairbanks. With Yazzie’s guidance, the curious actor immersed herself in all thing’s theater, including productions at New Native Theatre.

If Yazzie landed a commission for a play, she found a way to collaborate with Fairbanks and other local Native American artists. She also leveraged her access in the theater world to help them obtain commissions themselves.

Now a decade later, Fairbanks believes New Native Theatre changed her life, and many of her fellow actors, for the better. “If it wasn’t for New Native Theatre, there would be so many people who would never have even thought to have this [acting] opportunity. Rhiana nurtured these actors and made a place available,” Fairbanks said.

New Native Theatre operates with an open-door policy. All who are interested – no matter the level of acting experience – are invited. To learn more, email Rhiana Yazzie at info@newnativetheatre.org