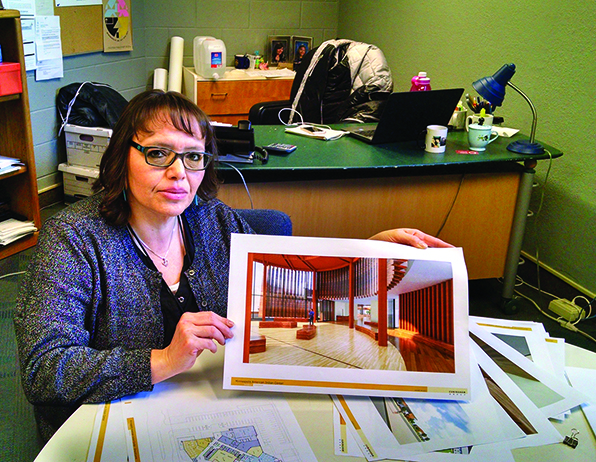 Architectural and engineering studies are being considered for what may become a $12 million to $14 million expansion and modern remodeling project for the Minneapolis American Indian Center.

Late in February, the Center’s board of directors and planners were giving final touches to the plans and cost estimates. The preliminary work and feasibility study calls for adding 25,000 square feet to the existing 47,000-square foot building and moving it closer to Franklin Avenue on the American Indian Cultural Corridor.

Mary LaGarde, executive director, said she and colleagues have been in contact with State Rep. Karen Clark (DFL-Minneapolis), the area legislator, who will introduce legislation in the current Minnesota Legislature session seeking $7.6 million for design and construction in the state’s forthcoming bonding bill.

Reps. Allen, Jamie Becker-Finn, Peggy Flanagan and Mary Kunesh-Podein are part of the Legislature’s first Native American caucus and they joined with representatives from other ethnic communities to form a larger POCI (People of Color and Indigenous) caucus in the Legislature.

Both Clark and Allen have announced they will not seek reelection in this year’s elections.

The center, located at 1530 East Franklin Ave., was built in 1975. It is now one of the oldest such cultural centers in the United States.

LaGarde said the plans call for making most areas of the center, such as meeting rooms and the Gatherings Café, on the ground level and more accessible for elders. The café itself will be relocated closer to Franklin Avenue to be more convenient for street traffic.

The initial design and feasibility studies were conducted by the multinational Cuningham Group Architecture firm, based in Minneapolis, and an affiliated unit that specializes in Native American culture and architectural design work.

LaGarde, who became executive director in 2013, said the center wants to become more sustainable from its operations and less dependent on grants from tribes, nonprofit organizations and government programs.

As such, she said, the expanded and remodeled center should serve even more broadly as a community center for its South Minneapolis neighborhood while at the same time expanding its role in promoting the center’s cultural mission and services for the metro Native community.

Space rental for events would become a bigger source of community use, and revenue generating. Another plan under consideration would be renting shared space, for social enterprises and groups that want inexpensive or part-time office space without encountering high-cost offices or suites in Minneapolis.

The latter shared space would work like other sites in the Twin Cities, such as the old trading floor at the Minneapolis Grain Exchange, and a similar shared space location for start-ups and entrepreneurs near the Lowertown area of St. Paul, LaGarde said.

Another new feature that would serve both the Native community and its neighbors would be a theater inside the center. “We would love to have a theater company housed here,” LaGarde said.

At the core of the plans, however, are adjustments and refinements that reflect changes brought by 40-plus years of technology introductions and wear and tear.

The center identifies these as wanting to reduce operating costs through energy efficient systems and designs, improve access and security for staff, visitors and program participants, and support community identified needs for gathering places for cultural, social, arts and sports activities for the Native community.

This can be done, the center reveals in their prospective capital campaign fact sheet, by updating the 1970s era electrical, communications and accessibility equipment and structures with more modern sustainable design and energy efficiency and by expanding office, program and meeting spaces to better utilize existing space.

Moving entrances and ground-floor activities closer to Franklin Avenue would help a number of center-based operations, LaGarde said, while making access far better for elders and people with physical conditions.

That would help Two Rivers Gallery, currently housed behind the main entranceway; the Gatherings Café and its culinary training program for young Natives interested in food service careers.

LaGarde said the plans call for expanding and making the physical exercise area and equipment more accessible. That also supports several of the community service programs housed at the center, programs that are not well known outside the South Minneapolis neighborhood.