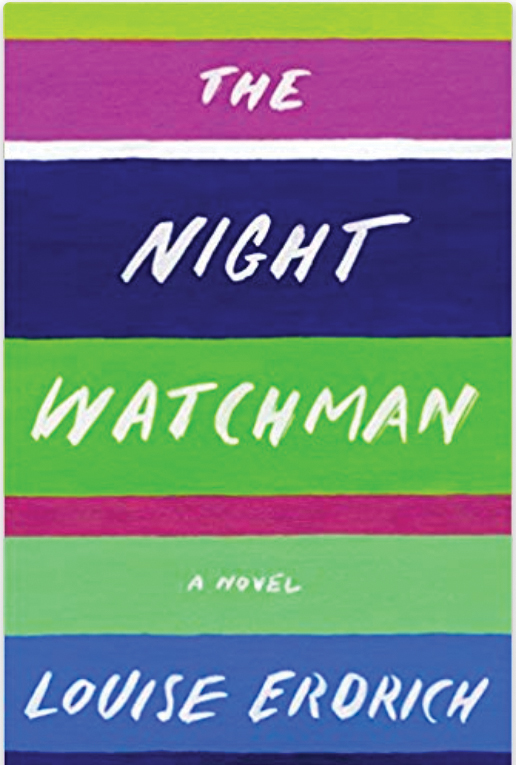 In her latest novel “The Night Watchman,” Louise Erdrich tells the story of her grandfather, Patrick Gourneau, and his 1950s battle with a federal government that wanted to terminate American Indian reservations including the Turtle Mountain Band of Chippewa in North Dakota. It’s Erdrich’s first introduction of family members as characters.

Woven through the story of the band’s campaign of resistance is Erdrich’s portrayal of reservation and urban life and her memorable characters. The primary character is Thomas Wazhushk, who is based on Erdrich’s real life grandfather, Patrick Gourneau.
Like Grandpa Gourneau, Thomas works as a night watchman at a jewel bearing plant that employs mostly Chippewa women. Those women are a reminder of ordinary and extraordinary events from the 1950s when no law protected workers from work-related injury, and American Indian women on and off the reservation were treated like props and disposable objects. It was a time when boxing matches at the local community center drew large crowds, and when little news of the outside world reached the Chippewa.

News of the 1953 Indian termination bill reached Moses, the Turtle Mountain judge who brought a copy to Thomas who puzzled over the bill’s meaning. At the same time that band elders formulated plans to oppose the bill, Patrice Paranteau, who worked at the plant, traveled to Minneapolis to find her sister Vera who had been forced into prostitution.

In order to locate Vera, Patrice was advised to find the “scum” in Minneapolis, but what she discovered was far worse than mere scum. She walked into the violent underbelly of the city where women were grossly objectified for men’s amusement, and where violence against women was common.

Those two story threads held my attention. First, would Vera return home safely, and second, how could Thomas, with his small but fierce group of band members, effectively confront the federal legislators who wanted to “emancipate” the Chippewa by dissolving the reservation.

Erdrich was so clever that way, intersecting fiction and actual events that left the reader both enlightened and disturbed. Her depiction of violence against American Indian women stemmed from a 2011 study from William Mitchell College of Law on prostitution and trafficking of Indian women in Minnesota. With regard to the Turtle Mountain resistance efforts, some dialogue from the book’s depiction of the March 1954 Joint Hearing on Indian “emancipation” was taken directly from the Congressional Record, adding authenticity to the story.

Still, there’s plenty of examples throughout the book for Erdrich’s trademark lyrical language, ghostly mysticism, and a steely resolve for American Indian survival that runs through all her books. In an afterward, Erdrich wrote that she learned of 1950s reservation life from her mother. That explained the ring of truth from a time when long distance travel was by railcar, fashionable women wore circle skirts and red lipstick, and boxing matches in community centers drew large crowds.

It was also a time of hardship and hunger. North Dakota Chippewa lived off the land with little federal assistance, relying on snared rabbits for food, hunting for game, gardening, and medicinal cures from plants and trees. Erdrich’s grandfather, Patrick Gurneau, led the courageous journey to Washington D.C. following months of letter writing to local, state and federal officials, and sleepless nights of worry. Months earlier a group of Turtle Mountain band members met with the Bureau of Indian Affairs in Fargo. When recounting that meeting, Erdrich wrote:

“All twelve of the people there did not speak English, or understood it very poorly, and yet they had gone to great effort and expense to come to this meeting. As the words tapped out like dry little hammers, Thomas thought about the places where his people lived…They drew their water from sloughs or tiny springs, lighted their homes with kerosene. Yet here they were, each person, presenting themselves in worn immaculate clothing. As Indians had for generation after generation, they were attempting to understand a white man reading endlessly from a sheaf of papers.”

The family of Patrick/Thomas worried about his health, with good reason. You get the feeling that fund raising for the journey to Washington D.C. consumed almost as much time as hearing preparation. Erdrich wrote that for centuries, “Indians had gone to Washington for the same reason as the little party from the Turtle Mountains. They had gone in order to protect their families and their land.”

It’s fitting that this book was published in the spring, because at the book’s end, Patrice Paranteau joined her mother to collect sap from birch trees. The two women drank the water, “which entered them the way life entered the trees, causing buds to swell along the branches. Patrice…put her ear to the trunk of a birch tree. She could hear the humming rush of the tree drinking from the earth.”

Few writers could describe spring birch water as well. Few could build a character like Thomas with such skill that you feel you have known Patrick Gourneau all your life. He’s your dad, your uncle, your grandpa: the man of integrity and foresight, the watchman whose eyes and heart guard against the threat of termination.