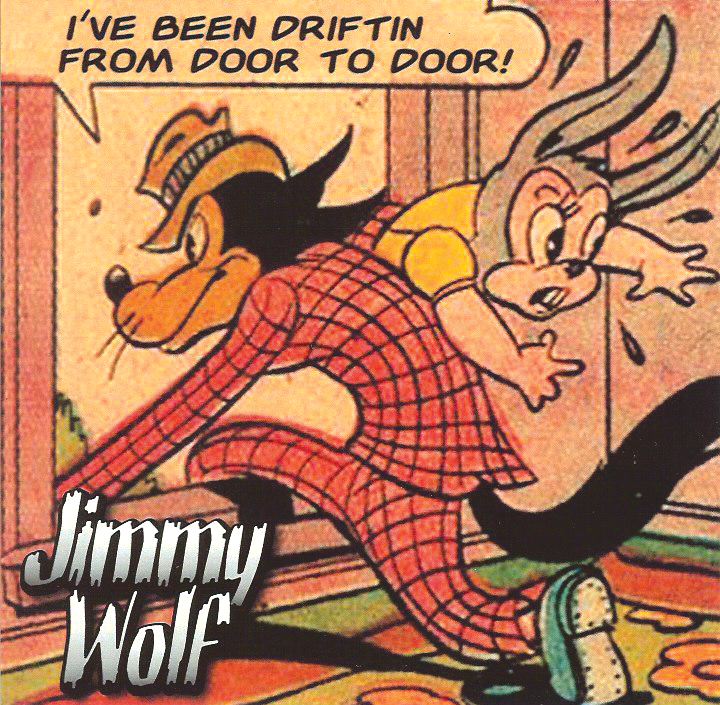 Last year I wrote a review on Jimmy Wolf’s CD Deep Downtown and I was immediately aware that there was a new rock star, jazz monster guitar master to contend with in our community – whose resume is as long as your arm. He is unique in his approach to his craft and his playing suits my bike riding style to a tee.
Wolf was nominated 3 times for best blues recording at the 1999, 2000 and 2008 Native American Music Awards; nominated for Best Blues recording at the 2008 Syracuse Area Music Awards; and awarded First Nations Composer & American Composers Forum Grant for outstanding performance and lasting contribution in 2008. He was also named the best blues release at the 10th Annual Native American Music Awards in 2008.
The title song of the CD, Driftin’ From Door To Door (originally composed by John Lee Hooker), has a real nice groove with a solid rhythm section foundation. The song addresses a life style change from the way things used to be and now that he’s found a stable relationship, “There ain’t no driftin’ from door to door” even though he used to.
Hell Hound On My Trail is a cover of a song originally penned by the inimitable and mysterious Robert Johnson considered by some to be the “Grandfather of Rock ‘n’ Roll”. This version of this song is dirty and low, slow but blistering. Ominous – sounds like a hellhound. The delay on the vocal adds to that image.
The third track, Walt’s Circle, is good funky blues. The song is about taking a look at a bar scene, “Down at Walt’s Circle”. Got some nasty tenor sax playin’ in there. This is a strong cut. “They keep dancin’ down at Walt’s Circle Bar.” Horn chords’ backing the solo is an idea whose time has come for Jimmy. I applaud him for venturing into this territory.
Wild Irish Rose is a song in honor of a wino’s beverage of choice. A woman that drinks this stuff is double trouble, but not necessarily more trouble than she’s worth. There is always a tinge of the old raw Jimi Hendrix in Mr. Wolf’s playing. It’s one of the reasons I enjoy his playing so much. It takes me back to another time when rock power trios were in abundance.
My Mind Is Ramblin is a Howlin’ Wolf (Chester Burnett) original, again with the funk blues thing. This is the thing that Jimmy and the fellas do so well, with solid guitar work and a great rhythm section. They are most assuredly on time.
Tail Dragger is a cover of a song originally written by Howlin’ Wolf and covered by the likes of Stevie Ray Vaughn and others. With some sweet slide work on the intro it moves into a funky guitar groove under a smooth and cool vocal. Jimmy is an all around blues man as he plays a blistering harmonica that compliments his baritone guitar licks nicely. It is brilliant genius that allows a musician like Jimmy to pursue these traditions with courage and commitment.
I appreciate the fact that there’s only one “Native” oriented song, Indian Hawk, on this CD and I appreciate the fact that he ends his CD with it even more. Blues is still the blues no matter who invented it. There’s a Native quality to this song but it also crosses over into what is traditionally recognized as blues. The hard edged chord progression implies a connection to a traditional Native philosophy.
The song is performed with spare instrumentation, Jimmy and his baritone guitar and a tambourine, Jimmy on vocal. Something spare like this is to be recognized for what it is. It don’t take much to make a joyful noise, does it Jimmy?