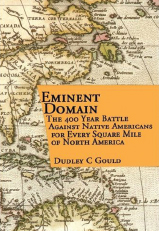 After the War for Independence, the stage was set for wholesale theft of Indian lands, for all Indians bore the stigma, real or presumed, of being enemy because many in the North and the South, including the Six Nations, aided the British.They were told they had been on the losing side and according to white man’s customs must surrender territory as reparation. Eminent Domain documents the theft of North America by deceitful Europeans and their descendants from Native peoples. Had the Indians banded together and hired a smart international lawyer, had there been one, it would have done them no good for there was no international judge or jury such as The World Court and UN Security Council. They were doomed by the white men’s arms, diseases and dishonesty to lose everything.