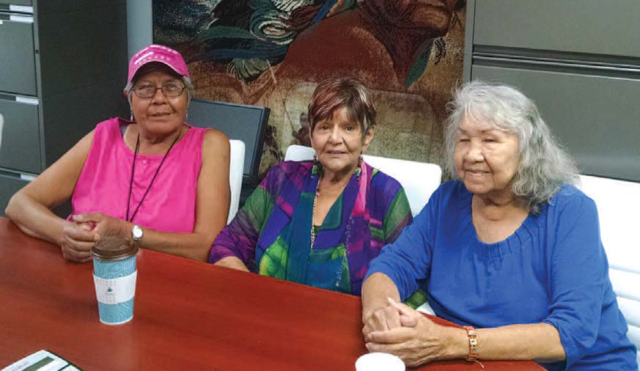 The growing and unmet needs for Native health and home care weren’t going away. Patricia (Pat) Yager, who grew up at Bena on the Leech Lake Indian Reservation and bounced back and forth between Cass Lake-Bena and as an urban dweller in the Twin Cities, knew she needed to become an entrepreneur in order to con-tribute to making life better for elder friends and relatives.

The planning started in 2003. Two years later, Circle of Life Anishinaabe was formed as a licensed home care provider in Minnesota. Within six months it expanded from its base in Minneapolis back to Cass Lake to find and train personal care attendants (PCAs) and nurses for home care clients.

The rapid growth of Circle of Life Home Care, as her company is known away from its Ojibwe roots, is a testament to the enormous need for culturally appropriate home and health care. Circle of Life now has 1,600 employees working out of 20 offices in seven states.

“I don’t know how I did it. It was a matter of just keeping on moving forward,” she said during a recent interview at her national headquarters on Franklin Avenue in Minneapolis’ American Indian Cultural Corridor.

Both in the metro area and back home at Leech Lake, changing demographics were making home care more difficult for elders and for people with special health care needs. The cultural norm over decades and generations was for Native family members to be caregivers. That is still the case, Yager said.

But this in-family caring didn’t always produce the historically sought results. Matching talents to home care isn’t always easy for some families, and more and more Native families – like all other Americans – find it necessary to become two-income family households. Taking care of a grandparent or other relative with needs usually didn’t produce much income or position the caregivers with employment records that could lead to securing auto loans, mortgages or even health insurance for their families.

That is especially true on reservations and in rural settings.

Starting the Circle of Life operation “had been on my mind for several years,” she said. “I knew I had to help out and make a difference.”

One of the beneficiaries of Circle of Life services, Margie LaMorie – a retired educator living in Minneapolis – is representative of urban experiences. Originally from the Lac Courte Oreilles Tribe in Wisconsin, LaMorie suffered a stroke seven years ago after her husband died. Staying in her home required health care assistance.

Magi Spears (Red Lake), of White Bear Lake, is the licensed caregiver who stops by LaMorie’s home three days a week and checks on her food and medicine supply, meal preparation, schedules and transportation needs.

But more assistance was needed initially. “Magi helped in feeding me, in making me lunch,” LaMorie said. And, she found a financial worker “who helped me budgeting to get through.”

LaMorie is one of three clients Spears visits and provides services for each week, she said.

While recovering from health problems now, LaMorie is typical of home and health care needs of Native people, Yager said.

It doesn’t matter if you are Ojibwe, Dakota or from any other tribal group across America. Yager said “It just isn’t in our (shared) Indian culture to ask for help.” This is where trained personal care attendants can become important advocates and problem solvers for people with needs.

Meeting such needs here at home in Minnesota triggered her pursuit of a Native-owned, Native-operated home care service company. By coincidence, Yager was in Gallup, N.M., within a year of expanding from Minneapolis to Cass Lake, and found the same problems to be widespread on the Navajo Reservation.

The Circle of Life group now has three operating companies overseeing 20 offices and their personal care attendants and nurses. The Soaring Eagles group in the Southwest now provides services for Navajo, Apache, Zuni and Hopi tribes from offices in Arizona and New Mexico.

The company is now expanding into a seventh state, beginning operations of Circle of Life Colorado.

“I would say 85 percent, or more likely 90 percent, of our employees are Native people like Magi (Spears),” she said.

State and local governments have different licensing requirements for PCAs and nurses, and some of the companies’ nurses are non-Natives living and serving in Indian Country, she added.

The headquarters staff reflects the commitment to matching appropriate talents with personal and cultural awareness.

Chief executive officer since January, for instance, is Himmat Singh, originally from India with international management experience with manufacturing companies, real estate and software development. He has a bachelor’s degree from George Washington University and a MBA in Entrepreneurial Management from the Wharton School, University of Pennsylvania.

Executive director is Samuel (Rocky) Papasadora (Leech Lake Ojibwe), with past experience with tribal and Minnesota law enforcement and with Leech Lake Band of Ojibwe and national gaming regulatory groups.

More information about Circle of Life Home Care and how to seek services is available at their website: www.circleoflifehc.com.

A new video on how Pat Yager built the company is available online at https://youtu.be/TdBiwM95U-Q.