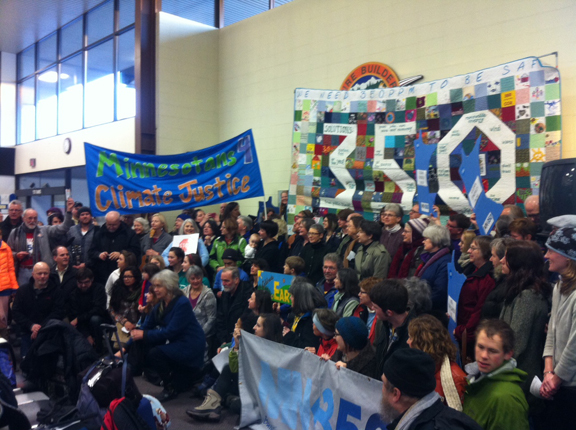 Acclaimed Anishinabe author Louise Erdrich was one of about 70 Minnesotans who boarded the Earth Train bound for the Forward on Climate Rally in Washington, D.C. The Earth Train pulled out of the Saint Paul Amtrak

station at 7:50am on February 15 amidst a flash-mob style send-off, including a rendition of Cat Stevens’s Peace Train and personal pledges by members embarking on the trip.

In addition to the passengers on the train, two busloads of Minnesotans journeyed to the National Mall for the rally on February 17. According to James Lenfestey, an Earth Train passenger, the Minnesotan contingent at the Forward on Climate Rally numbered about 200 people,

making them the second largest group

present. The New York Times reported that the event was the largest climate change rally held at the Capitol in the nation’s

The Earth Train concept was born when Erdrich, James Lenfestey, and his wife, Susan Lenfestey, attended a

lecture by Bill McKibben at the University of Minnesota on November 30, 2012. McKibben, a noted climate change author and the founder of

environmental advocacy organization 350.org, urged supporters to join him at the Forward on Climate Rally.

"We thought taking a train would be the best answer to both getting there and making a statement about how much we need a rail system in our country," said Erdrich. "There should be this kind of connection, because that’s the most efficient way to get places."

"We realized that the climate change movement parallels many of the major issues for Native America right now, and that is resource extraction and the

tremendous toll it is taking on Native communities," said Erdrich. "So, when the bookstore took this interest and decided to add to our Native section an in-depth section on climate change, we began to look seriously at that connection."

Several Indigenous leaders and groups whose land and people have been affected by resource extraction were present at the rally. Namely, opponents of the Keystone pipeline and its planned expansion, generally referred to as Keystone XL, spoke to rally attendees. One of these speakers was Chief Jacqueline Thomas of the Saik’uz First Nation in British Columbia.

The goal of the rally was to pressure President Obama to reject the Keystone XL pipeline permit and encourage the President and Congress to work toward national cap and trade and carbon tax programs.

"The rally was called Forward on Climate because we wanted to show the President, Congress, and the American people that there’s a public will behind this unfolding disaster on the climate," said Lenfestey.

Moving forward, Lenfestey and others involved in the climate change movement are urging universities, religious organizations, and other groups to divest in fossil fuels.

"We have to see climate change as a moral issue, which it certainly is, in addition to a mechanical issue, a scientific issue and a political issue," said Lenfestey. "It asks everyone who has investments to take this step, including large investments."

Erdrich encourages everyone to do what they can to to conserve energy.

"The next thing is, I think we each need to do what we can do. I’m working on solar panels, working on how to conserve energy," she said. "I think the main thing is to band together and realize that this is the biggest threat that our species has ever faced together."