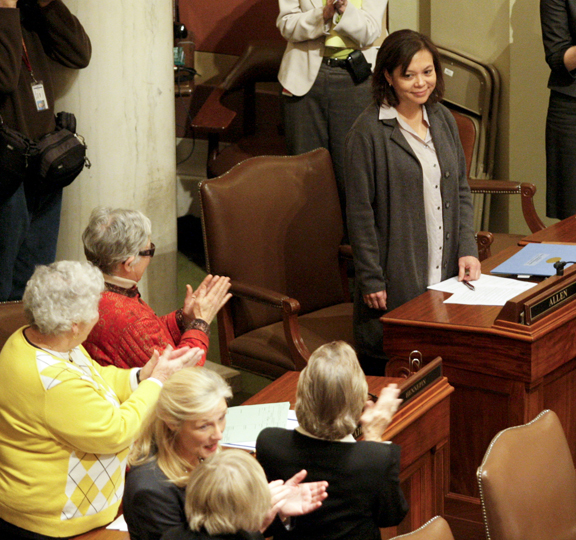 State Rep. Susan Allen became the first Native American (Rose Bud Sioux)?woman to serve in the Minnesota State Legislature. Allen is an attorney and a partner with Fredericks, Peebles & Morgan LLP.  A member of the state’s Democratic Farmer Labor [DFL] party, Allen, who represents District 61B, discusses her role and goals for her term in office.

Jamie: My first question is – why did you decide to run for state legislature?

Rep. Allen: I saw it as an opportunity. I work on behalf of tribes and non-profit organizations in the community, so it’s a continuation of the work I’ve been doing and a lifelong commitment to working for social and economic justice. I always tell people that my whole life has prepared me for this.

Jamie: What does the Native American community look like in your district? How many Native people live here? How were people from the Native community involved in your campaign?

Jamie: What are some of your goals as a state representative?

Rep. Allen: Initially, it’s to work on jobs. There’s the governor’s job bill, which the DFL supports, and I think we’ll get to it, but right now we’re dealing with the GOP agenda with Tort reform. The other is getting out the vote, so that in 2012 we can take back the house and the senate for the DFL party and get Obama reelected.

Jamie: What issues and pieces of legislation do you plan to focus on during your term? Creating jobs?

Rep. Allen: Yes, but I’m also focusing on [getting] bonding projects included into the bill that will directly benefit our community. One they’ve been working on a long time before I got there is building a swimming pool in the Phillips neighborhood. Healthcare is a big issue because it’s a lot of policy decisions that effect what the exchange is going to look like, what the minimum benefits are going to be, what the state’s going to pay for. The state is going to form its own exchange rather than having it imposed by the federal government.

Jamie: So it’s going to be different state by state?

Rep. Allen: Right. I think healthcare and jobs are the two things we can make progress on. We’re putting all our energy into that. It’s difficult, because you hear people say "We need help now," but it’s not something that the GOP is interested in now. Their idea is that the government doesn’t create jobs, but that businesses do, so anything you can do to reduce the burden of taxes and regulations, that’s their agenda. They want to privatize government, but what would that look like? We have privatization of health care and that doesn’t work at all. I think we put too much hope, and it’s unrealistic sometimes, our expectations for elected officials. That was evident in my election – you had 43% that voted independent, and they were rejecting the two-party system because it didn’t resonate with the community. I don’t know that you can say it’s ever worked, but it’s our government. It’s hard to get people interested in getting the house back for the DFL party because they want jobs, they want to feel like the education system is responsive and equitable, and they’re worried about healthcare and affordable housing.

Jamie: You talked about job creation and healthcare, which greatly impact Native communities, but are there any initiatives you plan to work on specifically in relation to the Native community?

Jamie: Stories covering your election have been in the national press recently. What’s been the response to those articles?

Rep. Allen: There was a story about me when I first got elected in Indian Country Today saying that I was the first openly lesbian American Indian to serve in the state legislature anywhere. The story was on Facebook, so it was American Indian people commenting nationwide. Over half the comments were homophobic. In the American Indian community, that’s something that’s in our culture that we have an understanding of, but we don’t know how to talk about. When we do talk about it, we tend to adopt the mainstream rhetoric. That was something I knew was there, I just… didn’t realize how pervasive it was.

Jamie: How have you found ways to talk about that issue?

Rep. Allen: One way is to talk about gender and that it’s fluid. When 9, 10 year-olds are bullied because they don’t fit within the typical gender roles… at that point, it’s not about that they’re gay or lesbian. How do we be accepting of where somebody is and who they are? In our culture, we’re taught that children are sacred, that our identity and self-worth should be sacred. All this focus on gender and homophobic comments, it’s not consistent with our culture and it’s harmful to our children. That’s how I talk about it.

Jamie: How do you think being part of Native and LGBTQ communities have influenced your approach to your new role?

Rep. Allen: It’s one of the reasons I ran. I talk about my campaign being a voice for those left out, so, to me, it’s about integration. All of our policies and history are about assimilation. We want people to speak English, be educated in a certain way, live in certain houses, and drive certain cars. It doesn’t respect our differences or cultural values. If we have fundraisers for nonprofits, we have to schedule them during the day because people will not come here at nighttime. It’s going to take awhile for people to stop being afraid of us. The only way is for people to have more interactions in a way that’s safe, so minority people don’t feel that they’re being imposed upon or told what to do, or that they have to give up their identity. It’s frustrating because we could add so much to the process. Minority groups are organizing, and I think at some point they’ll have candidates so that when a seat opens up, they’ll be ready. I think we’re moving toward that direction so that our leaders come from our community. It’s where you learn how to organize in ways that are culturally appropriate, in your own language, and you build a sense of community. It’s just a matter of time.