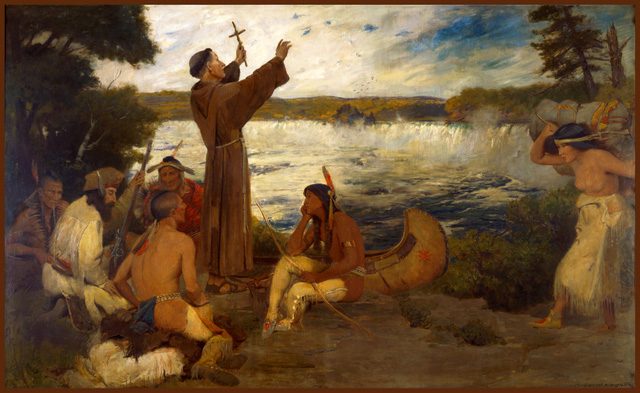 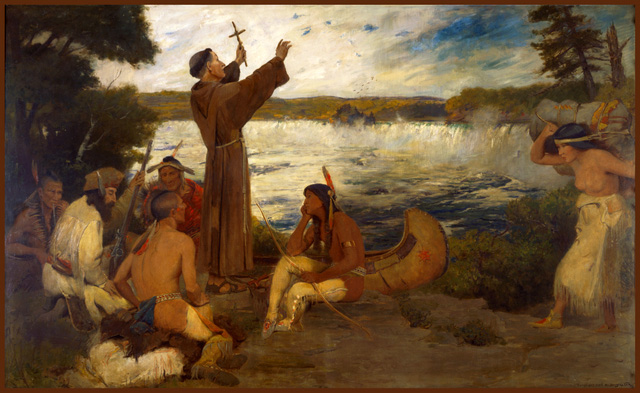 Treaty of Traverse des Sioux (Governor’s Reception Room): The Dakota ceded almost all of their land in this 1851 treaty. The painting depicts the negotiation as calm and fair. It was not.

Battle of Killdeer Mountain (3rd floor conference room): This 1864 battle, Minnesota troops had been sent far into Dakota Territory to punish Dakota people for the 1862 war and create access to western gold fields. The painting shows Minnesota troops firing on an Indian encampment. Many Dakota and Lakota under attack were not hostile to the U.S. and had nothing to do with the 1862 war.

Minnesota–Spirit of Government (House Chambers): This sculpture includes the saying: “The Trail of the Pioneer Bore the Footprints of Liberty.” Rep. Diane Loeffler, the Art Subcommittee tri-chair, has suggested removing those words.

At minimum, this art needs better interpretation so people know the history and symbolism. Better yet, some art should be moved to a museum.

The solution also needs to include adding new art that reflects our state’s current cultural diversity. Thousands of school children tour the capitol each year, students of all colors. There is little in the current art that tells children of color they belong in the capitol.

The good news is that the capitol renovation is creating space for new art. The Art Subcommittee created a statement of purpose for capitol art, which points in the right direction: “The purpose of art in the Minnesota State capitol is to tell Minnesota stories. Works of art in the Capitol should engage people in reflecting on our state’s history, understanding our government, recognizing the contributions of our diverse peoples, inspiring citizen engagement, [and] appreciating the varied landscapes of our state.”

How would the presence of student art change the capitol’s atmosphere? Above is one example, artwork done last spring by Oshki sixth grader Ariana Poyirier of the Marten clan. Here is her artist statement: “Eagle Woman: My painting is of a transformation of eagle to girl/girl to eagle. The image has to do with my connection to the eagle. The eagle is important to me and to my community and a symbol of our culture. To me, my painting reminds me of my Grandma. Family is important in our culture. We are connected. Cedar and beadwork on the border … are also important to my culture. We drink cedar tea by boiling it in water. It is used for medicine. I put the beads around the girl because I do beadwork. This is a traditional craft in our culture. I am proud to be a Native American from Grand Portage and I am part of Minnesota.”

Sign the petition asking the state to remove the most offensive art at: http://tinyurl.com/oz8xdzo.