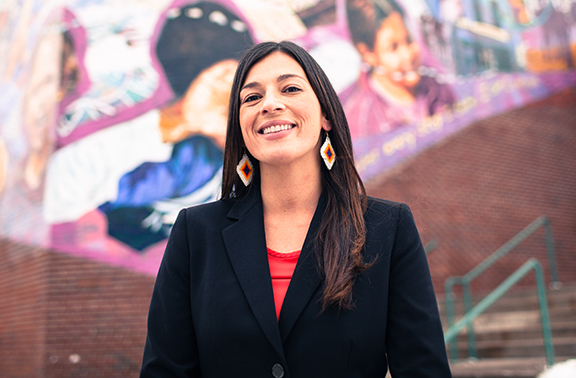 “I am answering a call to serve,” asserted Korina Barry (Leech Lake Band of Ojibwe) as she announced that she will seek the District 62B seat in the House of Representatives.

“This is a commitment I am undertaking,” Barry continued. “In this role, I have to hear and listen to my community members and bring those issues forward.”

When we sat down for tea together on a cold January evening Barry, in an impassioned tone, began sharing the stories that brought her to this moment. Within minutes, it became evident that Barry intends to bring her considerable experiences as a community organizer, educator, and social worker to the legislature.

Barry takes pride in being born and raised in South Minneapolis. Currently, she resides in the Field neighborhood.

From the moment Barry made the announcement to run in December 2017, her commitment to advocate for communities most directly impacted by inequitable policy continues to define her platform. What stands out most is her tenacious dedication to children and families, particularly those navigating the child welfare system.

As a licensed social worker, Barry currently serves as the Director of Outreach at the Center for Advanced Studies in Child Welfare (CASCW), a research and training center at the University of Minnesota. Within her role, she collaborates across the university with faculty, building training resources for child welfare professionals.

But her work does not end there.

“I also work closely with tribes, the state, and other community partners around training and resource development for front line social workers and workers in child welfare,” she explains. She ensures that social workers serving the most vulnerable families in the city are prepared.

“[Our services] try to capture the diversity and unique needs of the families we see come through Minnesota’s child welfare system – whether they are immigrant and refugee families, families with a parent with a disability, or Native families,” Barry explained.

In addition, Barry keeps a close eye on developments happening in the legislature, synthesizing any changes that impact child welfare systems.

She breaks it down: “I manage our public policy efforts at the center which is really all around making policy more accessible to the public, to the professional social workers, and child welfare professionals.”

That means Barry keeps up to date on proposed bills or the formation of committees in the legislature, digesting any developments in the form of policy briefs. With this knowledge in hand, Barry strives to help the general public know how new legislation impacts them, especially if they are a parent, foster parent, or social worker.

Barry’s earnest gaze imparts the complexity of her decision to transition from direct service to policy work. She said, “I really enjoy working with families and children. But we need more people, and especially more Native people and people of color closer to policy – understanding it and knowing what it means and how it is impacting us.”

As a social worker, Barry feels that she is “putting out fires every day.” In her mind, one of the reasons professionals find themselves situated in such a reactive position is due to the lack of investment in prevention efforts and community well-being in Minneapolis.

“We have families of color and families living in poverty coming in contact with this system. They are already at high-risk and high-need for support, but all our systems are over tapped.”

That said, Barry foresees her shift toward policy as one which will be deeply informed by her experience enveloped in the child welfare system.

A Legacy of Native Women

Incumbent Representative Susan Allen (Rosebud Sioux Tribe) is currently serving District 62B and recently announced she will not seek reelection in the upcoming election taking place this November.

To Louise Matson, Executive Director of the Division of Indian Labor, Native American voices in the metro area have often be rendered politically invisible. “Often, we are not included in decision making,” Matson states. “Having an Indigenous and Native voice at that table is very, very important […] We need and deserve attention to right some of these wrongs and inequities in education and in health. I think that the [Native] population is deserving of a lot more attention in that way.”

Barry’s campaign manager, Coya White Hat-Artichoker (Rosebud Sioux Tribe), also testified to the importance of electing a Native woman, and Korina Barry specifically, to serve as the Representative of District 62B. “Korina’s background provides her with a view to the issues we are confronting,” White Hat-Artichoker shares. “These are not just Native issues, but issues [faced by] children and families that are living at the margins. I think that it’s perfect to retain the seat for a Native person. Rep. Allan has done an incredible job and she leaves a great legacy.”

Representative Allen assumed the District 62B seat in 2012 becoming the first Native American woman ever elected to the Minnesota legislature. “When I first ran [in 2012], the legislature was 98% White,” she explained to me.

“I’m very honored to have had the chance and to be of public service,” Allen continued. “To me it really is about public service. There was a need at the time when there weren’t many legislators of color and someone with my background and experience.”

Among numerous initiatives, Allen helped form the People of Color and Indigenous Caucus and the first caucus of Native women. Barry’s deferential remarks of Allen make evident the robust legacy she will be leaving.

Barry remains humble as she shares her personal journey, frequently honoring the paths forged inside the legislature by the Native women who have come before her. “What they have left us with and what they have encouraged us [to do] is serve and fight this good fight,” Barry exclaimed.

Being in the Minnesota legislature is one more place that Barry feels called to instigate societal change.

“I bring all of these experiences I have had both personally and professionally to say: ‘I think we can make better decisions for our communities here in the cities, and around the state,’” Barry remarked.

Barry described the experience of being a daughter of two parents struggling with incarceration and addiction. Barry recounted again and again witnessing the harm government neglect can have on low-income families, families of color, and Indigenous communities of Minneapolis.

“My very loving caring parents […] had to grow up fast because of their own life situations,” Barry explains. “They struggled in our schools and found themselves involved in unhealthy spaces and situations.” Barry describes her mother as a “very strong woman who has been through so much in her life, but has constantly been hanging on and fighting for survival.”

Barry cites the alarming reality that nearly half of the state’s prison population are comprised of people of color and Native Americans. For her, the need for criminal justice reform hits close to home.

For Barry’s mother, having felonies on her record translated into being disenfranchised and stuck within cycles of poverty. Barry’s family is not alone in this struggle.

According to The Vera Institute of Justice and The Safety and Justice Challenge study conducted in 2016, nearly 80 percent of women in jail are mothers and about two-thirds of incarcerated women are women of color.

Barry recalls the poignant moment that occurred while visiting her mother while in prison and observing that the overwhelming majority of inmates in the visiting area were women of color.

Her mother would relay to her that many of these women were “women who fought back […] and who may have harmed or killed someone that was hurting and abusing them for years.”

The same study by the Vera Institute also found that 86 percent of women incarcerated in the United States experienced sexual violence, and 77 percent of women have experienced partner violence. Referencing a 2016 study from the National Institute of Justice which found that 84% of American Indian or Alaska Natives have experienced violence in their lifetime, Barry promises to advance legislation to strengthen response to victims of sexual violence, especially for women of color and Indigenous women.

Ultimately, Barry also aims to remove barriers to employment and participation for individuals and families impacted by the criminal justice system. “All those women behind bars are going to have such a similar story to my mom when they get out,” she said.

She remains concerned with the lack of resources individuals and families have when reintegrating into their communities after experiencing incarceration – from secure employment, housing, or health insurance. The candidate’s platform promises to remove obstacles barring people carrying felony convictions from participating in our democratic society.

Supporter Jackie Crowshoe, who has known Barry for over 10 years, voiced her belief that Barry’s professional and life experience make her ready to advance justice for the people of Minneapolis.

“Korina is a strong advocate for the American Indian community, but also a strong advocate for all marginalized groups,” Crowshow said. “We need American Indian women who walk with our traditional values and beliefs, which Korina does. Her passion and commitment to creating better outcomes is to be applauded. She is not afraid to take risks and she walks with integrity.”

Residents of District 62B frequently share their concern about the lack of affordable housing threatening their community when speaking with her.

According to a 2017 MinPost analysis, the rate of unaffordable housing remains high for low income families in Minneapolis. Over 4 out 5 households making less than $20,000 a year spend a disproportionate amount of their income on housing, a rate that is considered a cost burden.

Believing that affordable housing is a human right, Barry asks, “How do we keep more affordable rental units, how do we ensure that people are not being displaced from their communities [due to] the development the luxury condos and apartments? How do we protect those homeowners, but how do we get those folks who are renters to have access to homeownership?”

Barry became a homeowner in the Field neighborhood 3 years ago. With a smile, she explains the significance of this milestone within her family.

“I’m the only person in my family, between my parents and siblings, who owns their own house. It was really thanks to community resources here that I was able to access home buyers classes […] and financial literacy courses.”

Furthermore, Barry’s platform commits to modifying Minnesota’s nondiscrimination and fair housing laws to improve access to transitional and affordable housing, alongside and culturally-competent support for residents.

“We have too many families who don’t have access to safe and affordable housing who don’t have food on their tables. They don’t have their basic needs being met.” To Barry, that reality is not acceptable.

Barry is quick to note that simply because she comes into the campaign with exceptional connections to the communities she will be representing does not mean she has all the answers or can speak for all the voices that make up the quilt of South Minneapolis.

To do so, she intends to lead with listening and advancing the voices that make up District 62B. Central to her philosophy is uplifting community-driven solutions.

“All of this work is never really about me,” she stated. “It’s about asking ‘how do we really make our communities healthier?What is wellness in our communities look like? How do we take our strength and power that we have within our communities and find solutions? We can’t rely on other systems and institutions to do that for us.’”

For Barry, her decision to fight at the legislative level for equal opportunity and greater equity on behalf of her community is a long time coming.

“For me, I’ve spent over 30 years now just wanting someone to listen to me, fighting for that and making a seat for myself at the table,” Barry said. “Other people have that same interest and need. They want to be heard.”