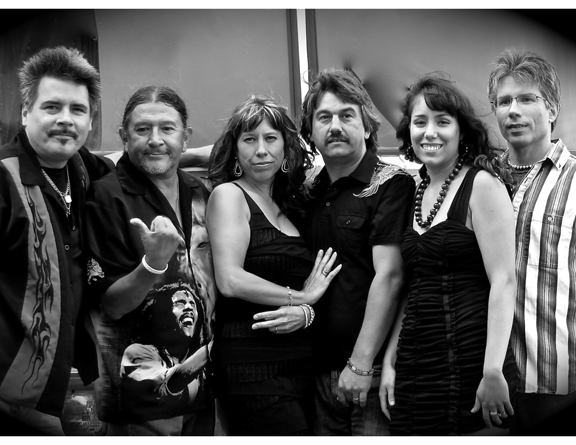 The Minneapolis-based band has also been nominated for Group of the Year and Best Rock Recording of the Year for their most recent album, Just Living The Blues, in this year’s Native American Music Awards (NAMAs). This marks the seventh NAMA nomination the group has received since 2005 when they recorded their debut album, From All Directions. Bluedog was voted Group of the Year in the 2010 NAMAs.

Eric (Ponca), Chair and Associate Professor of American Indian Studies at Augsburg College, and Joni Buffalohead (Dakota), Director of Operations at the Minnesota Indian Women’s Resource Center, co-founded Bluedog in 2001. They wanted an artistic outlet so Joni could sing and Eric could write his own music on the guitar.

“I was playing in another band and wanted to go in a different direction other than just playing other people’s music,” said Eric. “And I wanted to work with Joni singing, so those were some of the motivating factors.”

Along with Eric on lead guitar and Joni performing lead vocals, the band is comprised of the couple’s daughter, Alexandra Buffalohead (Dakota), on backing vocals, keyboard, and organ; Tom Suess, a childhood friend of Eric’s, on bass and backing vocals; Bob Simons (Dakota/Assiniboine) on drums; and Chuck Davis (Lakota), who sits in occasionally as part of the group on percussion. All but two members of the group are relatives, giving the band a close-knit stage presence.

“We’re a family band, and there’s not that many Indian bands playing blues rock music originals,” said Joni. “I like to educate people – they might not know anything about Indian people behind the music, so it’s a way to record history.”

Many of Bluedog’s songs are inspired by the historical and present-day struggles of Native American people.

“Most of the music has to do with everyday life experiences, but there’s always a meaning behind it,” said Joni, who writes most of the band’s song lyrics. “You might think we’re talking about a man and woman’s relationship, but really it can be about the government, so it’s easy to interpret it the way somebody wants to.”

One of Eric’s favorite songs to perform live is “1851,” which Twin Cities Pubic Television plans to use in a documentary about the U.S. Dakota War airing in the summer or fall of this year. The band is currently working with John Oakgrove’s traditional drumming group, The Little Thunderbirds, to re-record “1851” and update the original version.

“There’s definitely a history lesson in it, about Minnesota and the U.S. Dakota War,” said Eric. “It has a very infectious beat, so people really get into it.”

In February of this year, Joni and Alexandra attended the Blues Women International Compilation Project in Hopson, Mississippi with female blues artists from across the United States, Australia, and Canada. For the Hopson Sessions, Joni and Alexandra were challenged to write two original songs on a strict time limit.

“One of the songs is called ‘Indian Country’ – I’m really looking forward to that coming out, because it’s a blues funk song,” said Joni. “There are pretty strong, controversial words in that one, laying it out straight about Native people in the U.S.”

In the past, Bluedog has toured across the United States, playing The Fargo Blues Fest in North Dakota, The Last Ride Blues Fest in Minnesota, the Native American Music Awards in Florida, the Indian Summer Festival in Wisconsin, and the Yakima Tribal Jam in Washington, among others. Along the way, they have played with such notable acts as Los Lonely Boys, Buddy Guy, Indigenous, and John Mayall, a keyboardist and harpist who has toured with Eric Clapton.

“It’s a lot of fun to meet people of that caliber in the business, who are mainstream and internationally known and getting compliments,” said Joni.

The band plans to begin work on a new album soon for release in the winter of 2013.

“We have a lot of new songs, we just have to have the time to finish them up and work with them,” said Eric.

This summer, Bluedog plans to tour with a regional blues festival organized by blues guitarist and producer Little Bobby, who owns Untouchable Studios in Grand Forks, North Dakota. They also plan to perform for the 10th time at the annual Dry Bones Blues Festival X on June 15th at the Dayton Avenue Presbyterian Church in Saint Paul, a sober festival for musicians and attendants alike.