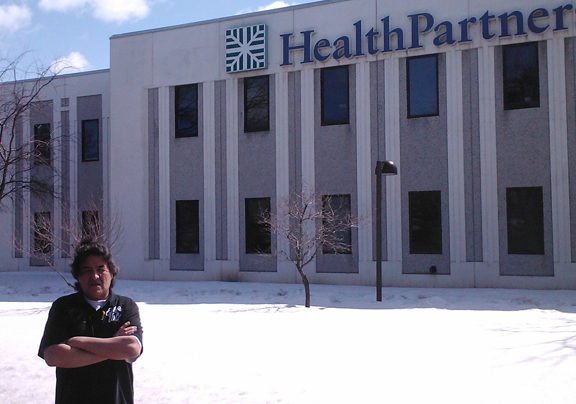 Roger Jeffers (Sisseton Sioux), a 50-year-old bladder cancer survivor, says that he was the victim of racial discrimination while seeking treatment for post-chemotherapy-related health complications at HealthPartners St. Paul Clinic this fall.

“Nobody was taking that I was there and I had bladder cancer. They treated me as if I came in off the street and I was some guy looking for pills,” said Jeffers of HealthPartners staff.

The issue began when Jeffers got neuropathy, a nerve-damage disorder which causes pain and numbness in hands and feet. He requested refills of his Percocet prescription to manage the neuropathy pain from his primary care physician, Dr. Shehbana Mahmood.

“She did give me some pain medication, but nothing ever happened with my feet, nothing changed, so I went back to see her. That’s when she started thinking that I was there for one reason [drugs] and that’s all,” said Jeffers.

At that point, Jeffers says that Dr. Mahmood verbally instructed him to take twice the amount of Percocet he was currently taking to manage his pain. However, this was not communicated to other HealthPartners staff or documented, so Jeffers was unable to refill his prescription, and encountered increased suspicion from pharmacists and nurses at the clinic. Jeffers alleges that Dr. Mahmood’s personal nurse told him that they could tell he was an addict and instructed him to find health care somewhere else, despite the fact that Jeffers has no history of alcohol or drug abuse.

Percocet since my surgery ten months before. It’s not like I was walking

in and saying, ‘Oh, here, I really want these Percocets.’ It’s a

medicine to me,” said Jeffers.

hardly unique. According to a review of national pain medicine studies

published by the American Academy of Pain Medicine in 2003, “despite

pain management, the literature continues to report the undertreatment

of pain, particularly among patients who are racial and ethnic

Although the studies did not include statistics

assessed for pain than non-minority patients.”

HealthPartners “encourage[s] any of our patients to contact the clinic

or our organization with concerns about care or service.”

On behalf of HealthPartners, Burt also recognized the importance of equity and anti-discrimination policies and practices.

is a leader in providing culturally competent care and service. We

recognize the importance of creating an inclusive environment,” said

Burt. “All complaints are investigated promptly by our Director of

Diversity and Inclusion and the clinic leader and dealt with

Since leaving HealthPartners, Jeffers has decided to

take legal action against the organization. Minnesota civil rights and

Jeffers and take on his case.

“In order to prove that you have a

discrimination case, you have to show that you were treated differently

from other people, and you also have to show that the reason for this

didn’t like you, but it’s because of one of these protected clauses,”

Once a case is established,

against. However, instances of direct evidence of discrimination are

“We don’t live in the sixties anymore, so people don’t

generally go around and use racial slurs and other discriminatory words

that you can take as direct evidence to prove that you have a case,”

Instead, attorneys look for circumstantial evidence

by comparing treatment of white clients in a certain establishment with

“If you’re a minority and you’re

being treated in a way that you feel is unfair or inappropriate, you can

prove discrimination by comparing yourself to non-minority workers in

the same place,” said Leyderman, using an employment setting as an

In lieu of direct evidence of discrimination, plaintiffs

can also prove they were discriminated against by highlighting the

absurd or inexplicable nature of their mistreatment.

only explanation for it could be discrimination,” said Leyderman.

resolution. Ultimately, there are several different outcomes a victim of

discrimination can request from the organizations they sue.

notice what happened to them and that it was wrong,” said Leyderman of

his clients. “Unfortunately, there aren’t a lot of ways to do that in

our society without asking someone to pay you, and that draws a lot of

attention internally and causes a lot of changes to happen.”

However, Leyderman also says that there are options outside of just monetary compensation.

that these things don’t happen in the future,” he said.

issues of health care discrimination to a broader audience.

health care. I’m not looking for anything, just for maybe another Native

guy to say, ‘Hey, they treat me like this, too.’ I’m a human being just

like you are. I didn’t get cancer so I could have pain medication,”