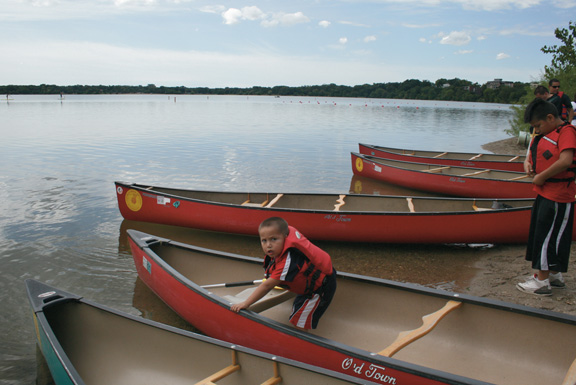 A canoe that was part of a Native community canoe-loaning program was stolen this summer. The canoe was owned by Jon Lurie, an English professor at Macalester College and the University of Minnesota. Lurie manages and maintains five canoes at Lake Calhoun as a resource for individuals and organizations in the Twin Cities Native American community.

"I see my role here as caretaker for a very valuable community resource that I maintain so that the entire community can have access to it," said Lurie.

The canoes were originally purchased by Clyde Bellecourt, a founding member of the American Indian Movement (AIM), through the Elaine M. Stately Peacemaker Center in the 1990s.

The Center used them for a Native youth canoe trip on the Mississippi River from the headwaters to the Twin Cities.

After this trip, they fell into disuse and were stored in a garage for years before Bellecourt loaned them to the now-defunct Healthy Nations program at the Minneapolis American Indian Center.  Lurie worked for Healthy Nations for five years before the state minority community health grant that funded the program was cut in 2010.

While Healthy Nations was an active program, staff took many urban Native American youth on canoeing excursions throughout the state and beyond.

"It was a unique model of adventure-based restoration," said Lurie. "When I say restoration, I mean restoring individuals’ spirits, restoring families, communities, and people’s connection with their histories and futures." 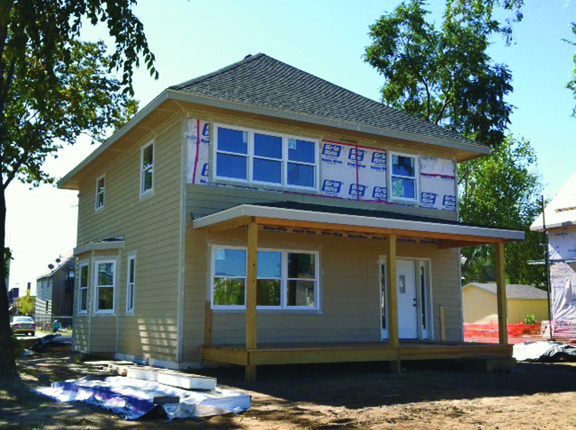 As he is not of Native American ancestry, Lurie credits much of his perspectives on the cultural importance of canoeing and Indigenous people’s connection to water to LaMoine LaPointe, the former director of Healthy Nations.

"When I met LaMoine, I did come in with a lot of my own ideas, because I’d done a lot of canoeing, but it was through his permission and inspiration that a lot of this occurred," said Lurie.

To date, a variety of both Native and non-Native groups in the Twin Cities have used the canoes Lurie maintains for their programming. Since May of 2008, Nawayee Center School in Minneapolis has hosted the annual Mde Maka Ska Canoe Nations Gathering on Lake Calhoun, which includes Dakota and Ojibwe language, culture, and healthy living activities and workshops.

Kwe.Strong, a Native women’s group, has used the canoes both to encourage healthy living in participants and in order to facilitate the annual Kwe.Strong Indigenous Women Triathlon that the group organizes.

The FATHER Project, an organization that works to "assist fathers in overcoming the barriers that prevent them from supporting their children economically and emotionally," also uses the canoes annually for programming with its members.

Dakota language camps from the University of Minnesota, various groups from Little Earth of United Tribes, and individual Native American spiritual leaders have also taken advantage of the opportunity to use the community canoes.

Lurie, who pays several thousand dollars a year out of his own pocket to maintain the canoes, asks that groups who can donate to help him keep the resource available. However, he does not turn anyone away for lack of funding and encourages everyone in the community to take advantage of the incredible cultural opportunity canoeing provides.

"The canoe is the gateway to reconnecting all these disparate pieces of culture that have been reawakening," said Lurie.

Lurie said that he is happy to assist groups and individuals however necessary, including providing them with paddles and life-jackets, teaching them how to paddle, and suggesting excursions.

"There is unlimited richness available to groups and individuals who want to come out," said Lurie. "I will accommodate any request to get them out on the water."

In addition to the five community canoes, Lurie’s personal canoe was also docked at Lake Calhoun. Lurie lent it out to members of the Native community as well, until it went missing in mid-July. The 17-foot canoe is cream-colored, with a Mad River plastic body. It also has woodwork on the seats and gunwales with black Velcro patches along the railings. Lurie is offering a $50 reward for any information regarding the canoe, no questions asked.

"It’s the only piece of property I’ve owned that’s really meant anything to me," said Lurie. "Whoever took it is depriving the whole community of a resource."

To share any information about the missing canoe or to learn more about borrowing the remaining community canoes, contact Lurie at 651-230-4161, or luri0005@umn.edu.