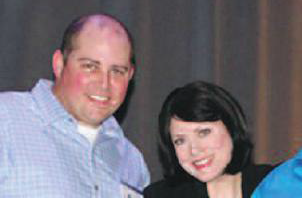 It would be hard to image anyone in the Twin Cities metropolitan area who hasn’t seen or used some of the 6,000 portable restroom units provided by Biffs Inc., of Shakopee, at construction sites, parks and special events. They are easily taken for granted unless you are somewhere where such a service is needed but is nowhere to be found.

Biffs Inc. is a 31-year-old, second-generation family business owned and operated by Derek and Heather Pauling, siblings who purchased the company two years ago from their parents, Mike and Diana Pauling.

Although they are practically neighbors with the Shakopee Mdewakanton Sioux Community, the Paulings are Ojibwe descendants of White Earth Nation. Derek serves as president (CEO) and chief financial officer, Heather is vice president and chief operating officer.

So how did this family with Native American heritage get started in the portable restroom service industry? That, says Derek Pauling, could be a lesson for young people in the Native communities and everywhere in Minnesota.

While people are born into families and communities, there are still personal behaviors and traits to be honed that will prepare you for whatever business or occupation where opportunities may exist, he said.

“It can be little things, like following through on commitments,” he said. “If you say you are going to meet someone someplace, be there and do it.

“I learn something new every day. Wake up in the morning and have a goal, be positive. It might be a small goal, but follow through on your commitment. All this starts when you are a kid. You might have small achievements when you start, but it builds and over time you will be surprised by your accomplishments.”

That transcends different industries and occupations, he added. It is especially important in industries that thrive on doing business with repeat customers. “It’s like a marriage,” he said. “Transparency, honesty, follow through on commitments are all important.”

That, he said, prepares you for whatever life deals you and when opportunities come along. His father and the Pauling family entrance into the portable restroom industry are cases in point.

Mike Pauling was in the Vietnam War where he was injured, and when he recovered someone was recruiting jobs for veterans. He went out to Satellite Industries in Plymouth thinking it had something to do with the space program.

That became a family joke. But the interview went well and the family patriarch went to work for Satellite, a portable toilet manufacturing and service company, for the next 10 years. Satellite now has global operations and is the world’s largest maker of portable restrooms.

The elder Pauling went off on his own in 1986 by finding partners to buy Biffs, a smaller portable restroom business with only 200 units and a couple of employees. He bought out the partners in 1997 when Derek graduated from the University of St. Thomas and came back to join the company.

Both Derek and Heather worked at Biffs while growing up and during summer months while going to college. Heather joined the firm as an employee in 1994 after graduating from the Minneapolis College of Arts and Design.

Along the way, Mike Pauling would also serve on the board of directors of the Minnesota American Indian Chamber of Commerce.

Both generations of the Pauling family insist people at construction sites or at special events need services that provide for their health, welfare and dignity with restrooms. Biffs is focusing on that objective with a variety of new portable units that fit different settings and events. The company website shows the different models of portables now avail-able.

Pumper, an industry trade magazine, has a complimentary profile on the company in its October 2015 edition that explains much about the industry and its products, logistics and technologies. That is available on the Biffs website under the News/Media column.

The company has grown with acquisitions over the years. The company now has 60 employees in the winter months and up to 85 in the summer when special events are more regularly scheduled.

That category is tilted towards the warm weather months, but not exclusively so. In late February, for instance, the University of Minnesota’s student Equestrian Team hosted a multi-state horse show for collegiate teams at Idylwood Equestrian Center in rural Stillwater. Biffs had two portable units parked outside the main horse barn and indoor arena where the show competition was held.

“You can certainly count me as one of their (Biffs) satisfied customers,” said Jaime Ashley Benner, owner and head trainer at the century-old horse farm. The portable units were especially helpful with visiting teams from Wisconsin, North Dakota and Nebraska joining the Minnesota equestrians.

Still, that was one of the smaller special events served by Biffs. The largest in company history occurred Sept. 30 – Oct. 2 this past year when the Ryder Cup Matches golf competition was held at Hazeltine National Golf Club at Chaska.

Biffs and the Paulings have posted a video, “Mission Impossible Sanitation,” on its web page recalling how 15 company drivers serviced 725 portable units, 133 sinks and five luxury toilet trailers at the golf club, pumping and hauling away 541,479 gallons of water and waste during those five days.

A potentially even larger event may be coming in 2018 when Minnesota hosts the Super Bowl. Pauling said contacts aren’t signed at this point, but all portable restroom providers will get action. If not directly tied with the game and NFL activities, providers of portables will service corporate receptions and related events.

To learn more about Biffs, see their website at: www.biffsinc.com.