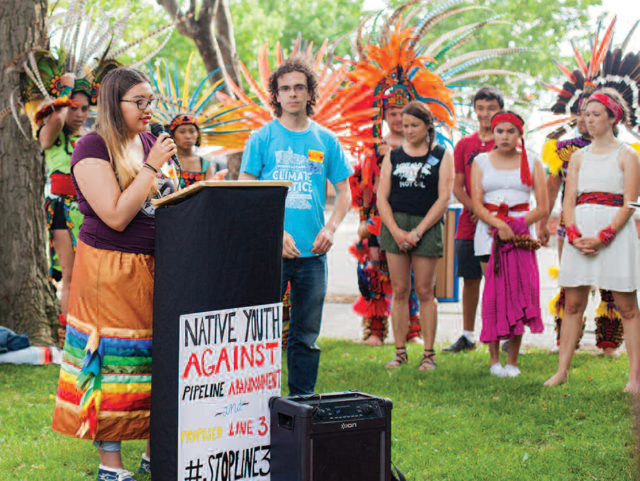 “We applaud the courts for protecting our laws and regulations from undue political influence, and will ask the Court to shut down pipeline operations immediately.” – Standing Rock Sioux Chairman Dave Archambault II

For the past two weeks, Minnesotans and tribal members have packed Department of Commerce meetings on the Draft Environmental Impact Statement (DEIS) on Enbridge Line 3. Thousands of people have come to ask questions of the state, in what is a very, very short timetable for a major project.

The DEIS is 5000 pages in length, but under heavy fire as inadequate. Four tribal governments have intervened in the process: Red Lake Nation intervened in mid June, Fond du Lac, White Earth and Mille Lacs all have filed as intervenors.

Some huge questions loom. Enbridge, for instance, has stated that it will take over $l.2 billion to remove the aging Line 3 with all the “leaks and anomalies.” But they have not stated who will pay for this or how much more it might cost if we were to clean up the “legacy contamination” under the line.

At all meetings, people (Native and non-Native) have asked why the Ojibwe communities should be sacrificed for a Canadian tar sands pipeline, when the tar sands industry is on its last breath.

The final DEIS is scheduled to be out in the fall and the pipeline’s certificate of need (what they need to begin construction) could be issued by the Minnesota Public Utilities Commission as early as April of next year. At a St. Paul press conference in June, Minnesota State Representatives Mary Konesh Podien – flanked by others, including Frank Hornstein, John Marty and Karen Clark – challenged the adequacy of the state’s draft environmental impact statement and asked for a new Environmental Impact Statement (EIS) on pipeline abandonment, prior to any new pipeline approvals.

The EIS is on a very fast track to keep with Enbridge’s convenience, and a Pawlenty imposed deadline. In comparison, the state of New York took seven years to review proposals for fracking, before the moratorium was issued. A federal ban on lead shot took decades for review.

“Complex decisions take time,” Honor the Earth Attorney Frank Bibeau said, “particularly when there are thousands of comments as to the inadequacy of the EIS, and huge regional and global implications. The interests of Minnesota citizens require due diligence in review by policy makers.”

In the meantime, two major legal cases, may impact significantly on the state’s liability and Minnesota’s future.

In mid June, Michigan’s Attorney General filed new charges of involuntary manslaughter against five officials in the Flint Water Crisis investigation, among them the head of Michigan’s Health Department.

Michigan indictments on state negligence have resulted in 13 charges for state officials who “did not act to protect the interests of Flint citizens.” The city of Flint, Michigan came to international attention when their drinking water system collapsed. “The Flint Water Crisis was and is a failure of leadership”, a report issued by Michigan Attorney General Bull Schuette notes. “… A cause of the breakdown in state management was a fixation, a preoccupation with data, finance and costs instead of placing the health, safety and welfare of citizens first.”

“Michigan’s example may be a fore-warning to Minnesota public officials. In particular, drinking water issues are already a concern in many northern tribal communities, and new threats will likely exacerbate those conditions,” Bibeau said.

According to attorneys at Earth Justice, “The Court did not determine whether pipeline operations should be shut off and has requested additional briefing on the subject and a status conference on June 21…”

The Standing Rock Tribe responded. “We applaud the courts for protecting our laws and regulations from undue political influence,” said Standing Rock Sioux Chairman Dave Archambault II, “and will ask the Court to shut down pipeline operations immediately.”

The legal case involves similar issues to that of the proposed Line 3, particularly with regards to the environmental injustice of setting a pipeline near tribal people instead of near a white community, as was originally planned. DAPL was rerouted to be directly north of the Standing Rock reservation so as not to impact the city of Bismarck.

The Minnesota Department of Commerce notes that the tribal community bears the largest impact of this proposed project:, despite route alternatives. At Evidentiary Hearings, Enbridge leadership testified that the route through tribal lands was the least risk to the broader society. Not that different than DAPL. The DEIS also notes, “…A finding of ‘disproportionate and adverse impacts’ does not preclude selection of any given alternative.”

As Earth Justice explains, “The Obama administration made a carefully considered decision that these Treaty Rights needed to be respected in connection with an oil pipeline immediately upstream of the reservation. The Trump administration ignored that advice, and acted as if the Tribe does not exist.”

In short, the Michigan indictments of State and County officials, and the Standing Rock federal court decision could have serious implications for Enbridge’s future in the region. As tribal governments line up on the side of their people, state and northern county officials might be cautious about those oaths of office. It seems that Michigan’s Attorney General found out the hard way that oaths were to serve the public. Northern counties and state may want to review their oaths of office in the face of massive pressure by a Canadian pipeline company.