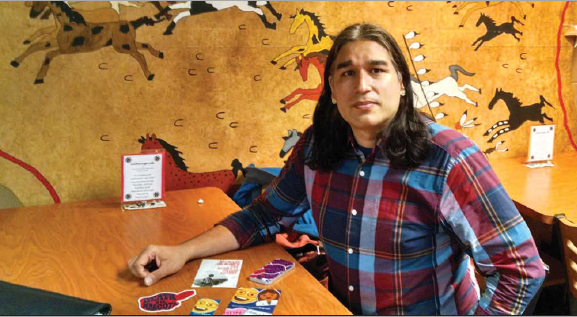 David Bernie, a Minneapolis-based Ihanktowan (Yankton Sioux) artist who combines graphic design with modern technology, is working to bring his “Indigemojis” art applications to formats usable by most mobile devices and online technology.

The Tiwahe Foundation in the Twin Cities has given Bernie a grant to expand his Native American and First Nations-themed emoji designs to Android applications for use by Google’s mobile devices.

Bernie launched the first release of his Indigemojis designs in October 2016 through Apple Inc.’s iOS platform that is exclusive to Apple’s iPhone, iPad and iTouch mobile devices. This next step will help Bernie reach users of the larger Android smartphone and related tablet market developed by Google. It is a larger mobile device service used by a wide variety of mobile technology manufacturers.

Despite the rapid spread of “smiley faces” by the London-based Smiley Company and international graphic art developments by Japanese designers, who gave us the word “emoji,” no one besides Bernie has designed “emoticon” characters, stickers and posters exclusively for Indian Country.

The diversity of Native and First Nations peoples probably explains part of the reason, Bernie said in an interview.

But other factors obviously come into play, including popular perceptions that Native people are stoic and unemotional like many of their Northern European immigrant neighbors in the Upper Midwest and Northern Plains states and Western Provinces.

This simply isn’t true, Bernie said. “There is intense emotions within our cultures,” he said, reflected in support for community, for elders, for justice, the environment, and found within literature and music.

Deanna StandingCloud, the program and community network director at Tiwahe Foundation and the point person for its American Indian Family Empowerment Program (AIFEP) grants, said this oversight in recognizing Native emotional contacts caught her funding group’s attention. She now has some of Bernie’s graphic “stickers” on her own mobile and Internet devices.

The Indigemojis application, or app as it is called in the modern communications technology, has 14 categories of images that portray cultural, political and socially important imagery and language for Native people. They include a category called “Smoke Signals” that feature popular sayings and slang across indigenous communities, and culturally and community bonding categories such as “Pow Wow,” “Village” and “Food.”

Popular and commonly used emoticons are depicted by “Frybread Francis,” “Bobbie Bear,” and “Commod Can” characters, and an “Activist” category connects U.S. and Canadian movements and issues common among the Native communities. Among them are “Women Warriors” that celebrate women with professions and feminist expressions, and “Indian Love” categories that express relations among friends and partners.

Bernie and his Indigemojis are part of the broader artistic community’s efforts to reconnect people emotionally even if they are only interacting with others through mobile devices and otherwise impersonal technology.

The emerging problems of people failing to connect in modern society came to international awareness in 2000 when sociological writer Robert Putnam wrote “Bowling Along: The Collapse and Revival of American Community,” a best-selling book that described how people were reducing in-person social contact with others. This, he reasoned, was a threat to community and indeed to democracy.

Bernie, 42 and an experienced artist in photography, jewelry and graphic arts, said research by graphic arts and technology industry researchers show emoji and emoticon characters and stickers express emotions among users who may be distant and not able to enjoy direct personal contacts. More than 172 million Americans are known to have smartphones of some type, and better than three-quarters of users claim emojis express feelings better than their words.

This is a huge market, at home and worldwide, and can be extended to the North American Native and First Nations communities.

Billions of such stickers are now used globally each year by Android and Apply technology users, he said.

And, Bernie added, there are millions more people who are members or connected to the 566 federally recognized tribes in the United States and the 634 sovereign First Nations communities in Canada.

Further down the road, he said, there are still the millions of “Native” people in Mexico, Central American and South America who share similar cultural experiences and linkages.

Bernie was one of 11 Natives who were awarded Tiwahe Foundation’s American Indian Family Empowerment Program Funds (AIFEP) from its January processing period.

The grants are made in partnership with the Two Feathers Fund of The Saint Paul Foundation. AIFEP strives to reverse the social, educational and economic challenges facing American Indians by investing in human capital, skills and cultural strengths through three priority areas: cultural connections, educational achievement and economic self-sufficiency.

Depending on the type of technology you use, you may learn more about Indigemojis by contacting the Apple Store website or Apple’s local stores, by visiting Bernie’s website at http://www.indigemojis.com/, or by learning more about pending developments with Android equipment by visiting http://www.david-bernie.com/press-release-david-bernie-launches-indi-gemojis.