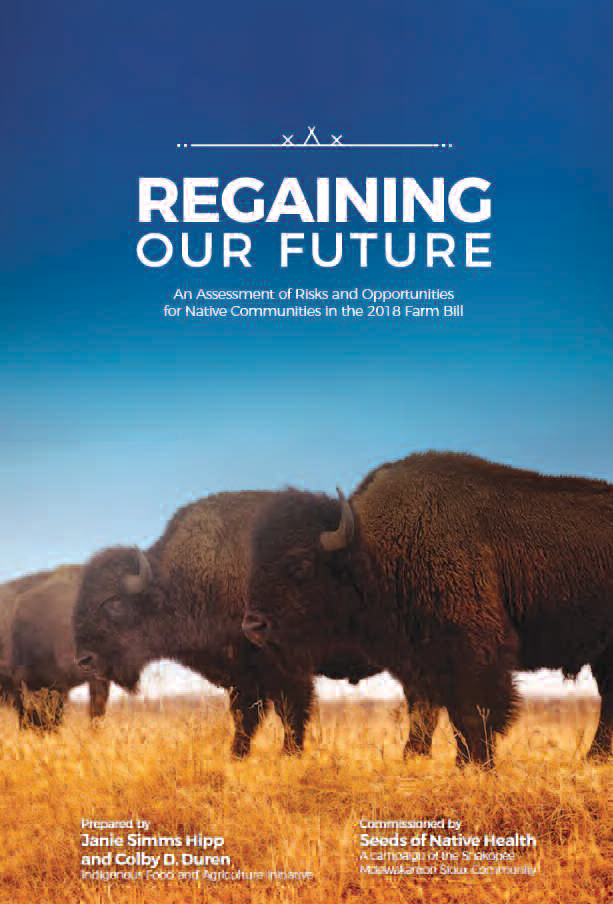 The Shakopee Mdewakanton Sioux Community (SMSC) is reminding Indian Country that it needs to work with Congress and naturally allied groups to support programs that cover the entire food chain, from producers to consumers, who are all bunched together under what is called “the farm bill.”

Two researchers with the Indigenous Food and Agriculture Initiative (IFAI) at the University of Arkansas School of Law have pulled together all that is at stake for Native people and tribes in a new study, Regaining our Future: An Assessment of Risks and Opportunities for Native Communities in the 2018 Farm Bill.

The SMSC funded study shows how 70 percent of the U.S. Department of Agriculture budget most years is used for various feeding, nutrition and food safety programs that affect all Americans and all Native people regardless where they live. The rest of the USDA budget is spread out over conservation, water quality, trade promotion, economic development, insurance and farm income stabilization programs that give the bill its name.

The study was prepared and written by the Initiative’s Janie Simms Hipp (Chickasaw Nation), a former senior advisor for tribal relations to former Agriculture Secretary Tom Vilsack, and Colby D. Duren, the IFAI’s policy director and former staff counsel for the National Congress of American Indians.

Their findings will come as a surprise to many people on the knife, fork and spoon end of the food chain. It happens about every five years when Congress rewrites and updates food, farm, nutrition and related natural resource legislation lumped together under the so-called farm bill.

While access to food and good nutrition is important to all Americans, the Hipp and Duren study stresses that Natives are involved in every step of the food chain from farming and ranching on down, and Natives and tribes are also engaged participants in soil, water and resource protection.

Charles R. Vig, chairman of the Shakopee Mdewakanton Sioux Community, emphasized those linkages in announcing publication of the new study.

“Today a food and nutritional health crisis grips most of Indian Country,” Vig said. “As Congress prepares to shape the next farm bill, there has never been a more critical time for Native Americans to unite to defend our interests.

“Tribal governments, Native producers, environmental stewards and Native community members must work together to involve Congress in helping us solve this crisis,” he added.

Hipp said in an interview that complexities for Native Americans with food and agriculture policies come partly from their own diversity. “Seventy percent of our people now live in urban centers,” she said. “But our land base is rural.”

Meanwhile, she said, this often disconnects Native food producers from urban consumers. “We have always been food producers. Our people need to feed themselves; we need to build out our food system.”

That is a SMSC objective and why it supports urban farming projects, including in the Shakopee and Prior Lake area. That prompted SMSC officials to reach out to Hipp and colleagues at the special Arkansas center more than two years ago.

Hipp said that looking at farm bill legislation title by title, “a lot of people can read the report and see themselves connected to the farm bill. It is ‘the people’s bill’,” she said.

One of the smaller titles in the bill, for promoting American food exports, actually has special importance for Minnesota tribes and Natives entrepreneurs, given the number of special Native foods companies based here. The study calls for including Native foods and companies at all U.S.-led trade promotion tours and conferences.

Much is at stake for the Native Americans and nearly all other Americans whose lives are touched in some way by the farm bill. Pressures are building in Congress to separate the bill between programs for producers and the food, nutrition and safety portions. That would break the coalition that has kept “the people’s bill” as part of public policy for nearly 150 years.

SMSC and Arkansas’ IFAI have allies for getting the report out to tribal leaders and all who are engaged with Native food and health activities. The study’s announcement statement noted Hipp and Duren consulted closely with Intertribal Agriculture Council, Intertribal Timber Council and National Congress of American Indians in preparing the report.

As for SMSC, supporting pure, or basic research, across the breadth of Indian Country is not new. The Indigenous Food and Agriculture Initiative research project is a continuation of a commitment made in 2015 by the Shakopee Mdewakanton community.

SMSC, the largest Native American philanthropic contributor, launched a $10 million campaign two years ago called Seeds of Native Health to improve Native nutrition and food access through grants. As part of that, it funds research education and “capacity-building efforts,” the tribe explained.

The Regaining Our Future study is available online at SMSC’s Seeds of Native Health site, at http://seedsofnativehealth.org/regaining-our-future-report.