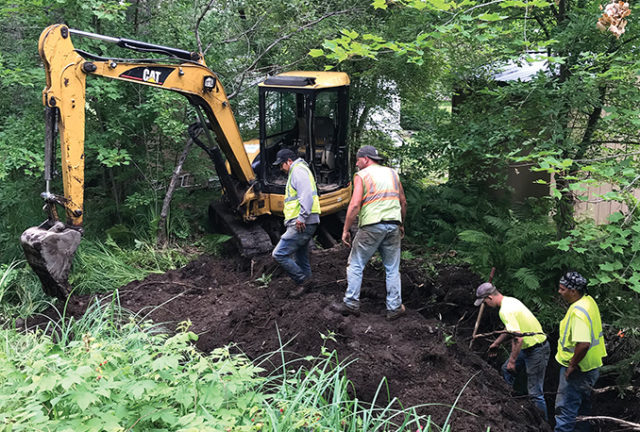 The Fond du Lac Band of Lake Superior Chippewa is busily laying cable throughout its northeastern Minnesota reservation and is now seeking Federal Communications Commission approval to qualify as a licensed carrier for accessing federal subsidies to low-income and underserved communities.

The band has created a new corporation, called Aaniin (a greeting or “Hello” in Ojibwe), that is connecting homes and businesses to the new system. It will offer high-speed fiber-optic services within its 120-square-mile service area.

Jason Hollinday, Fond du Lac’s planning director, said road-to-home connections are now being made in some areas and should be completed by spring. The connections enable telephone, Internet and TV and video services.

Door hangers are being left on door knobs in areas where crews are now working. That has information on where to call Aaniin to set up home surveys and arrange no-cost installation.

The system’s startup involves telephone and Internet connections. Aaniin is in negotiations to add cable television service early next year.

The band’s petition to the FCC, meanwhile, seeks to have Aaniin recognized as an Eligible Telecommunications Carrier (ETC). That designation means Aaniin’s customers would qualify for the FCC’s Lifeline program that subsidizes voice and broadband services to low-income and underserved communities in U.S. states, territories and on tribal lands.
Hollinday said the band is hopeful for a FCC declaration yet this fall and by spring at the latest. It would mean eligible customers would get broadband – or high-speed Internet service – and voice telephone service for $9.25 a month.

“With 32 percent of the reservation’s population living under the poverty line and a limited few with internet service, the federal subsidy will promote a new standard of well-being in the community through health, business and employment resources previously unattainable,” Hollinday said.

It would be difficult to start a modern, “from home business without high speed Internet connections in today’s age,” Hollinday added. And it is also crucial to have these services for school children and anyone wanting to do additional schooling from home.
The system will connect an estimated 1,800 homes in the Fond du Lac area, about 25 existing businesses and several institutional facilities.

Going forward, however, the system is essential for anyone who may start a business and must have high-speed connections to upload and download contracts or information. And that, said Hollinday, includes nearly everyone who would start a business from home.
This remains a challenge in many rural parts of Minnesota and throughout the country, said Allison Ahcan, communications director for the Blandin Foundation at Grand Rapids that helps communities and planners with broadband connection programs.

Citing information from the Minnesota Office of Broadband’s 2017 annual report, she said 70.64 percent of Minnesota households and businesses have Internet speed goals that meet or exceed state goals set for 2026. But in non-metro, or rural areas of the state, that achievement drops to only 52.88 percent.