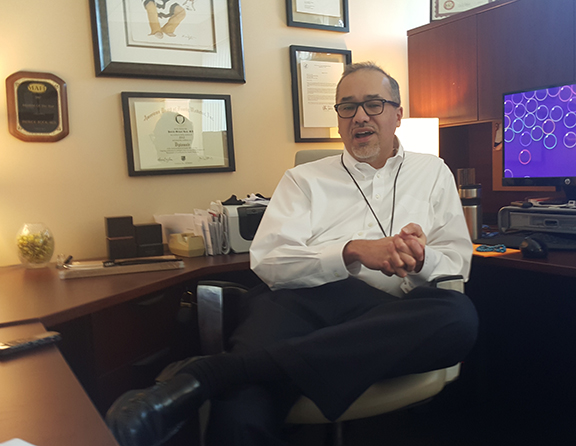 Rock, an 18-year IHB employee and member of the Leech Lake Band of Ojibwe, says clinics like IHB must seek alternative funding sources as they strive to provide quality care to a population facing steep health challenges.

Rock and his staff saw opportunity with the passage in 2010 of the Affordable Care Act, commonly known as Obamacare. The law provided funding for just the kind of patient-centered innovation IHB had on its wish list for over a decade. With nearly $1 million in capital provided under the ACA, the clinic has been revamped to reflect a care model known as Accountable Care Organiza-tion (ACO).

Dr. Rock says the model is designed to improve patient outcomes and satisfaction, while reducing costs by using preventative medicine to keep patients out of emergency rooms.

The Circle’s Jon Lurie spoke with Dr. Rock about the changes, and the challenges of caring for Minneapolis’ urban Indian population.

JL: What were some of the considerations you pondered when redesigning the clinic?

JL: Does this model work particularly well with a Native American patient population?

Dr. Rock: One of the things we take a lot of pride in is we try to adapt a lot of cultural practices into our daily work here. Right now we’re on a journey where we’re looking organization wide at indigenization and decolonization as objectives for our daily work. We think the care we provide is very Native-centric, meaning that we’re seeing people as a whole versus as a disease or a set of symptoms.

JL: What are some practices you’ve implemented that contribute to indigenization and decolonization at IHB?

Dr. Rock: As a community we have practices that have been around for a very long time. For example, we offer and encourage our patients to use the Sacred Pipe as part of their healing process, part of their own self-care, if they so choose. In our counseling support area, we have a space set up where people can smudge. There’s a bowl there, with some tobacco and some sage, where people can pray and engage in that ancient healing practice if they wish.

Dr. Rock: Over the past year we came together as a staff and decided we wanted more indigenization in the way we conducted patient care. If you are not Native, and many people on our staff are not, we do not impose traditional practices on you. We encourage people to ask questions, to learn, and participate if they feel comfortable. But it’s not a requirement to work in our organization. We have people from all walks of life in our community.

JL: What are some of the challenges you’re dealing with as a small clinic serving a large community?

Dr. Rock: The federal government has a trust responsibility to provide health services to all Native people. But the funding provided to the Indian Health Service by the federal government is inadequate. We have to find other mechanisms to keep this clinic afloat. If you look at our budget it looks like a patchwork quilt. We rely on a variety of funding sources. Today, seventy-percent of Native people live in urban centers, and the rest live in rural areas or on reservations. But the urban centers, where seventy percent of Native people live, only receive about one percent of the Indian Health Service budget. So there’s an extreme imbalance that has never been addressed, nor do I think it will be anytime soon.

JL: Do you ever read the treaties and compare the language in those nation-to-nation agreements with the reality of Indian health care on the ground?

Dr. Rock: I take the treaties very seriously. They are a promise. They describe a pre-paid health plan for Indian people, and we should start thinking about them in that way. Those are historical documents and like a lot of history they can be easily forgotten. We have to remind the federal government all the time that the treaties were made for the purpose of taking care of indigenous people. Health care is an important part of that. The Federal government attempts to fulfill its treaty obligations, but they are often not implemented fully from an administrative or budgetary standpoint. Native people’s healthcare should be equal to everyone else’s, not less.

JL: As you look back at your 18-year career at IHB, what are some successes you can point to?

Dr. Rock: Our work in diabetes has been very strong. We’ve done really well with prevention and also with the diagnosing and treatment of diabetes. We received national recognition from the American Diabetes Association. We’ve done a lot of good work on children’s immunization programming. We also recently received a state health commissioner’s award for the work our nurse midwives are doing around opiate use and pregnancy.

JL: As you look at the future of this community, what public health dangers to do you see that need to be addressed?

Dr. Rock: Unfortunately, there’s no paucity of concerning trends out there. But one of the things that hit us like a tidal wave a few years ago was a recognition that opiate abuse had reached epidemic levels among the population we serve. We would see a little bit of it before that, but it wasn’t overwhelming. One thing that particularly brought this into focus was the level of opiate misuse among some of the pregnant women we see here, and having babies affected by this challenge. People in our community are using heroin, opioid prescription medications, and methadone.  For many years we’ve been building our organization to deal with the problems of Fetal Alcohol Syndrome and Fetal Alcohol Effect. But now we talk a lot about Neo-Natal Abstinence Syndrome, a term that’s starting to become commonplace at our clinic. Neonatal Abstinence Syndrome occurs because a pregnant woman takes opiates or narcotics. These pass through the placenta and the baby becomes addicted along with the mother. At birth, the baby is still dependent on the drug. Now we talk to everyone we see about opioid abuse. We want to look at this problem as holistically as we can. There’s a lot there that still needs to happen, but we’ve taken our first steps into that area.

To learn more about the Minneapolis Indian Health Board, see: http://indianhealthboard.com