Growth is within sight for the Indigenous Peoples Task Force (IPTF) – a vital provider of culturally appropriate health services, programs, and housing in Minneapolis.

Under the leadership of Executive Director and founder Sharon Day (Ojibwe), IPTF remains devoted to transforming the lives of people living with HIV. From its inception, the organization has offered access to necessary culturally-based medical services and holistic support to Native communities.

Few leader have stayed committed to the work of serving people living with HIV as long as Day has. Over two decades since starting IPTF, Day holds mighty visions for the future.
With plans well underway, IPTF will erect an urban sanctuary called The Mikwanedun Audisookon Center for Art and Wellness in the Phillips neighborhood. The Center will provide IPTF with one roof to integrate the health, education, art, housing, and traditional healing services they already extend to Native youth and adults, while increasing their impact. 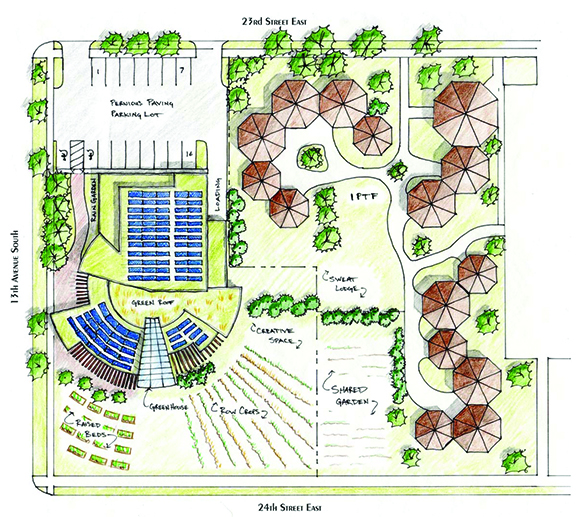 I spent time with Sharon Day listening to the project’s recent developments at IPTF’s current center on 23rd Street in Midtown Phillips. The warmth of natural light streamed through the efficiency at all angles when I walked in, courtesy the eight walls and windows that make up the building. Its unique structure makes it an unforgettable beacon of healing in the neighborhood.

Sitting together on the upper floor of the efficiency, blueprints, books, and pamphlets populated the circular table – signs of big ideas brewing. As the sun slanted in to envelop Day’s face, she leaned in towards me and began to share her vision.

“The first program that I started when I came to work at the Task Force in 1990 was the youth ensemble theater program,” Day began. Day is referring to the Ikidowin Peer Educators and Acting Ensemble, or as she termed it, IPTF’s “anchor, flagship program.” The youth ensemble performs plays about public health topics such as sexual health, HIV/AIDS, or teen pregnancy. Native youth become both actors and peer educators.
“When I first started this job [at IPTF] in 1990, it was an AIDS organization and a lot of the people were dying,” Day said. In the midst of the theater’s beginning “you had people over here, no matter how old, who were nearing the end of their life. But then I had this group of youth [in the ensemble] who were just beginning their life,” Day continued.

The use of art and healing guided by cultural teachings grounds many of IPTF’s teachings and offerings, including the Ikidowin program.

Standing strong at 28 years, the youth theater ensemble is one of the longest running theater programs in the country. Despite the program’s robust history, Day reminded me that “our kids have never had their own space to perform in.” With a space all their own, the acting ensemble could plan an entire season of plays. Day believes it’s time to give youth the space they deserve.

With the youth in mind, The Mikwanedun Audisookon Center will include an “intimate theater space to expand the successful Ikidowin program.” The in-house theater will boast 75 seats and would expand both programming and year-round job opportunities.
In the meantime, space or no space, the ensemble stays busy. The actors and peer educators travel around the state to youth programs and reservations to perform their groundbreaking sets.

“Even though we are working with Indian youth who are mostly in middle school and junior high, we try to tackle issues happening in the community,” Day explained. “We will never do a play just to do a play.”

In response to the prevalence of sexual violence and abuse, the plays focus on public health solutions through a social justice lens. “Our youth are really stretched because this is the community they live in and these are things that they have to deal with everyday,” Day stated. Each of the plays therefore brings in relevant health messages and preventative tools ­– whether around the regular realities of cyber-stalking to sexual violence and abuse encountered by Native youth.

Currently, they are developing another production called Touch For The 21st Century. It’s an extension and response to the groundbreaking 1980s film production, Touch, which initially premiered at Illusion Theater. Bonnie Morris, Illusion Theater’s producing director, approached Day to see if she was interested in creating an Indian version of Touch.
This version of Touch, in partnership with Illusion Theater, has been devised with the guidance of Native grandmothers from the elders’ lodge alongside Native youth. The seed for this new production, moreover, emerged from ideas generated at a multigenerational retreat; elders and youth were prompted to share their stories with one another. The stories gathered there were then woven into the new Touch piece.

“It begins with who we are,” Day said. “We incorporate who we are as Indigenous people. We come from a people who have a ceremony for everything. We come into the world as gifts and this is how we are to be in the world.”
The Center will both expand and further cultivate these Native youth-led educational and artistic opportunities, right in the Phillips Neighborhood. But the theater is just one of the Center’s many offerings.

Settling into her chair, a smile spread across Day’s face and a small laugh escaped her lips. “When you are the Executive Director of a small organization,” she remarked, “you work and you fill in. You do everything.”

And IPTF’s mission can seem exponential. The organization also cares for a medicine garden. They grow sweetgrass, tobacco, and sage. Cedar trees encircle the property too. These four basic medicines are just one part of the ecosystem that Day and her team nurture and hope to expand at the new Mikwanedun Audisookon Center with their neighbor, Waite House.

After these four medicines were planted, vegetables were introduced to the garden too, many culled from heirloom seeds. Day admitted to me, “You know you can’t just grow one thing, right?”

Replete with bountiful harvests each year, Day’s daughter suggested that they begin giving these vegetables to young mothers and their babies in the community. What may seem like a small idea actually launched IndigiBaby – a new line of baby food designed for Native mothers and their children.

“What if we return to our original Native diet? What if we feed our babies a traditional diet?” These are just two questions that Day said guide the new venture.

Recently, Day and her team cooked up the first batches of baby food using the heirloom squash grown on their farm. Wild rice will be sourced from Days’ reservation in Bois Forte as they introduce other varieties of baby food.

Despite this progress, in order to take their next steps, Day’s team needs a commercial kitchen. That’s where the new Center will come in. Along with a commercial kitchen, it will also house a cafe serving breakfasts and lunches brimming with Native American foods. The kitchen will serve as a training site for residents living at IPTF, but also people with disabilities or neurodivergent people too.

Until then, IPTF’s gardens will continue supplying fresh foods along with educational opportunities. The knowledge garnered on maternal healthcare and breastfeeding has been added to the Gitigaan-manage-gidiwin (The Teaching Garden) curriculum at IPTF.
Most importantly, IPTF staff continue to test taste the new baby food.

A respect and acknowledgment of the land and environment underpins the entire plan for the Mikwanedun Audisookon Center. The center will be built with Indigenous-based resources and will sport a high efficiency system to lessen the environmental impact.

The impressive structure will host green technology, including passive solar. Compressed earth blocks will be utilized to support the structure. With the use of green building technologies comes job opportunities and a “learning laboratory” for vocational trainings in renewable energy and environmentally responsible construction – fields often unjustly inaccessible to Indigenous people and people of color of Minnesota.

An an artist herself, Day also shared enthusiasm for the development of a state of the art studio and workshop for traditional arts and crafts. “It will be a place to teach some of those traditional arts that are dying,” Day extolled.

As the sun shifted up in the sky towards noon, Day summed up the building project with humility. “These are a couple of initiatives that we would add to really enhance and allow our programming [at IPTF] to grow.”

As the building project continues to develop and Day raises the necessary funds for the $2.5 million capital investment in Phillips, IPTF is staying busier than ever.

“We continue to focus on HIV [services] – it’s still about a third of our programming,” Day remarked. “We still provide case management services to people living with HIV, counseling and free [HIV Rapid] testing.”

In one year, IPTF supplied 1,548 people with HIV and Hepatitis C prevention education and 942 individuals were tested for HIV or Hepatitis C.

Gabawenima Case Management counseling and support services were provided to 25 individuals living with HIV/AIDS as well as their families. And Maynidoowahdak Odena Housing keeps 49 individuals with safe and affordable housing.

To its leader, expanding this work at IPTF with a new art and wellness center is a dream come true. After a contemplative pause, Day said, “I guess, as an artist myself, the whole community is the canvas. I have been so fortunate to have the opportunity and a board of directors who said, ‘yes, let’s do that Sharon, let’s make this building that will be an art and community center.’”