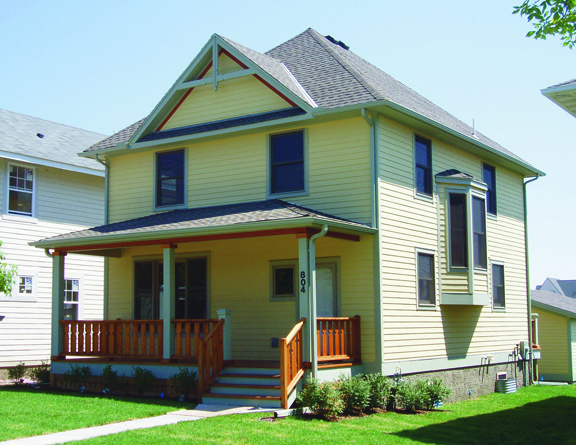 After years of dreaming, planning and collaborating with partners throughout the city and state, Little Earth of United Tribes (Little Earth) has launched its Homeownership Initiative (LEUTHI) this fall.

The initiative, which will support Native American families through the process of home ownership and offer them quality, affordable housing options, marks an unprecedented opportunity for Minneapolis’s Native American community. It will also help

provide safety and stability on a block in the Phillips neighborhood that has had a history of drug and gang activity.

Bill Ziegler (Lower Brule Sioux), President and CEO of Little Earth, said that the concept behind LEUTHI had been talked about at Little Earth internally since as early as the 1970s and 1980s.

In 2006, Little Earth staff polled its residents to discover why people were remaining in the rental community, even when their financial statuses would have enabled them to relocate.

"The intention was for it to be transitional housing," said Wahbon Spears (Mille Lacs Band of Ojibwe and Potawatomi), Single Family Development Coordinator at Little Earth. "But people want to stay because of this strong sense of community, belonging, and wanting to be together."

That same year, Ziegler met with Minneapolis Mayor RT Rybak and City Councilman Gary Schiff to discuss making the transition from renting to owning a reality for those belonging to the Little Earth community. Together, they identified the E.M. Stately blocks, located directly East of Little Earth, as an ideal location for LEUTHI homes.

"We had to get around this concept that I think is inherent in Native people, which is individual ownership," said Ziegler. "We have to help our families come to terms with the belief that we can be homeowners and we’re not just being selfish or individualistic."

As part of a more communal approach to home ownership, Little Earth partnered with The City of Lakes Community Land Trust (CLCLT) to hold the lots in Little Earth’s name, while the individual homeowners retain the equity of the houses themselves. Because of this, Little Earth will have the right of first refusal on any LEUTHI home that is sold so they can, in turn, mortgage it to another Native American family at a low rate.

"The land-trust model is absolutely the answer because it allows our families to come to that place where they’re building equity and have the stability of home ownership, but they’re not forsaking their community in the process," said Ziegler.

In addition to CLCLT, Little Earth has partnered with the City of Minneapolis to secure a federal Neighborhood Stabilization Program grant, received development assistance from the Greater Metropolitan Housing Corporation and The Minnesota Housing Partnership, and received donations from the Shakopee Mdewakanton Sioux Community, Family Housing Fund, and Northwest Area Foundation.

Although it costs between $225,000 and $250,000 to acquire and raise or renovate each home, Little Earth is able to mortgage the houses through subsidies from its partners to families for only $750 per month, with a total mortgage of around $100,000.

In addition to the low cost and proximity of the homes to the Little Earth rental community, homeowners working through LEUTHI will retain access to the social and community services offered at Little Earth, such as youth and elders programming, resident advocacy, maintenance assistance, and day labor jobs.

"We’re really keeping them included in this community and tied in," said Bad Heart Bull. "They want to stay here because it’s their community, their sense of home, and the more we can grow the community and keep them here, the better."

Currently, Little Earth is rebuilding and rehabbing five homes on E.M. Stately Street. Each is a single-family home of between 1,700 and 1,800 square feet, with three bedrooms, two-and-a-half bathrooms, and a two-car, detached garage.

"We didn’t cut any costs – we’re going for all the upgrades," said Spears. "These houses are going to be built to last."

The upgrades are environmentally friendly, with energy efficient appliances and materials that will also serve to keep homeowners’ energy costs low.

To qualify for LEUTHI, a household must show proof of American Indian Tribal membership, make less than 80% of the area median income, and have a steady source of income. Little Earth and partners Woodlands National Bank, CLCLT, and the American Indian Development Corporation will work to counsel families through any potential credit barriers. The application is short, requiring households to submit the first two pages of last year’s tax returns and the head of household’s three most recent pay stubs. From there, a family member must attend an eight-hour Home Stretch Workshop offered through the state, which prepares first-time homeowners for the process of mortgaging and maintaining a house.

Little Earth plans to begin Phase II of LEUTHI next summer, when they will seek to purchase an additional five homes on E.M. Stately Street, enter them into the land trust program, and renovate or rebuild them.

Little Earth staff highlights the significance of the initiative, both to current residents of the Little Earth rental community and Minneapolis’s Native community as a whole.

"For us to be able to take this community, a Section 8 community, where many families are second, third generation renters of subsidized housing and make those families homeowners, that’s nothing short of amazing," said Ziegler.

Bad Heart Bull echoes this sentiment, seeing LEUTHI as a move toward the inclusion of Native people in the dominant society.

"Owning a home is the American dream, and for so long our people haven’t had that chance to even dream," he said. "White people can have homes – why can’t Indian people? Now we can, now we will. Being included in those broader discussions creates more opportunities."

Little Earth is currently accepting applications to LEUTHI from potential Native American homeowners. For an application form and more information, contact Spears by email at Wahbon.Spears@learth.org or by phone at 612-455-2808.