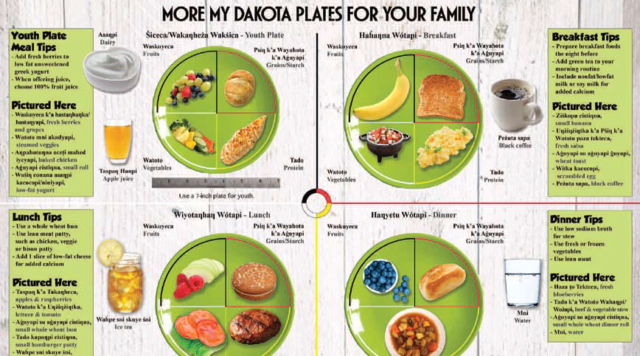 When registered dietician Stacy Hammer asks people how they feel, she hears plenty of simple answers that make sense at face value but may be hiding greater underlying problems. Diabetes and heart disease are just two examples.

Hammer is the dietitian and diabetes coordinator for the Lower Sioux Indian Community near Morton. Her nutrition and health preventative care work has expanded beyond diabetes, however, and is attracting attention from other tribal groups, Indian health organizations, and broad-based human health insurance and nonprofit organizations.

Blue Cross and Blue Shield of Minnesota saluted her and the Lower Sioux’s (LSIC) work this past year with its Minnesota Trailblazer program that promotes what different communities are doing to improve lifestyles, nutrition and other preventative health measures. LSIC became the first of Minnesota’s 11 tribal communities to be recognized during the Blues’ summer Trailblazer Tour.

Scott Keefer, vice president of public affairs and communications for Blue Cross Blue Shield, said 21 organizations throughout the state have been recognized since the program was started in 2016. The honors go for programs that build stronger, healthier communities through their own programs and in partnerships with others.

Some of these saluted programs are large-scale, multi-year programs and others are quick-turn innovations for a specific community need, he said.

“We became aware of some of the impressive work the (LSIC) was doing through its education campaigns and work to reduce commercial tobacco use through our connections at the Center for Prevention,” Keefer said.

The Blue Cross Blue Shield research and education center learned of Lower Sioux’s other health programs when working with other tribes, he added. “Lower Sioux was cited as a leader in their work regarding nutrition and overall health.”

Hammer was uniquely prepared to work broadly on community health. An enrolled member of the Lower Sioux Indian Community from a long-time community leadership family, she has a bachelor of science degree in nutrition and dietetics from Minnesota State University, Mankato, and completed a graduate dietetic internship program at the University of Delaware. She became the dietitian and diabetes coordinator for LSIC in May, 2013.

This position involves working with tribal members from all age groups and educating tribal and community members on various nutrition related conditions such as hypertension, diabetes, heart disease and weight loss. In doing so, she collaborates with the American Indian Cancer Foundation on healthy eating within American Indian Communities in Minnesota and Indian Health Services.

The collaboration with other groups extended to developing a Healthy Native Foods Toolkit that tribes and Indian health organizations may use. And she serves as the Lower Sioux Title VI director for administering nutrition requirements and menu planning for the Elder Nutrition Program.

Recognizing these health risks, the Lower Sioux Tribal Council launched a Health and Human Services Advisory Committee (LSHHSAC) in 2015, and a year later the tribe opened its Lower Sioux Health Care Center with physicians, nurses, dietitian and dental services, and a pharmacy.

Also in 2016, the tribal council approved a Honoring Little Crow with Healthy and Indigenous Foods Initiative resolution that has put several measures in motion, Hammer said.

First, the advisory committee crosses all age groups and in turn reaches most people in the community. Hammer said she is especially pleased that young people are part of the community planning and noted that two committee members are Redwood Valley Senior High School Honor Roll students (Ty Larsen and Jaidyn Probst) at nearby Redwood Falls.

Moreover, the committee has worked with staff at the tribe’s Jackpot Junction Casino and its Lower Sioux Recreation Center on menu planning to make food served at community events healthier. “We don’t need donuts and chips and dip at committee meetings, and we don’t need menus for community meals that contribute to our health problems,” she said.

An exciting part of this awareness is engaging Jaime Angarita, a native of Columbia and veteran West Coast chef now the head chef at Jackpot Junction in the planning for healthy and Native foods menus.

“He really is interested in learning more about Native foods and the (nutritional) value of what we are eating,” she said.

Tying all this together are community events such as a “diabetes bingo” and an elder nutrition awareness program for senior members of the tribe, fitness classes and programs such as a running club, taekwondo, an open gym for all ages, and – what Hammer called – “just looking out for each other.”

The latter comes from most of the approximately 1,000 residents at LSIC all know each other. Awareness of their own health needs and risks raises awareness about their neighbors and relatives as well, and information is shared.

Hammer and Keefer said U.S. health statistics show disparities among ethnic American communities with American Indian and Native Alaskan groups generally at the bottom. What’s more, the disparities may be greater than what is documented by government agencies; conditions such as “pre-diabetes” and “pre-cancer” aren’t tabulated – especially where health professionals’ diagnosis is scarce.

Keefer, for instance, cites research by the U.S. government’s Centers for Disease Control (CDC) that found in a 2015 survey 7.2 percent of the U.S. population – or 22.3 million people –had been diagnosed with one form or another of diabetes.

The American Indians/Alaska Natives population, in contrast, had 14.9 percent of men and 15.3 percent of women diagnosed with the disease.

The Lower Sioux and Minnesota’s 10 other tribal communities are within the national range for Native communities. But Hammer suspects it may be higher from lack of diagnosis although that is improving with greater health care services such as Lower Sioux’s.

“We know being a mother isn’t the only reason for feeling tired,” she said.

A final note: Blue Cross Blue Shield of Minnesota is engaged in several programs supporting health and nutrition at Minnesota’s Native communities. Its Center for Prevention helps fund the American Indian Resources for Cancer Prevention project through the American Indian Cancer Foundation. Through the American Indian Healthy Eating Initiative it supports the Leech Lake Tribal College work on creating healthy food access and reclaiming indigenous foods. And, the Blue Cross Blue Shield of Minnesota Foundation provides grants to the Native American Community Development Institute, and a 2017 grant to the Red Lake Nation supports the Protecting the Health and Safety of Elders program.