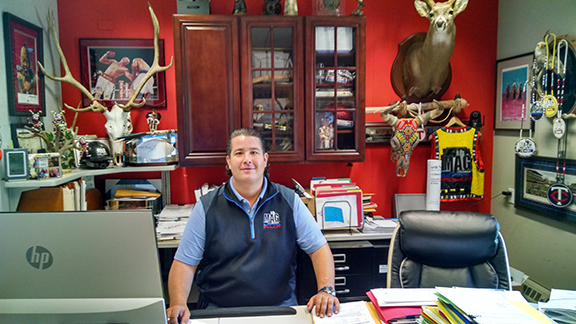 When Tony Goze was presented with an opportunity to start a business back in 2007, he was both smart enough to recognize his own limitations and where to look for help to overcome them.

That is the origin of MAG Mechanical LLC, of New Hope, that now employs 20 construction workers to build and install from $10 million to $15 million in heating, ventilation, air conditioning (HVAC) systems and related piping each year at new and remodeling construction sites.

“Luck doesn’t hurt, either,” said Goze, who is listed on documents as chief manager of the family-owned, and certified Native-owned, company. But as often noted in case studies of business success, Goze’s luck was derived from seeing an opportunity and seizing it by using resources that come from his own environment and surroundings.

This is a message stressed by the Goze family as it encourages other Native Americans to be entrepreneurs and pursue dreams and opportunities.

Tony Goze, 39, grew up in Minneapolis in a Ho Chunk family originally from the Black River Falls area of Wisconsin. He began working for a sheet metal company after high school that got him involved in the construction industry.

The owner of that company “saw something in me” and moved him into the office. He was made a project manager by age 20, overseeing projects generating $12 million a year in revenue.

Branching out started by using neighborhood and community connections. A high school friend reached out to Goze to join him in a restaurant business at a hotel near the Mall of American. That involved three years in which he took over the business, and later sold it in 2006. “I was really burned out by the restaurant (and catering) business,” he said.

That brought him back to the construction field and working with a HVAC company. He was doing that when another old connection, an elementary school friend from south Minneapolis, called with a business opportunity. Nick Tilsen was living on the Pine Ridge Indian Reservation in South Dakota. Tilsen and colleagues secured grants to build the Thunder Valley Community House on the reservation and wanted Goze to install the HVAC equipment.

The hitch was that the grant support required payments be made to a company, not to individuals. Goze needed a legal company to do the work.

Here’s where tapping nearby resources for a project a good distance away became important for the startup of a new Native-owned business.

Goze called his dad who had extensive business experience. His father, Michael A. Goze, knew how to incorporate a company and MAG Mechanic was founded in 2007. Tony chose the company name as a tribute to his father even though the initials also work for other members of the family.

Mike Goze is the chief executive officer of the American Indian Community Development Corp. (AICDC) that has extensive property and business holdings in south Minneapolis and the American Indian Cultural Corridor along Franklin Avenue. He has also worked in chemical dependency programs and is a licensed salesperson and home-ownership counselor in Minnesota real estate programs.

While he helped get MAG Mechanical up and running and is listed as owner, it has been his son’s business, he said. “I’ve been mostly a consultant for Tony,” he said in an interview.

The senior Goze does plan to be more involved down the road as the company continues to grow and as he eases from some of his other corporate and volunteer activities, he said. “It will be 10 years, in June, that I’ve been at AICDC and I do get involved with a lot of other things,” he said.

Reaching for help within the family was one way MAG Mechanical utilized local resources. Another was to better prepare for operating the business.

“I wasn’t prepared for what I was starting to do, so I went back to school,” Tony Goze said.
That meant enrolling at nearby Dunwoody College of Technology in a two year program to study heating, ventilation, air conditioning and refrigeration systems. He continued to operate the upstart MAG business as a tech student.

That was the big year and is a little misleading, Goze said. MAG became a subcontractor in building and equipping U.S. Bank Stadium, the new home of the Minnesota Vikings football team. A lot of HVAC equipment and piping was temporarily held by MAG while being installed at the stadium; thus, “revenues” reflect the price of equipment and materials that were placed and billed to the stadium.

“We’re getting away from adding material (costs) on top of contracts,” Goze said, which represents more of an accounting change than anything else.

As result, Goze rounds off 2016 company revenues to $10 million and last year’s revenues at $9 million. Generally, however, business has held steady despite the shift in accounting.

MAG has worked as a subcontractor with several of the largest construction firms in Minnesota and the Upper Midwest region with the stadium and other large projects. A few other projects have involved tribal enterprises in Wisconsin and a few in Minnesota. Currently underway is a ballroom and restroom project at Mystic Lake Casino for the Shakopee Mdewakanton Sioux Community.

The MAG formula for using local resources and connections within tribal and area communities is stressed throughout state and local entrepreneurial programs and through federal policies that encourage minority owned businesses. The practice works, and is being repeated.

On April 10, out of the Pine Ridge where MAG’s first project was undertaken, the Thunder Valley Community Development Corp. (TVCDC) announced one of its workforce training officials has started Thikaga Construction Co. to build 13 homes on TVCDC property.
TVCDC bears a striking resemblance to the senior Goze’s AICDC. Both groups encourage indigenous entrepreneurship with supportive training programs. Thunder Valley may become a case study example for other tribes and programs, however, by offering a new ownership structure.

Thikaga (Lakota for “building homes”) is set to convert from primary TVCDC ownership over time to being a majority employee-owned enterprise on the Pine Ridge.