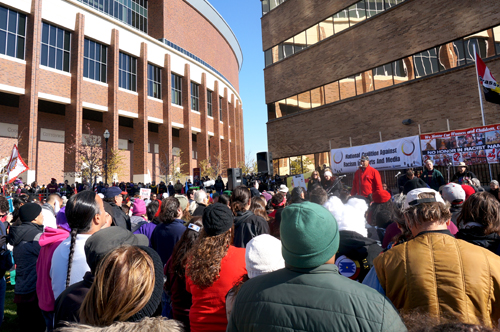 In the weeks since thousands of native

people and their allies converged on TCF Stadium to protest the

Washington NFL team’s offensive name, those involved in the

#NotYourMascot march and rally have continued the conversation with a

focus on maintaining momentum toward a name change.

of stereotypes is difficult to eradicate,” Robert DesJarlait, a Red

Lake elder, said. He carried the eagle staff to lead the People’s

of Minnesota campus on Nov. 2 as an organizer for Save Our Manoomin.

starting point. But it’s the beginning of the process to eradicate

such imagery and restore pride and human dignity to Native people.”

Organizers of the march said while the

Washington team name is the most racially offensive, their battle to

end the use of native mascots in sport does not end there.

“We need to go after not just the

NFL, but the NHL and major-league baseball also,” Jason Elias, a

All-Star game when it was here in Minneapolis. One thing I would like

Bellecourt who is the founding father in the fight against Native

mascots. He truly deserves the credit.”

Elias plans to continue the battle by

focusing on schools and using anti-bullying policies to target those

#NotYourMascot is a coalition of

No More-Wisconsin, Protect Our Manoomin, Twin Cities Save the Kids,

The march and rally for the

Minnesota-Washington football game, which drew a crowd of between

stadium from several directions, was the largest so far to protest

the use of native mascots by sports teams. Organizers vowed to

protest at each of the remaining Washington football games this

season. On Nov. 23, hundreds of protesters took to the streets in San

Francisco before the San Francisco-Washington game.

Opposition to the Washington team name

players. Representatives of most of these groups spoke at the

“I think the thing that struck me

the most while I was marching was the notion that this was, in

essence, a civil rights march,” DesJarlait said. “We were

imagery that is not only evoked by Dan Snyder, but discriminatory

imagery that is embedded in the history between Euro-Americans and

Native Americans … One approach to maintain pressure on Dan Snyder

is to establish a nationwide alliance – an alliance that is

inclusive of all the various anti-mascot organizations and also

include non-Native groups. If more emphasis is placed on civil

accept that his team’s name is racist. But the dynamics of civil

Ojibwe and her daughter, Mika, joined the march that began at

Northrup Auditorium. She was struck by the number of fans entering

the game who pushed back at the protest.

stadium, the group walked past several football fans – both for

Minnesota and Washington. I overheard one Vikings fan say to a rally

participant, ‘I don’t know what you guys are making a big deal

about. They’ve had the mascot for years. It’s tradition.’

Obviously, he has a different frame of reference for what tradition

means,” she said. “The rally made my daughter and I feel a lot of

stereotypes in sports media and is speaking up.”

Jase Roe, who helped organize the

mascots are a symptom of a deeper issue. “I grew up being ashamed

of who I was,” he told the crowd gathered at American Indian OIC

before the two and a half-mile march. “For many of us today, it’s

more than a mascot or a name. It’s about taking pride in who we

After the rally, Barrett called on

leaders who spoke that day to continue the fight.

Speakers at the rally included leaders

of many native nations from Minnesota and elsewhere, members of

Congress, former NFL players, the mayor of Minneapolis and

representatives of national groups such as the National Coalition

Against Racism in Sports and Media.

“The march definitely brought the

community together. I saw so many individuals, families and community

organizations come together to have a united voice about the mascot

issue,” Barrett said. “I hope that the enthusiasm and spirit of

the day doesn’t end with the rally. We need to have the leaders

that were present continue to push the issue forward.”

Oklahoma, is a veteran journalist and author who lives in the Twin

PHOTO: Two rallies converged on TCF Stadium on Nov. 2 to protest the Washington NFL team’s mascot. Former Minnesota Vikings player Joey Browner addressed the crowd to speak about his Native roots and his objection to the mascot. (Photo by Alfred Walking Bull)

Coalition Against Racism in Sports and Media organized the rally that

began at TCF Stadium. The #NotYourMascot march was organized by a

coalition of grassroots organizations not formally affiliated with