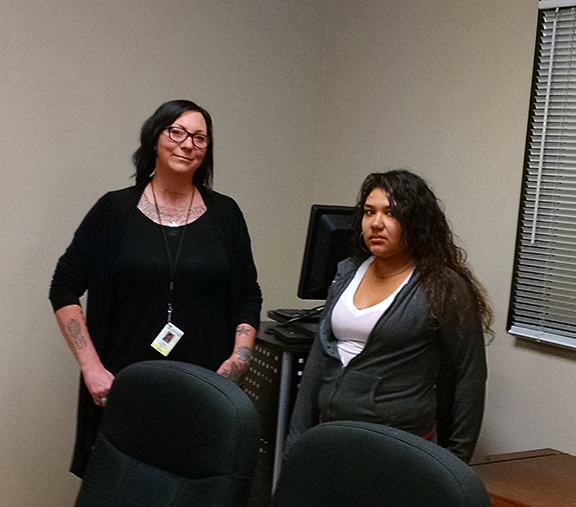 No one wants to hear the word “Oops” uttered at a construction site. And not at healthcare and medical facilities, either.

So printed on a wall above blackboards in a carpentry classroom at Summit Academy OIC in North Minneapolis is the carpenters’ proverb: “Measure twice and cut once.” That also sums up what the adult students are doing with their lives, said Steve Shedivy, director of marketing.

Literally, the old adage means carpenters and construction workers should double check their measurements before sawing lumber or putting building materials into place. Figuratively, for everyone else, it simply means to prepare thoroughly before taking action.

Summit Academy (SAIOC) offers 20-week job training programs that ready students for apprenticeships and internships in the construction trades or in healthcare and medical-related career positions.

The program offerings vary during the year, Shedivy said.

Using Minnesota state government projections, the school notes that there will be $6 billion in construction projects in the Twin Cities metro area by 2018. Nationally, the aging population is driving 5.6 million new healthcare jobs within the next four years.

For many students wishing to prepare for expanding job opportunities, a lack of a high school diploma is a large barrier to success. SAOIC has started a unique 10-week GED certificate program to precede the training programs.

Native American students are a small but growing percentage of SAOIC enrollment, Shedivy said, but could increase with the GED preparation program. Roughly half of the Native American population in Minnesota left school before graduating, according to various federal and state studies.

It’s still too new to determine how the 10-week GED preparation, tutoring and help with a personal study program will affect SA enrollment. There are technical training programs at Minnesota community colleges geared to similar career paths, but accessing those programs is not easy for adults without high school diplomas who want to go back to school.

Meanwhile, the logic of nonprofit training programs for recognized real world jobs would seem to be patently obvious. That isn’t the case in most parts of America.

OICs (Opportunities Industrialization Centers) were started in 1964 by theologians serving primarily Black Americans in depressed and under-served areas. The OIC of America network organization, based in Philadelphia, says there are currently 38 affiliate organizations in 22 states “fighting for economic and racial justice through workforce development of underserved and underrepresented communities.”

SAOIC is one of three such programs in Minnesota. The others are the American Indian OIC in South Minneapolis and the Northwest Indian OIC at Bemidji.

National survey results show these programs work. The national organization said 24 responding affiliate programs reported nearly 12,000 men and women have trained in their programs, and 10,000 of them completed technical education requirements – an 87 percent completion rate despite personal and economic hardships.

The Northwest OIC hosted Gov. Mark Dayton, other state officials, and officials from the three Ojibwe nations surrounding Bemidji (Red Lake, Leech Lake and White Earth) in August, at which time the governor announced an $880,000 grant for training programs and GED education for people in that broader community. Annual $250,000 grants are to follow for what will be called the Anishinaabe Basic Education Initiative.

Summit Academy students talked about how important such education and training programs are for them, their families, and their communities. Jacqueline Yellowfeather (Ojibwe) was in the first phase of training as a community health worker (CHW) and was nervously awaiting word on an internship with a chemical addiction halfway house in St. Paul. “I will graduate the program in November. One of the things I so want to do is work with girls in group homes who I feel I can really help,” she said.

Yellowfeather said that at Summit Academy she started with goals of “getting all A’s and B’s. Not all (grades) are A’s yet, but I’m getting there. I’m close.”

Katrina Todd (Leech Lake Ojibwe) is in the Medical Administrative Assistant program. This won’t be the end of her education. She’s now looking at following that with a pharmacy technician or admin assistance program through either SAOIC or the American Indian OIC programs, or something similar at St. Paul College. Friends and relatives told her about these programs, she said. Scheduling of program offerings and balancing needs for child care led her to SA at this time.

Grabriel Corbesia (Dakota) grew up in South Minneapolis and is now in the second phase of Carpentry training. It took him some time to figure out what he wanted to do in life, he said, and then the SAOIC program awakened him. He laughs at coming full circle. “My dad was a carpenter, too.”

DeAnna Williamson (Blackfoot and Sioux) is in her first phase of Electrician training. That preparation is important for her going forward, she said, but not simply for preparing for good jobs in the electrical, utility or related construction trades.

“My long range goal is to be an entrepreneur,” she said. She wants to buy, restore and then resell homes to “good families.” “That’s what my father was doing when I started working with him,” she said.

Electrical repairs and updating is extremely important for restoring homes, she said. “I want to be able to do that work myself.”

All four adult Summit Academy students have goals and are preparing for jobs and careers that Minnesota will need and won’t be shipped abroad to other countries.