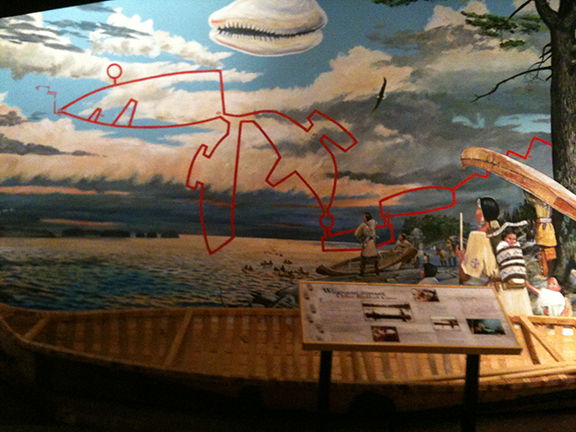 One major exhibit in the Bois Forte Band of Chippewa’s Atisokanigamig (Legend House) shows how the Ojibwe people – over centuries – migrated to Northern Minnesota and the Western Great Lakes, creating a path a new federal law hopes will encourage tourists to follow.

Details for bringing the Departments of Commerce and Interior and federal agencies into collaborative efforts with tribal entities are still to be worked out. The new law, however, brings hope to Bev Miller, executive director of the Bois Forte Heritage Museum, that heritage and cultural curiosity will be another driver of tourism to Native communities.

In October, for instance, a group from the Mille Lacs Band of Ojibwe paid a visit to the Bois Forte museum. Students from Nett Lake schools visited the next day. Meanwhile, a regular stream of Canadian First Nation tour groups related to the Bois Forte come across the border each year to study at the museum while having a recreational outing to the Lake Vermillion area and Bois Forte’s Fortune Bay Resort and Casino.

In step with the new law, Miller wants to build on heritage and culture. “We would like to see more interaction with our elders and youth and this is going to happen real soon here,” she said.

To that end, Miller and colleagues added a new exhibit in October showing regalia, the clothing and ornamentation preserved by a Bois Forte family since 1919.

“This bill will empower Native communities to tell their own stories and build their own economic opportunities,: Schatz said when it passed the Senate. “For too long, tourism has focused on so-called major destinations and while that’s important, we have the opportunity to support cultural revitalization and economic renewal through passage of this bill.” Thune called it a “common sense bill” that he thought would be helpful to the Dakota, Lakota and Nakota nations.

Those sentiments were echoed by the American Indian Alaska Native Tourism Association (AIANTA), a lead proponent of the bill. “This legislation will forever impact the ability of our nation’s tribes to share their stories through tourism,” said Sonja Tanner, president of the Twin Cities-based OPOS Tours & Travel who is the Midwest board representative for AIANTA.

“I am eager to see the opportunities for economic development and cultural sustainability for tribes this bill will open up, for all tribal nations, and especially for the 11 tribes of Minnesota,” she added.

Until details are worked out, the new law is mostly an expression of good intentions. But as public policy directives, it does send messages for what may be forthcoming. A summary of the act, provided by Congress, directs the appropriate federal departments and agencies to update management plans and tourism initiatives to include Indian tribes, tribal organizations and Native Hawaiian (and Alaskan) organizations.

These plans must develop proposals to improve travel and tourism data and analysis, increase the usability of public information and federal websites, support national tourism goals, and “identify programs that could support tourism infrastructure in Native American communities.” They also call for agencies to work with tribes to develop visitor “portals and assets” that showcase and respect the diversity of Native Americans, share local Native heritage through the development of bilingual signage, and improve access to transportation programs for building capacity for Native community tourism and trade.

How these policy directions are carried out will depend on the commitment of a new U.S. administration that will be sworn into office in January, and by how much follow through a new Congress will provide starting next year. There is no question, however, that the law did hold widespread bipartisan support as it moved through Congress and was favored by tourism and trade promotion associations.

Roger Dow, president of the U.S. Travel Association umbrella group, said when the bill passed the House of Representatives in September that his trade association was pleased the law would expand travel and tourism to the Native lands, and “particularly allow them to attract more international visitors, whose trips often have a tremendous positive ripple effect on the surrounding economy.”

This is especially important for the Grand Portage, Fond du Lac, Bois Forte, Red Lake, White Earth and Leech Lake nations’ hospitality and tourism industries, and to a lesser extent at Mille Lacs. All are partially or heavily dependent on Canadian and other international visitors.

In the first four months of this past year, for instance, Commerce Department data show international travel to the United States dropped by 2.3 percent compared to the same months of 2015. Canadian travel was down 16 percent. This is happening when the Commerce Department estimates that Indian Country locations get about 5 percent of international travel visitors in recent years.

Agriculture, forestry, the commodities industry, and basic manufacturing observers can explain the problems for why this is happening. Instability abroad, uncertainties about the UK and European Union economies, and a strengthening U.S. economy at home makes the dollar desirable and raises its value in currency markets. This makes American products and commodities, and travel here, more expensive for anyone converting other currencies into dollars.

For those reasons, diversifying the Native tourism and hospitality industries is as important as diversifying tribal business portfolios.

It hosts an annual American Indian Tourism Conference that provides an educational forum on building cultural tourism and how to work with international and domestic media to tell of authentic travel experiences and about travel destinations. Also, AIANTA works in partnership with George Washington University in a Cultural Tourism Certificate program that soon will be online to help tribal organizations and participants with best practices and trends in cultural tourism.

Cromer Howard said her group has an international outreach program that participates in some of the world’s largest travel shows including ITB Berlin, Showcase USA-Italy and U.S. Travel Association’s IPW. “We encourage tribes from all over the country to participate internationally with us, and would love to see participation from Minnesota tribes,” she said.

AIANTA has an online portal (NativeAmerica.travel) that helps prospective travelers discover Indian Country destinations. It also has a public lands partnership program that identifies public lands projects on and near reservations to help some tribes collaborate with other agencies in building tourism and encourage economic development.