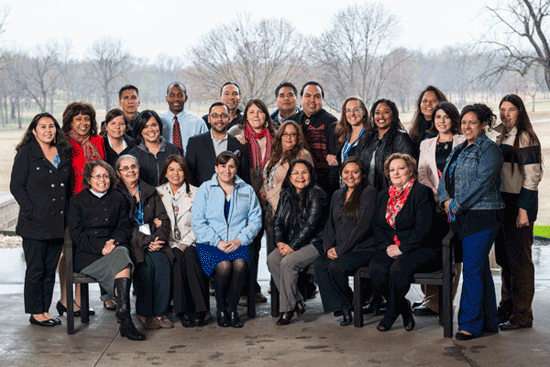 Being of service to tribal communities

priority for the three Native women who will be graduating from

Native Americans in Philanthopy’s Circle of Leadership Academy in

November. The organization selected a nation cohort of tribal

citizens from around the country during its April 2012 Native

Philanthropy Institute in Los Angeles. Among those selected were four

women from the Minneapolis-St. Paul area who work in the Native

improve their community through their own leadership development in

According to NAP program associate

Diana Manuel, the program’s mission is to strengthen and sharpen

the necessary skills to be an effective leader in Native communities

For Apple, that means a chance to

cultivate her professional abilities. “I joined to develop my own

leadership skills and networking so I can be effective in my career,

job, community and within my own life. I wanted this to be a

challenge to get out of my comfort zone.”

Apple is currently the Development and

Grants Coordinator for the Tiwahe Foundation, a Minneapolis-based

philanthropy that engages Native American individuals and families to

improve their circumstances through giving to explore their culture,

“Prior to joining CoLA, I had not

really known about philanthropy or even what that meant. I hear that

a lot – philanthropy – what does that mean? I think being on this

learning journey, learning about their work on a national level,

raising awareness and funding to Native organizations has been a

great help at understanding empowerment. It’s not just a leadership

program, but it’s an effective one,” Apple said.

Part of NAP’s efficacy is measured

not just in what it can teach, but how it can connect its academy

members to others around the country to mentor when needed.

“I’ve always been sort of familiar

with NAP and familiar with their work. I got this email and thought,

‘this is a really cool idea,’” said Ross. “I was curious about

how this was going to be different and I applied. It’s tribal members

from all over the country, you submit your resume and your interests.

And they brought us all together. It was so cool to get together and

to collaborate and see what everybody else is doing and the

you’re not in it alone. There’s people that have been in their

profession for years and there are newer professionals who are just

starting out; some people who are in entry level positions and some

that are executives. There’s such a variety but there’s also that

camaraderie there as well.”

For Ross – who is the executive

advocacy organization – the rewards of her goals are in being able

to share with others around the region and the country.

“Here’s me, the executives director

court judge in the state of Illinois in the same group. It’s such a

spectrum of people and I love it, I love every minute of it. We

really are like a family. It’s another opportunity for me to

network and the more you invest in relationships in other Natives

Because these people now are like my family and this is their home,

it makes that connection much more real for me in the community.”

For Standing Cloud’s part, she has

used her membership in CoLA to springboard into developing a deeper

commitment to her educational community. As a Red Lake Ojibwe, she

was raised and went to school in Minneapolis, spending time on Red

Lake, the Flathead reservation in Montana and Rapid City, S.D.

Her dedication to education came

because of personal experience with her daughter. “I kind of

slipped into education with her. I’d walk her to class every day

when she was in the first grade, I got to know staff and teachers

before getting involved with the Title VII committee. Then, the

job as the Family Engagement Coordinator, where I’ve been since

“When I applied for CoLA, one of the

communities work more closely with each other instead of going

directly to the state or the federal government. My vision was to

help the communities lean on each other, getting the tribes to get

together to reevaluate and reassess how they operate and interact

with the community, having in place some kind of assessment and work

more with other sovereign tribes.”

Before she takes on the task of

connecting tribal communities to one another, Standing Cloud plans to

make herself a resource. “One of the small steps for my action plan

is to just to get my bachelor’s degree, I’m 9 credits away. And

I’m just working on that, everything I’ve done can be counted as

action research. I am working toward the larger vision I had in my

application and part of that was to get my education. I’m a single

mom so I have a Kindergartener and a freshman in school right now.”

She is currently enrolled at Metropolitan State University.

For Ross, giving back to her

respective community is also a priority. Raised on the Turtle

Mountain reservation in North Dakota, she saw first hand how

complacency can breed apathy. “Part of the program is that each

implement. My project is a professional mentorship program,

encouraging employers to have policies that push their staff to be

involved within the community. If you’re going to a meeting or on a

community board, I’ll give you those hours off and education time

to further your education. I would use my staff as an example, I’m

training them to take my job. I don’t want my receptionist to

remain a receptionist her whole life, I want her to get her degree

that needs to be created on a regular basis. When you’re in a job

for so long, you lose vision for the community and what you’re

there for in the first place.”

For all four, their 18-month journey

in expanding their personal and professional horizons comes to a

close on Nov. 7 when NAP will host their graduation ceremony in St.

“I’m really thankful to have been

this cohort. It’s connected me with other regions that I wouldn’t

otherwise be able to be connected. I made great relatives and it

feels really good. My relationships and relative-making is spreading

across Turtle Island and something I can use in the future,”

Americans in Philanthropy, joining its next Circle of Leadership

Academy or to attend the Graduation Celebration, visit