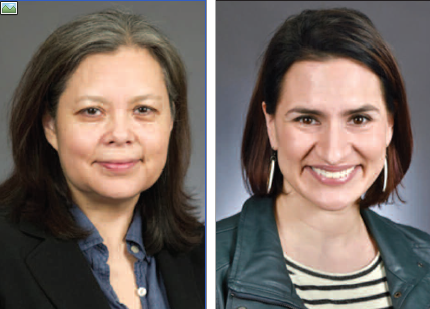 Native American women doubled their presence in the Minnesota Legislature’s House of Representatives this January, but it may be far too soon to declare that the “glass ceiling” holding back women has been shattered.

With the election of Reps. Jamie Becker-Finn and Mary Kunesh-Podein from suburban Twin Cities house districts, the number of Native women has increased to four. This apparent accomplishment occurred as Minnesota voters actually reduced the number of women serving in both houses of the Legislature by four, from 68 in the previous two sessions to 64 for this term.

Meanwhile, Rep. Peggy Flanagan, who won a special election in 2015 and was reelected to a full term this past November, told The Circle she will seek U.S. Rep. Keith Ellison’s seat in Congress if the Minneapolis congressman is chosen chair of the Democratic National Committee.

“There is still much work to do,” said Allen, while acknowledging that the gains by Native women in the past election does signal greater acceptance of Natives and women in general for leadership roles.

Dayton, however, appointed Justice Wilhelmina M. Wright in 2012 as the first African-American woman to serve on the court. With McKeig added to the bench, Minnesota is now one of 10 states that have a female dominated high court.

The four successful House members now role models for future generations – were asked to identify Native women who have inspired them. Justice McKeig was a reoccurring name.

Perhaps not surprising, there are two other sources of inspiration for these Minnesota lawmakers and they are not Minnesota women.

Montana Superintendent of Public Instruction Denise Juneau. She ran unsuccessfully for Montana’s at-large congressional seat and would have been the first Native American woman to serve in Congress. “I so hope she runs again,” said Flanagan.

The other is the late Senator Paul Wellstone, D-Minn. Several of the four lawmakers worked on his campaigns or were involved in programs that he started or that were named after him.

Allen said successes by Native women and other minorities in Minnesota have much to do with local service experiences and the resources that are emerging to help minorities rise up in leadership roles.

The DFL leadership in the House of Representatives, for instance, gives candidates training for campaigning, fundraising and forming campaign committees. “They were a big help for me,” she said.

Another factor, Allen said, is that the women candidates do bring credentials to campaigns for public office. While women often have put careers on hold, she said, they have also been active at the local levels and in service clubs.

These same women have experienced obstacles like double standards, unequal opportunities, and often such basic problems as “what it’s like to live on the minimum wage,” she added.

The same obstacles to opportunities and advancement confront women in workplaces, in education, in the professions.

KuneshPodein said gains across all career and public service fields “are made only when we have corresponding opportunities and that requires inclusion in the process from the very beginning.

“The income and inequality gaps tell us we’re definitely not there for either women or minorities, she said. “But by working hard and supporting each other, we will know we can make an important difference.”

The four lawmakers were asked to identify issues that they will need to monitor and address going forward, both individually and jointly.

High among them are education and economic opportunities. Several cited the still-lagging education and graduation rates for Native and minority children. Allen specifically mentioned how states, Minnesota included, use federal grants and state funds to support needy families, and how those funds have not kept pace with inflation.

Great strides have been made in government-to-government relations with Governor Dayton, they said, but those ties and mutual respect between state agencies and tribal governments, for instance, have never been secure over time.

Mining issues, treaty rights and issues involving water are always matters that can spring on the Legislature and state government, they said. “Sometimes there is bias, and economic issues come into play,” said Allen. “That is always going to be here.”

Flanagan added that these are issues that affect all Minnesotans, not just the Native and minority communities.

Still, there are positive signs that all Minnesotans recognize these common interests. Flanagan and Allen both noted that three out of the four Native American lawmakers represent diverse, suburban legislative districts. “That should tell all Minnesotans that we (Natives) are everywhere,” Flanagan said.

In doing so, it shatters past images of suburbia just as much as it is chipping away at the glass ceiling over Native and all women’s heads.