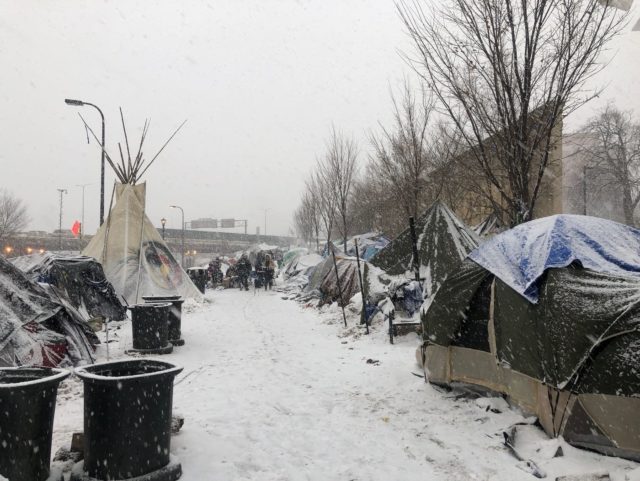 Most of the residents of the homeless encampments in the Hiawatha and Franklin Avenues area have moved indoors to the Navigation Center temporary housing facility, found other housing, or have relocated from the south Minneapolis neighborhood although they may still be out in the cold.

No one knows with certainty where everyone has gone, say nonprofit housing specialists and Native American officials who have been working with homeless campers on the American Indian Cultural Corridor along Franklin Avenue.

But as the Christmas holiday transitioned to New Year’s events, the Navigation Center’s population grew to 135 people, said Elisabeth Loeffler, director of development and communications for Simpson Housing Services. Simpson has contracted with Minneapolis to administer the Navigation Center in partnership with the Red Lake Nation, the owners of the site on Cedar Avenue. It consists of three large tent buildings designed for 120 people, with portable toilets, handwashing facilities and access to social services and hot meals.
In a statement issued on Dec. 21, the city said the site had been expanded to accommodate 15 additional beds in “a safe, warm and service-rich environment.” Loeffler said all were in use at month’s end.

“They are in. They are warm. That was everyone’s first concern,” said Teddi Crowe, a consultant and Rule 25 assessor for the Red Lake Nation who was at the center on Dec. 26. (Rule 25 assessments are needed under law to qualify individuals for chemical dependency public services.)

Across the 17th Avenue side street from the center that day, Minnesota Department of Transportation employees, Minneapolis police and nonprofit service providers were clearing an impromptu encampment that had formed on an embankment of Minnesota Highway 55.

This second homeless encampment formed after MnDOT and city employees cleared what had been called the Wall of Forgotten Natives homeless encampment on Dec. 20. While many from the initial site moved into the Navigation Center and others found alternative housing, some people moved to 17th Avenue.

The city said in its statement that American Indian and social service agencies have assisted over 100 people in finding permanent housing recently, and 28 families had been moved to family shelters.

The initial encampment took shape in late summer and early fall, reflecting the acute shortage of affordable – or low-cost – housing that has become a serious problem for cities all across the country. Service agencies estimated that first encampment had a population of as many as 300 adults and children in September.

MnDOT has been worried about the safety of people living adjacent to high-speed state highways and freeways. Those concerns were amplified as cold weather set in during the fall. A fence was erected around part of the original camp to discourage others from reviving the camp site.

While Minnesota has an estimated 9,000 homeless people, based on Wilder Foundation research, the encampments in south Minneapolis reflect the serious problem of homelessness for the Native American population. Most, but not all, of the campers in the Hiawatha-Franklin area and now at the Navigation Center are connected to the Native communities.

The city’s statement noted that Red Lake Nation has a service coordinator at the center to coordinate services among government and nonprofit agencies. Through this network of service providers, center residents can access traditional Native healing, housing and case management services, and substance abuse treatment.

The latter is a common problem for several of the homeless, said Red Lake’s Crowe. The service providers “try to plant the seed of change. But it’s a learning process,” he said.
Metropolitan based Native organizations have six “navigators” working at the center with the campers to access these services, said Patina Park, chair of the Metropolitan Urban Indian Directors (MUID) umbrella organization for Indian groups and the executive director of the Minnesota Indian Women’s Resource Center.

All this leads to the challenge of knowing who, and how, to “hand off” work among groups for effective and efficient services. About $3 million in public and nonprofit funds have gone into creating the Navigation Center and services for the homeless campers, she said. There is a natural tendency for people to look for ways to evaluate cost effectiveness, but most attempts fail when dealing with care and services for the homeless, she said.

“What is the value of human life? I don’t think any of us want to put a dollar amount on that,” Park said.

In a related event, Amazon Web Services founder Jeff Bezos and wife MacKenzie Bezos contributed $2.5 million to Simpson Housing Services through their Day 1 Families Fund to expand Simpson’s family housing program through the next four years. That grant was part of $97.5 million the Bezos are providing 24 nonprofit organizations across the country that work on family homeless problems. Minneapolis-based Simpson, founded 35 years ago, helps about 3,000 people each year including 300 families and 650 children.

Also, Beacon Interfaith Housing Collaborative announced a drive in early December seeking $1 million in private contributions to launch a building fund for a 70-unit affordable apartment complex. The housing group’s leaders told Minnesota Public Radio that the project is in response to the Franklin and Hiawatha homeless encampment. Beacon and Red Lake Nation worked with Avivo, to move 35 people from the encampment into existing Beacon properties during the past few months.

Down the road, another important source of affordable housing is the Rad Lake Nation’s site where the Navigation Center is now located. Red Lake bought the former warehouse property with plans to demolish existing structures beginning next spring and start construction of a 109-unit apartment and mixed use complex.