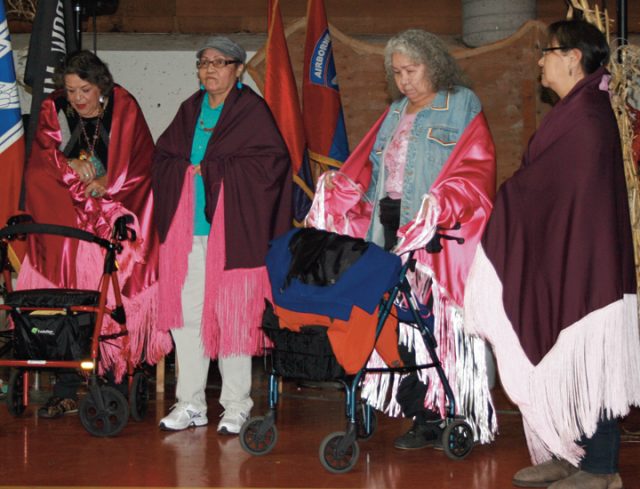 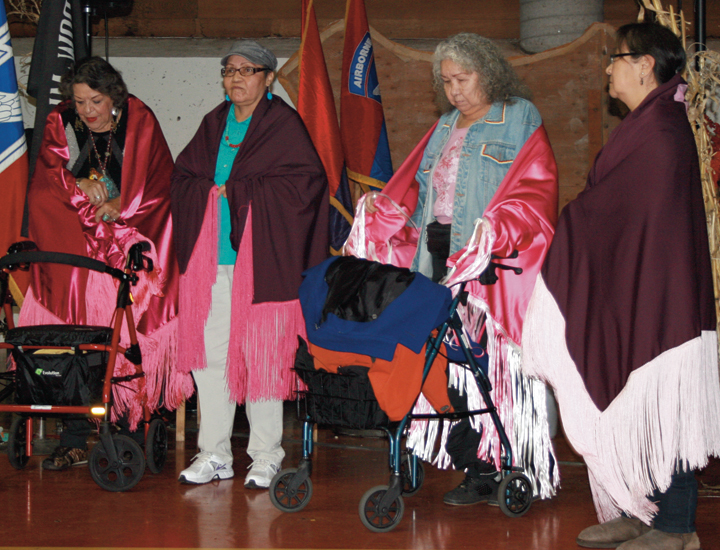 "It not only involves healing from these women coming together to create shawls, but we’re educating along the way. Then, when women in pink shawls come out during powwows, it creates awareness," said Kris Rhodes, Executive Director of AICAF. "It’s a visual reminder to everyone in these community gatherings that there are cancer survivors among us and it gives hope to people with a new cancer diagnosis."

Their funding decisions are based on data analysis conducted by the Minnesota Affiliate of Susan G. Komen for the Cure. Cancer screening rates are lower for American Indian women than other populations in the United States. Data from the Centers for Disease Control Behavioral Risk Surveillance system revealed that in urban areas nationwide, 12.1% of American Indian women between the ages of 40 and 64 had never had a mammogram, compared to 8.4% of women of all other races. According to a press release issued by AICAF, the breast cancer survival rate is 98% if it is discovered and treated in earlier stages, making the disparity in screening especially important to reducing breast cancer deaths among American Indian women.

"What happens a lot of times in the American Indian community is that cancer is seen as a death sentence, and unfortunately that’s not too far from the truth," said Rhodes. "In our population, too often, cancer is found at later stages where it’s harder to treat, so our women are less likely to survive."

Breast cancer is the third leading cause among all cancer deaths in Indian Country, behind lung and colon cancers. According to figures released by the American Cancer Society in 2011, the incidence of cancer in the Native American population in Minnesota is about two times higher than the nationwide cancer rate. Rhodes emphasized that while cancer rates are either declining or staying the same for the majority of the population, cancer rates are actually on the rise for American Indians.

In addition to their partnership with the Minnesota Affiliate of Susan G. Komen for the Cure, AICAF has partnered with Wisdom Steps, a statewide nonprofit organization that focuses on elder healthy living, and the Shakopee Mdewakanton Sioux Community Mobile Mammography Unit.

Laura Keys, a Community Health Worker and the Coordinator of the Pink Shawls Project at AICAF, facilitates two different types of Pink Shawl group meetings throughout the Twin Cities and on reservations in Minnesota. She conducts day-long workshops, which include an education portion with curriculum developed by the Sage Program through the Minnesota Department of Health. To round off the program, all women sew pink shawls to commemorate cancer survivors or lost loved ones.

So far, Keys has held these workshops at the Grand Portage Reservation, Mille Lacs Band of Ojibwe communities in Lake Lena and Hinckley, the Fond du Lac Band of Lake Superior Chippewa Reservation, the Indian Health Board of Minneapolis, and the Urban Wisdom Steps Program. Currently, she has an additional workshop scheduled with the Native American Community Clinic in December.

Keys also holds a series of  informal sewing circles, where women who have previously attended one of the educational sessions gather to help produce pink shawls for cancer survivors in the community. She has held four of these sewing sessions so far, with a core group of six women continuing to attend. The sewing sessions are held at various sites in Minneapolis who have generously donated space for the project, including the Division of Indian Work, All Nations Church, and the Minnesota Chippewa Tribes building. Keys said that the groups attract women of all ages, from teenagers to those in their eighties.

"When I’m doing one of these sessions and I’ve got all of these women together, the environment I try to create is really safe," said Keys. "It’s hard to get people to talk about cancer, and while you’ve got a group of women together making shawls and having a good time, I think it’s a lot easier to open up and start that dialog that people in our community need to start having."

Although the groups often meet to create shawls for specific powwows or gatherings, such as  the recent Thanksgiving Powwow at the Minneapolis American Indian Center, the Pink Shawls Project is ongoing and the sewing circles and workshops are open to women of all ages, free of charge. For more information about upcoming sewing circles, community members can contact Keys via email at: lkeys@aicaf.org.

Rhodes highlights that early detection and smoking cessation are key factors in decreasing cancer mortality rates across the board in Indian Country.

"We’re not going to do anything to move the dial on cancer in our communities until we decrease smoking and increase screening rates," she said.

Keys sees the Pink Shawls Project as an opportunity to help Native women take control of their health by understanding the risks and steps they can take to prevent and treat cancer.

"I hope that more American Indian women are aware of breast cancer, start getting mammograms, and really take their health into their own hands, becoming better advocates for themselves," she said.