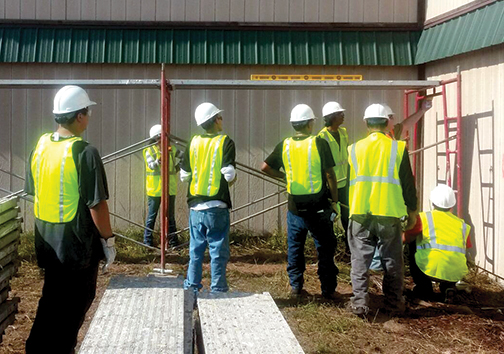 The abandoned Eagle View Motel at Cass Lake, on the Leech Lake Indian Reservation, is coming down in pieces with useful materials stored for later use in building projects in northern Minnesota. Come November, another crew of workers from the Miigwech Aki Deconstruction Co. will do similar salvage work on the remodeled and expanded Grand Portage Lodge and Casino.

Miigwech Aki Deconstruction (“Thank you Earth” in Ojibwe) is a business and training unit of the Northwest Indian Community Development Center at Bemidji. Both the Leech Lake and Grand Portage Bands of Ojibwe contracted with the firm because the salvage work it does, leading to recycling and reusing building materials, is consistent with widely shared cultural goals throughout Native American communities.

The environmentally sensitive work would be reason enough, said Bryan Lussier, the Leech Lake compliance officer for the Tribal Employment Rights Office (TERO). But it is more than that, he added. Contracting with Miigwech Aki “is a form of reinvesting in the community. We want to keep trained, productive people up here.”

Chris Bedeau, director of the program for the Bemidji-based community development center, said 17 construction–deconstruction workers  went through four days of Occupational Safety and Health Administration (OSHA) training and one day of cardiopulmonary resuscitation (CPR) training before starting work on the Eagle View project in September. Most of the workers were residents of Leech Lake while at least one was from Red Lake and another was from Bois Forte, he said.

These workers are now certified from that training. That knowledge and talent is a benefit to the entire northern Minnesota area, said Leech Lake’s Lussier.

“This was the right fit,” he said. “We have worked with Chris and the Northwest Indian (Community Development) Center in the past, and we have many of the same objectives.” 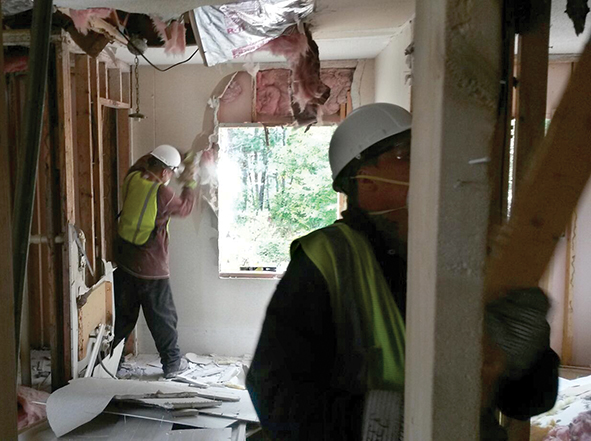 Leech Lake doesn’t have redevelopment plans for the hotel site at this time, Lussier said. However, it was time to clear the property that he described as “dormant” in recent years.

Grand Portage officials saw the same kind of fit with Miigwech Aki. The Grand Portage Lodge & Casino is about two-thirds of the way through a major renovation, said Jeremy Keeble, chief engineer and head of maintenance for the Band. When everything is up and running in new, expanded facilities, Grand Portage will have Miigwech Aki come through in November and remove “a lot of nice furnishings that we don’t want to see destroyed or tossed away in a landfill,” he said.

“We want to see beautiful furnishings reused, more than just recycled,” he said.

The first phase of that upgrading operation was remodeling hotel rooms in 2015. The second phase, now being completed, is a doubling of size for the casino area with a new atrium, improved restaurant and lounge, and a patio. The final stage, to be completed by fall next year, will have old parts of the casino rebuilt into a banquet and meeting center with administrative offices for Grand Portage enterprises.

While the Grand Portage renovation was underway, a Grand Portage tribal councilman read a February article in The Circle about Bedeau and Miigwech Aki doing deconstruction projects in the Twin Cities (“Deconstruction for Mother Earth,” February 5, 2016). “The council member told me we better get Chris up here. They are doing what we want to do,” Keeble said.

At the same time, deconstruction crews in this emerging “green industry” niche try to recapture from 85 percent to 95 percent of building materials that would otherwise be hauled away, burned or simply dumped. Some of it, like woodwork material from the casino, is beautiful and should get reused in homes or other buildings, Keeble said.

The collaboration among Leech Lake and Grand Portage Bands with the Bemidji NWICDC goes beyond being good neighbors; it is actually encouraged under federal minority contracting laws and through tribal sovereignty rights. Some of the earliest federal regulations allowing for Indian preference contracting and employment go back to 1834, was strengthened under the Buy Indian Act of 1910, and was expanded further under federal laws passed in the 1970s.

There are some limitations, however, when tribes are contracting parties using federal funds. Partly to cope with these legal issues, most tribal governments in the Upper Midwest states have Tribal Employment Rights Ordinances, or more commonly called Offices (TEROs).

The Leech Lake Band of Ojibwe has an especially useful explanation of TERO rights and programs online at www.llojibwe.org/td/tero.html .