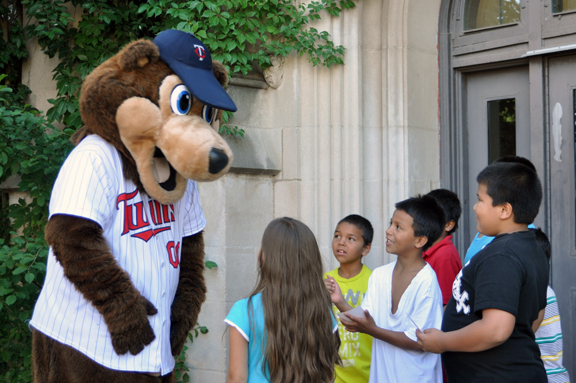 The Little Earth Red Bears won the Minneapolis Park & Recreation Board Youth Baseball League Championship this summer in the 10 Year Old And Under division. In celebration of the team’s success, Little Earth of United Tribes (Little Earth) hosted an awards banquet on Aug. 7 at the Little Earth Neighborhood Early Learning Center.

The event included a trophy presentation and the unveiling of new team uniforms, which were designed and funded through a partnership with the Indian Health Board. The uniforms and the Red Bears’ team name were created to honor Trinidad Flores, a 16-year-old Little Earth resident who passed away this April due to complications from a heart transplant.

“Trinidad was the heart and soul of a lot of the youth programming we did,” said Nathan Ratner, Little Earth’s Volunteer Coordinator.

Representatives from the Minnesota Twins Baseball Club (the Twins), another of the program’s partners, were also on hand at the event to distribute back-to-school backpacks to community youth. Over the course of this season, the Twins have invited the team to Target Field for a tour and offered the youth classes on the intersections between science and baseball.

Miguel Ramos, the Director of

Emerging Markets at the Twins, said that the organization is excited to

and feel part of the Twins organization,” said Ramos. “We work closely

with them, but not only to teach the kids baseball. We want the kids to

provide youth with an opportunity to win. That seems like a simple

thing, but for a lot of the youth that participate in our programming,

Earth’s Volunteer Coordinator. “Starting there I think the positive

effects of this program radiate out.”

high school athletes, thereby motivating them to be successful

said Ratner. “Not that sports is going to take them through a

professional career, but that those same skills will carry over and

guide them for their entire lives.”

and meaningful bonds with adults in the community. Muck-wa and

the cornerstones of the program, often working up to 25 hours a week

them as members of the community and as consistent, positive influences

does more good than sports or anything else does,” said Ratner.

“They’re amazing and they’re always there for the kids.”

who has been coaching for over two years, is motivated by the

supportive relationships she is able to build with the players. “I

do it for the kids, to let them know that there are adults who are

willing to take the next step and care about them,” she said.

who has seven years of coaching experience, seeks to share the positive

influence sports have had on his life with youth in the community. “Ever since I was younger, I played sports. I believe it kept me out of trouble, so that’s why I do what I do for the kids.”

at Little Earth enjoy the program because of the lively environment

created by coaches, staff, and their fellow players. Players Jose

favorite things about baseball, including batting and pitching.

“My favorite thing is just being out there and participating,” said player Sequoi Bryant. “It’s a fun way to get exercise.”

year, 46 youth participated consistently in the four divisions of

Little Earth’s baseball program. Youth of any gender between 8-18 years

old are eligible to participate. Although the program’s first priority

is to serve youth in Little Earth’s community, enrollment is open to

all. This winter, Little Earth plans to continue its youth basketball

program, which is also open to 8-18 year old youth. Within the next

more information about these programs or to enroll a youth player,