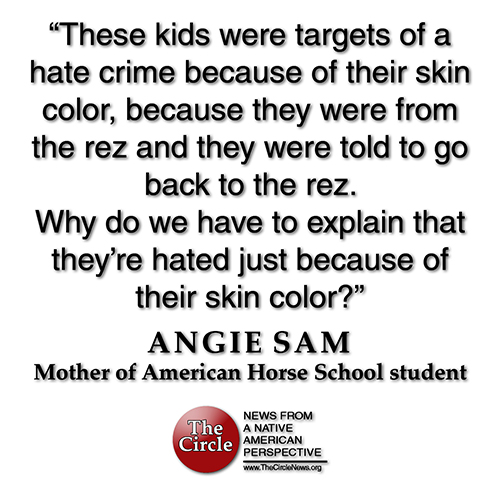 A 41-year-old man was charged with

disorderly conduct for his behavior during a Rapid City Rush hockey

game in January, during which Lakota children from the American Horse

with beer and heckled.

in Seventh Circuit magistrate court in Rapid City. If convicted, he

the area called the incident a hate crime, child abuse or assault and

sought charges of a greater magnitude.

The perceived lack of justice in this

Rapid City’s Native American and white communities, including the

December 20, 2014 killing of Lakota resident Allen Locke by a white

police officer. The officer was not charged in case.

The deadly shooting, coming just one

day after Locke attended a protest against police brutality, ignited

suspicions of a racial motive. Captain Dan Rud of the RCPD sought to

lay those suspicions to rest. "This officer is white, the

suspect is Native American,” he said, “but it’s not a race deal.

race. Had the race of the Police Officer be Native American and the

suspect white the results would have been the same."

Rud’s comments were disregarded by

Lakota residents of Rapid City, however, for whom everything about

daily life in the divided city is racial.

The American Horse School Board is now

pursuing federal hate crime charges against those adults who

allegedly abused the 57 Lakota students in Rapid City. At a community

Oglala Sioux Tribal officials were present to address the issue.

year-old Robyn, one of the children who attended the now-infamous

color, because they were from the rez and they were told to go back

to the rez. Why do we have to explain that they’re hated just because

of their skin color?”

the matter, "This incident is gut wrenching for me and its gut

wrenching particularly because it involves young children and so

For Minnesota Natives, who have

established over the past four decades strong social and political

networks among themselves and with other communities, the depths of

racial tension in Rapid City can be difficult to fathom. The

in Rapid City live below the federal poverty line, which, in 2014 was

the poverty rate for Natives living in Anchorage, Alaska. Minneapolis

is the second poorest urban Indian population, with 48 percent of

Native residents living in poverty. While roughly 12-percent of the

population, Native residents own just 3-percent of businesses in

Rapid City is situated on the western

slope of the Black Hills, not far from where Americans first found

gold in 1874. Although Lakota control of the Black Hills was affirmed

territory searching for riches. Two of these prospectors, John

Brennan and Samuel Scott, with a small group of men, claimed the site

of the present Rapid City in February 1876, which was named for the

spring-fed creek that flows through it. They promoted their

new city as the "Gateway to the Black Hills."

Later that year the

U.S. Congress decided to open up the Black Hills to development and

break up the Great Sioux Nation. In 1877, it passed an act to make

7.7 million acres of the Black Hills available for sale to

remaining in the Black Hills were supposed hostiles who were hunted,

killed, and removed to reservations. Untold billions of dollars of

gold have been mined from the Black Hills. The Lakota have yet to see

a penny in compensation for extraction of precious metals from their

According to Black Hills Knowledge

Network, an online resource on information about Butte, Custer, Fall

their non-Native counterparts to die before their first birthday.

For every 1000 Indian babies born in

the city, 13 die within their first twelve months of life.

“I think one of the things Native

deeply divided it is racially. Most of the people there are either

white or Indian, which exacerbates a cowboys and Indians mentality.

of anti-Indian vibe that you might see more subtly in Detroit Lakes,

but in Rapid it would be blatant, intense. I feel anxiety whenever I

bit, and if there’s someone sleeping in the car, whether it’s my

wife or kids, I say ‘you better wake up, we’re coming into

Rapid.’ As an Indian driver you’re going to be automatically

profiled—the cops assume somebody’s passed out drunk in the car.

So you kind of find yourself taking certain precautions that you

don’t think about here in Minnesota. If I’m going into Detroit

Lakes I don’t wake anybody up, I don’t clean my car up.”

organizer and resident of Minneapolis and Rosebud, SD.

More than a dozen witnesses provided

on Voting, from which developed a clear theme: Suppression and

Jean Schrodel, a professor at Claremont Graduate University in

California, and an expert witness at the hearing told the Rapid City

Journal, “There has been more voting rights litigation involving

suppression can be seen by looking at past elections, Schrodel said.

Only 12 Native Americans have ever been elected to the state

Legislature. Out of the 105 seats in the Legislature, only three are

The way to measure if a race is

accurately represented politically is to take the percentage of

representatives from a minority group and divide it by the percentage

of the overall population of the minority group in the area. Ideally

that number should be one or close to it, Schrodel said. South

The shooting of Allen Locke and the

chapters in a long string of European on Lakota incidences dating

back to the mid-1870s. Indian activists point to the following cases

from the past 16 years as evidence the historic violence continues

bodies of eight homeless men were found in Rapid Creek, Six of whom

were Native. Many suspected foul play, but the Rapid City Police

In all, some 25 individuals, a majority of them American Indian, have

lost their lives under suspicious circumstances along Rapid Creek

over the past two decades.

people on the street with a BB gun, throwing bags of urine on them,

and pelting them with rocks and eggs. Two of the white women involved

in the incident pleaded guilty to felony, racially motivated hate

crimes. Both women were put on a 5-year probation.

in Blackhawk, a small community outside of Rapid City. Capps had

allegedly committed assault and was gunned down for allegedly pulling

a knife on Olson. Capps was shot five times, including once in the

back. The shooting was, according S.D. Attorney General Marty

2012 against Olson and the county, claiming their son was unarmed

for a “routine stop.” Tiger, and four other Native individuals,

according to S.D. Office of the Attorney General’s report “appeared

to be under the influence of alcohol.” Officers Nick Armstrong and

revealed a .357 caliber revolver and opened fire on the officers

killing Armstrong and McCandless and wounding Doyle. Tiger was

fatally wounded in an exchange of gunfire. The Office of the Attorney

General ruled the attack as “unprovoked” and that Tiger’s death

was suicide by cop. The slain officers were memorialized by the city

as heroes, while it was revealed in the media that Tiger had a

In an official investigation by South

disclosed the following: “He wanted to die because he had no job,

no home, and nothing to live for.”

students in the Rapid City Area Schools district dropped out of

school in 2012 (the last year such statistics were published),

compared to 2.4 percent of their non-Indian peers.

Roger Campbell, director of the South

the biggest challenge for Native students is poverty and racism.

"A child without basic needs such

economically privileged student. How do they get to school? How do

they concentrate if they are hungry? Do they have a home to go to at

racism or feels disconnected at school and unsupported by their

community…will they see the relevance of school?"

more than 42 percent of the inmate population of the Pennington

inmate population. This overrepresentation stands in contrast to the

incarceration rates are significantly higher than the neighboring

states such as Iowa, Minnesota, Montana, Nebraska, North Dakota and

Wyoming. With an overall decrease in crime down nine percent over the

higher than the national average, growing over 500 percent from 1977

close 1,110, over thirty percent of the total population, while only

constituting about nine percent of the state’s population.

“Growing up in and around Rapid

City, and being with AIM throughout the years, I know that Natives

It is surprising when South Dakota Natives first come to Minnesota.

Here in the Twin Cities, the community that has a tradition of people

of all races working together, whether it’s in the neighborhoods or

whether in politics. This kind of cooperation is almost unheard of in

Means does recall one fleeting

produced record floods on Rapid Creek and other streams in the area.

Nearly 15 inches of rain fell in about 6 hours. According to the Red

injured. In addition to the human tragedy, total damage was estimated

flooding has an estimated recurrence interval of 500 years, which

“Today, the only time Indians and

non-Indians seem to communicate is during a crisis. I remember back

in the day when there was the giant flood, and AIM and the local

residents came together to rescue people, to repair all the damage,

and clean up the city. Immediately after that moment of opportunity,