Fears of federal recognition loss and

hopes for enrollment increase at play 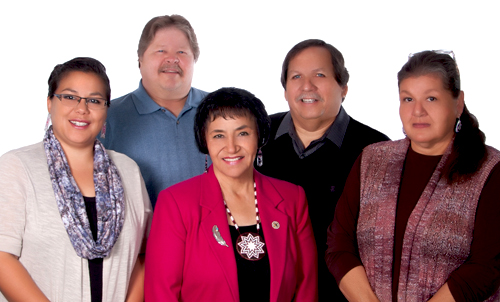 “The people of White Earth voted for

a new constitution, and a judge upheld the validity of that

referendum. So why don’t we have a new constitution at White

Reform, the question is rhetorical. After all, she’s had a front

who support the new tribal constitution and those oppose to it. Both

sides are polarized, passionate, and deeply entrenched after years of

infighting which surfaced in conjunction with the first White Earth

The latest dust-up — between White

Earth Chairwoman Erma Vizenor, who supports the new constitution as

taken place in the pages of White Earth’s newspaper, Anishinaabeg

In the December issue Vizenor used her

prevent the tribal newspaper from printing information about

voted to censor the press from printing any more information or

updates on the Constitution of the White Earth Nation,” Vizenor

wrote. “The vote took place on Nov. 24 following a motion by

Secretary/Treasurer Tara Mason and a second by Kathy Goodwin to

suspend all information on the Constitution in this tribal newspaper.

I am deeply grieved that censorship and repression of information

important to the entire White Earth tribe have taken place. What does

such action say about democracy? Regardless of whether you are for or

against the approved Constitution of the White Earth Nation, you

should have access to all information regarding this important and

came at a curious time, given the new Constitution was ratified in

2009 by delegates of the White Earth Constitutional Convention. Four

Earth Nation in northwestern Minnesota became the first member of the

With a membership of nearly 20,000, the low participation seems to

reflect apathy on the part of many tribal citizens. Still, the

turnout was twice that for most tribal elections.

Despite the effort to quiet her

opinions, Vizenor has circumvented the gag-order and continued to

communicate with her constituents.

Korea, or other countries run by dictators, suppress information,”

Vizenor told The Circle. “Our constitution puts into place a

system of checks and balances which will prevent the kind of

dictatorship we’ve seen within our own council.”

In February, Vizenor produced a full

color pamphlet that she direct-mailed to White Earth citizens. In it,

the chairwoman addressed her critics and assured supporters that

constitutional reform is on track.

“For those of you who believe

efforts to transition to governing under the approved Constitution of

the White Earth Nation have stopped, please know, I am doing

Earth people,” wrote Vizenor. “While the Tribal Council voted to

censor any news or articles regarding the Constitution in the

Anishinaabeg Today, this action did not erase the vote of the people

to approve the Constitution.”

The White Earth Constitution, the

first in its 148-year history, provides for the White Earth Nation a

foundation for self-government, including the power to decide

qualification requirements for its members. When implemented, the

Constitution will change the prerequisite for tribal citizenship from

Those seeking to prevent its

implementation have argued that, under the new system tribal

Mason, the council member who motioned for the gag-order, says the

“White Earth is recognized by the

federal government as a member of the Minnesota Chippewa Tribe, not

as an independent nation. There’s a chance we could lose our

federal recognition and never get it back. I will not jeopardize

Mason was elected in 2014 along with

her mother, Kathy Goodwin, and Steven “Punky” Clark. The three

new representatives have formed a majority voting bloc on the

phone calls. “They’re saying, ‘We elected you to stop her. Why

is she still doing this?’”

Mason says it would take “an act of

Congress” for her to feel comfortable moving forward under the new

“A majority of our land on this

reservation is held in trust by the federal government. If we pull

out of the MCT what happens to that land? There has not been enough

varying opinions on what could happen. I think these questions

weren’t raised before people had a chance to vote.”

Lineal descent to shore up numbers

whether or not the current council (serving two-year terms) supports

it,” Lorna LaGue said. “This is not a debatable issue. The

debates happened before the referendum.”

constitutional reform say the new rules are necessary to prevent the

White Earth is a member band of the

Minnesota Chippewa Tribe and has been governed by its constitution

since the Tribe’s inception in 1934. Six of the seven Chippewa

up the MCT. White Earth is the largest band in the state.

The Red Lake Band of Chippewa is the

only Anishinabe Nation in the state not currently part of the

Minnesota Chippewa Tribe. In 1934 it declined to participate, as its

chiefs. The Red Lake Band developed its constitution in the 1950s,

electing its first chairman in 1959.

In 2012, the Minnesota Chippewa Tribe

contracted with Wilder Research to conduct a study and produce

as is (one-fourths blood quantum), Wilder Research found the

projected membership declines from just over 41,000 in 2013 to just

enrolled citizenship is projected to decrease from around 20,000 to

According to Wilder Research, once

White Earth implements the new rules defined in its constitution, its

enrollment will double within the first 12 months, assuming most of

those who are eligible apply for tribal citizenship. By 2098, under

Movement founder and a member of the White Earth Nation, is a

supporter of Constitutional reform, which he calls, “a return to

traditional rule, when tribes decided their membership for

themselves, when there was no such thing as blood quantum.”

Earth Circle of Survival Tribal Council, a statewide coalition of

White Earth members who support independence. He says they are

motivated by self-preservation; under the current system, many people

are unable to enroll their children and grandchildren.

“We have to stop thinking about

ourselves. We have to start thinking about the seventh generation,

like our ancestors did for us. And we can no longer blame the white

man for trying to terminate the tribes,” Bellecourt said. “Now

started the reform movement after he was elected White Earth

Secretary/Treasurer in the mid-1970s. In the ensuing years, AIM

remained active on White Earth; it built a school, fought for hunting

Once its new constitution is

withdraw from the Minnesota Chippewa Tribe.

The White Earth Constitution was

citizens were invited to participate. Forty delegates were sworn in

by a tribal judge to represent the wishes of families, reservation

communities and the White Earth diaspora (which, is scattered

throughout the state with concentrated populations in the Twin

Cities, Duluth and on the Iron Range).

Delegates engaged in a visioning

process to define the values and aspirations of the White Earth

Nation. Following that visioning process, Vizenor appointed a team of

legal experts and scholars of various disciplines to write a draft

constitution. Delegates ratified each article before it was included

in the final document.

Among those participating in the

process were renowned writers of the White Earth Nation: Gerald

Vizenor, who crafted the final, lyrical prose of the document; and

Anton Treuer who translated its preamble into the Ojibwe language.

“I approached Gerald Vizenor because

our constitution espouses. At first he backed away from the idea,

saying he had never written a constitution before. Finally, he

agreed,” Erma Vizenor said, who says she’s not related to the

writer but, “would be honored to have such a man as part of my 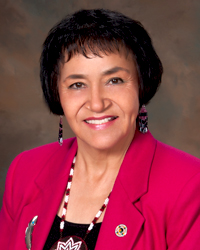 While Erma Vizenor and other tribal

the White Earth Constitution — the last step before it is formally

adopted — LaGue and other tribal officials, with the support of a

$380,000 grant from the Bush Foundation, are making their way around

the state of Minnesota, holding town hall constitutional forums to

educate their citizens on the changes that will come with

Supporters of the White Earth

Constitution remain frustrated by the snail’s pace of the

implementation process. Following a March 16 meeting of the White

Earth Council, however, LaGue says there is hope for progress.

information about the constitution.

gag-order. I imposed the suspension because I hoped it would bring

Erma to the table to discuss the proposed constitution,” Mason

said. “It didn’t work; she didn’t come to the table. So I

lifted it and many of my constituents are really angry.”

however, voting once again with a bloc that included her mother and Clark, to re-impose the prohibition against information on

remained defiant. “When we take office as tribal leaders we swear

States,” she told The Circle. “What our council has done in

suppressing freedom of speech is a clear violation of the First

Amendment. This incident is a cry for constitutional reform.”

Preamble to the White Earth

The Anishinaabeg of the White Earth

Nation are the successors of a great tradition of continental

liberty, a native constitution of families, and totemic associations.

The Anishinaabeg create stories of natural reason, of courage,

We the Anishinaabeg of the White Earth

Nation in order to secure an inherent and essential sovereignty, to

promote traditions of liberty, justice, and peace, and reserve common

resources, and to ensure the inalienable rights of native governance

for our posterity, do constitute, ordain and establish this

Constitution of the White Earth Nation.

The White Earth Constitution may be

read in its entirety at:

EDITOR’S NOTE: The printed version of this story indicated Steven "Punky" Clark as Tara Mason’s father-in-law, which is unverified,  this story has been corrected.