Line 3: It’s the sequel to the Sandpiper but larger. Last year, the White Earth Ojibwe people joined with many others to stop the Sandpiper, the fracked oil pipeline. Now Enbridge is back with another line – same route, same problems. This month, people will have an opportunity to ask questions and comment on Line 3, the Canadian based, 900,000-barrels-a-day, tar sands pipeline.

The Court ordered environmental review released by the Minnesota Department of Commerce is huge and offers some good information. It also brings some deep concerns, including why the “No Build Option” is not recommended.

The project would grant an entirely new corridor for perpetuity through northern Minnesota. That project is not technically a “replacement” since it is in a new corridor and is a much larger pipe.

If you are a Native person, you might want to know why you don’t matter. The Department of Commerce reports that “American Indian communities and individuals have unique health issues associated with historical trauma and structural racism. …American Indians in Minnesota have greater health disparities and poorer health outcomes compared to other racial and ethnic groups in Minnesota…”

The report also states, “…the uprooting of the people from their traditional lands… creates psychological and health impacts for generations. Displacement brought about a loss of traditional ways of making a living, of providing food for the table, and of being in relationship with one another… ”

The report also says, “The impacts associated with the proposed Project and its alternatives would be an additional health stressor on tribal communities that already face over-whelming health disparities and inequities…”

The Department of Commerce notes the Tribal community bears the largest impact of this proposed project, “Any of the routes selected would negatively affect tribal resources and tribal members. The… relationship to the land and the rights tribal members have in the ceded territories complicates the traditional notion of mitigation. The ceded territories and the rights that go with them are not mobile and cannot be transferred…”

And then there’s this, “…A finding of ‘disproportionate and adverse impacts’ does not preclude selection of any given alternative. …This finding does, however, require detailed efforts to avoid, mitigate, minimize, rectify, reduce, or eliminate the impact associated with the construction of the Project or any alternatives.”

In other words, does this mean, “deal with it”?

The Department of Commerce also noted that the preferred project route would cross more wild rice lakes than any other proposed route.

Where is the spill data?

Enbridge has tried to bar the disclosure of this information from the public, stating that some “bad actors” might use this information. Park Rapids based Friends of the Headwaters pointed out that “…Enbridge pipelines on its mainline route are exposed above ground or shallowly buried in many locations. Google Earth can be used to find such pipelines hanging above streams. This imagery reveals that many pipelines are within a few feet of each other. The type of person who would do deliberate damage already has plenty of information about where to do such damage….”

There are some spill scenarios in the report, but none has been done, for instance, on the St. Louis River. If I was Duluth’s mayor or city council, I would want to know what the plan was to protect the Great Lakes. 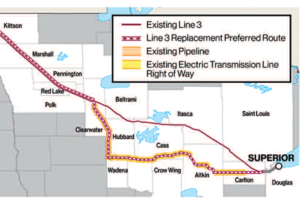 There’s not a lot of discussion of this in the document, although this is a pretty big problem and a precedent. There are at least eight operating pipelines in Minnesota, of which most have been around thirty or more years. This is the first “abandonment” of a line and would set a national precedent.

Let’s say this problem does not get solved now… and so another five lines or so get abandoned, and then what? Time to fix the problem now. Let’s find out what’s under the pipes which Enbridge says are in a state of “deterioration”, in other words, they are leaking.

This year, Representative Rick Hanson (DFL, 52A) proposed the first attempt to give landowners a right to make decisions on pipelines in their territory. The idea of tribes and the state regulating abandonment in our pristine watersheds might be a good idea. Many landowners say that should be solved before we talk about any new pipelines.

The impact on the place the pipe comes from, where it goes, and the overall atmosphere from 900,000 barrels a day of tar sands oil might take a bit more work to figure out. It’s more than the cancers and health impacts on the Dene people who live downstream from the tar sands projects.

One Canadian report notes, “No one knows what will happen when a mine has exhausted a site, shuts down its operation, and leaves. Tailings pond abandonment is an unproven technology whose success is predicated on modeling rather than real world experience. . .. Billions of cubic meters of contaminated water soon will be sitting untended, with no active pumping, in abandoned ponds adjacent to the Athabasca River.”

And finally, there is a question of need. The Toronto Globe and Mail suggests that pipeline companies and politicians are overbuilding tar sands pipe lines by 2.4 million barrels a day capacity. And it is not clear how much tar sands oil, according to the Canadian Association of Petroleum Producers, will be produced in ten or fifteen years.

Now would be the time to ask if this pipeline is needed. Informational meetings are set to take place in June around Minnesota.