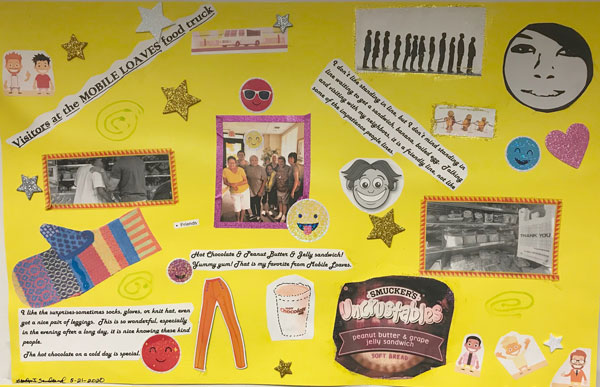 Before the coronavirus pandemic (Covid-19), residents at Bii Di Gain, an elderly housing complex for Native Americans on Franklin Avenue in Minneapolis, stayed busy with activities like shopping, bingo or having a congregational lunch at the Gatherings Café in the Minneapolis American Indian Center in Minneapolis.

But when Minn. Gov. Tim Walz issued a stay-at-home order in March, most of that ceased. And to find ways to fill that gap, Diane Grooms, head of elder support services for the American Indian Community Development Corporation, has began a couple of projects to help keep the residents’ minds busy.

“I began to hear it all the time right after the stay-home order – I’m so bored,” Grooms said.

The Minnesota Department of Health recommends giving seniors books, puzzles, crosswords, and other non-technological activities to get their minds off the pandemic and relieve stress.

Television isn’t always the answer – you can be bombarded with negative Covid-19 news such as death counts 24 hours a day.

First, they began a “Tree of Life” in the lobby, where the leaves where elders’ expressions of how they felt.

“There was no right or wrong,” Grooms said. “Just them saying how they were doing, what they looked forward to, or how has this (pandemic) changed you.” 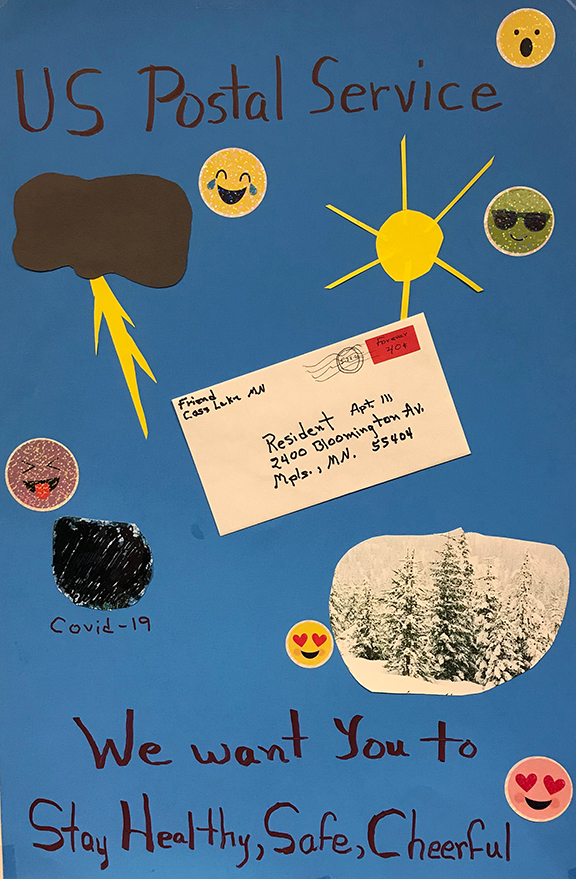 Grooms then began, with the help of administrative assistant Ron Partridge, an art project that allowed residents to show their support for those in the community who risked exposure to the virus to help maintain a normal sense of order, like postal workers, police officers, firefighters, emergency responders, the Division of Indian Work and the Minneapolis American Indian Center staff.

Grooms distributed poster paper, pens, glue, glitter and markers and the resultant artworks were displayed in the windows along Franklin Avenue for the public to see.

However, because the streets became unsafe after the rioting following the killing of George Floyd at the hands of Minneapolis police, Grooms decided to pull the work down after a few days, including a striking piece by Kathryn Guimaraes of White Earth Nation.

Guimaraes made a mask, shredding the paper to resemble eyebrows, Grooms said.

Groom wants to make clear that Bii Di Gain supports the police, but the posters supporting MPD may have triggered looting or vandalism to the building. 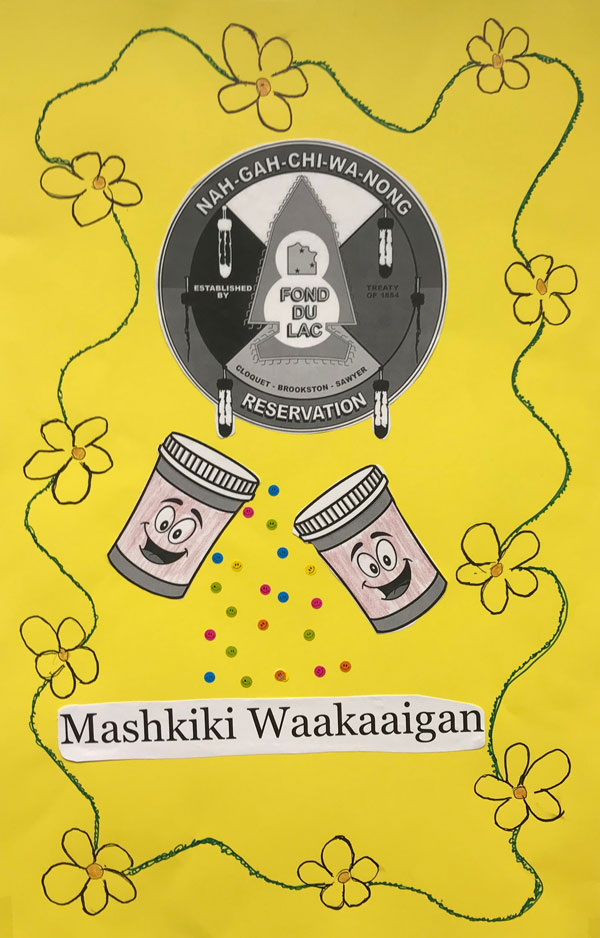 “They (police) have always walked through here and the property and made sure everything was safe for the elders,” she said.

She said the windows were soon boarded up to thwart vandalism anyway. The art has been moved to the fitness center in one of the units, which straddle Bloomington Avenue.

Grooms said nearly all 49 residents are over 70 years old and live alone. The art project brought out work from some who never participated in any get-togethers, Grooms said.

She said bingo was always a favorite gathering prepandemic. So, she devised a way to keep the activity alive by distributing two bingo cards to each resident and printing out and delivering 10 numbers a day.

By Wednesday someone usually bingos and is awarded prizes ranging from a roll of quarters to dish soap or paper towels or a book by a Native author donated by the Hennepin County Library. They call the office to tell one of the staffers they bingoed.

The quarters come in handy for the laundry and are coveted prizes as residents can’t go the bank for change anymore due to social distancing, she said.

After Hennepin County officials heard how successful the bingo program was, they provided a minigrant for Bii Di Gain to expand to nearby St. Paul Home Apartments, which will start June 22. St. Paul is home to Natives as well, Grooms said.

It’s been tough for the elders, Grooms said, since the pandemic hit. Visitors have been limited and the first-floor windows are still boarded up. Residents aren’t shy about voicing their displeasure.

Sometimes Partridge will take their orders of bratwurst or burgers and grill outside and take the charcoaled dinners up to their rooms. 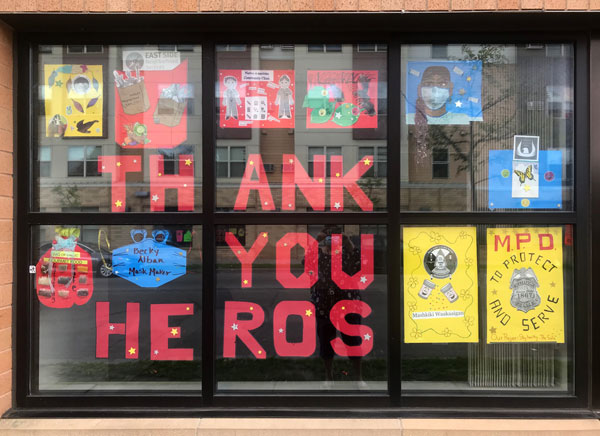 According to the Minnesota Department of Health, those 65 or older are at greater risk of serious illness from the coronavirus.

Walz eased some restrictions on visits to congregate living centers recently, but Grooms said visitors are asked to wear masks, and staff disinfects the facility regularly.

The health department encourages those visiting seniors to keep a calm tone, don’t parrot frightening death statistics, be positive and share inspiring stories from your own life.

Reassure your loved one, tell them what they mean to you, and don’t say you’ll visit soon when you really have no idea when you’ll be back, the department says.

Since the stay-home order was given, staffers could have stayed at home, but Partridge or Grooms have always maintained hours in the office.

“I just didn’t want to make them feel like we abandoned them,” she said.

The Minnesota Department of health has information at

And a guideline for those who want to do “window visits” with people in long term care, at: www.health.state.mn.us/diseases/coronavirus/hcp/ltcwindows.pdf