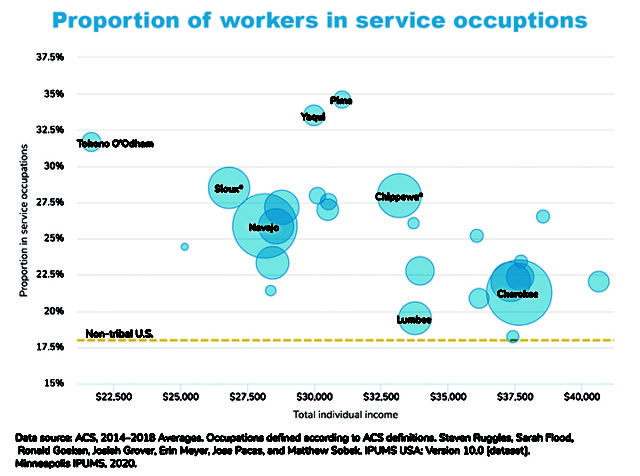 Tribal economies, health care systems and governments are disproportionately harmed by preventive measures such as social distancing that have closed hospitality and service industries that are the backbone of tribal economies, a new survey study shows.

The Center for Indian Country Development (CICD) at the Federal Reserve Bank of Minneapolis surveyed tribal leaders across the country to measure how tribal governments and enterprises are coping with the COVID-19 pandemic.

Not well, was the findings. The report issued April 10 found that more than 30 percent of occupations in several tribal communities are in what government and academics define as service industries. That compares with an average of 18 percent for the entire U.S. economy.

The large tribal groups tracked as Sioux and Chippewa in the northern states, and the Navajo in the Southwest, are all within the 25 to 30 percent range for occupations at risk.

The report was prepared by James Robert Colombe, project manager; Casey Lozar, a Minneapolis Fed vice president and director of the CIDC center, and Donna Feir, the CIDC’s research economist. The survey was conducted between March 23 and 27.

The Minneapolis Fed is the regional bank for the Ninth Federal Reserve District that includes Minnesota, North Dakota, South Dakota, Montana, 26 counties in northern Wisconsin, and the Upper Peninsula of Michigan. Despite the bank’s regional responsibility, its CIDC serves as a national research center for the entire Federal Reserve System.

This much was widely known throughout Indian Country. The CICD survey, however, starts quantifying tribal economic exposure and points to inevitable future problems for tribes coping with the pandemic.

As an example, they noted the National Indian Gaming Association tallies that Native gaming employment provided 787,878 jobs nationwide in 2019 that resulted in $34.5 billion in direct and indirect wages.

“Another way Native American employment and communities are more vulnerable to social-distancing policies is that tribal enterprise revenues often fund the operational activities of tribal governments, which are themselves large employers in reservation communities,” the authors said.

Among other survey findings:

– More than 80 percent of tribal governments have declared a state of emergency; all responding tribes have taken some steps to protect community members. These measures range from using remote work arrangements on up to closing schools, offices, enterprises and stopping all tourism.

–  From approximately two-thirds to 75 percent of surveyed tribes anticipated needing additional revenue to continue providing government services as a result of lost enterprise revenues. The authors concluded these tribes will need “significant additional federal and state assistance to safeguard their communities and resuscitate their economies.”

As a result, the Fed authors concluded the occupational and industrial structure of tribal employment, “and the structure of tribal government funding through tribal enterprises, make Native Americans disproportionately exposed to the economic fallout of the measures taken to prevent the spread of the coronavirus.”

The Fed survey can be accessed at https://www.minneapolisfed.org/article/2020/covid-19-and-indian-country-early-snapshot-reveals-disproportionate-economic-exposure-and-uncertainty