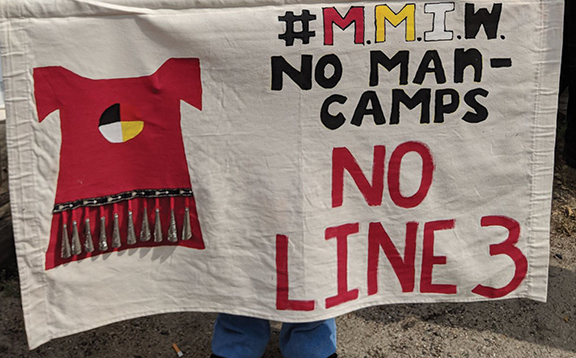 “Free, Prior and Informed Consent (FPIC) is one of the most important principles that Indigenous Peoples believe can protect their right to participation. It is embedded in the right to self-determination. The duty of States to obtain Indigenous Peoples’ FPIC entitles Indigenous people to effectively determine the outcome of decision-making that affects them, not merely a right to be involved.”
– UN Expert Mechanism on the Rights of Indigenous Peoples

This past month Fond du Lac signed an agreement with Enbridge to approve a new corridor for Enbridge’s proposed Line 3, the seventh pipeline Enbridge will have in Minnesota, six of which already cross the Fond du Lac Reservation.

Enbridge was pleased with the agreement, noting in the press release, “Today, Enbridge and the Fond du Lac Band of Lake Superior Chippewa signed a mutually beneficial agreement that assures construction of the Line 3 Replacement Project through the reservation, while protecting vital natural and cultural resources for tribal members. The agreement provides for a new 20 year right-of-way term for Line 3 Replacement and Enbridge’s five other existing pipelines on the Fond du Lac Reservation… Specific terms are confidential.”

Fond du Lac has significant leverage with Enbridge on this project, as Enbridge really feels it needs this line. The terms of the agreement are sealed and many wonder why Fond du Lac did not order a complete review of the new route prior to an agreement. There are others who wonder what provisions are provided for the clean up, decommissioning, liability, and bond protections for the tribal government and the wild rice beds. Others ask what planned reduction of oil moving through the pipes is planned as a part of the agreement. After all, this is a time of climate crisis. The fact is that this agreement impacts all tribes, and not simply Fond du Lac. ­

Fond du Lac has been faced with a “Sophies Choice moment” – when the band must decide which ecosystem and which lakes to sacrifice for Enbridge. Facing a pipeline directly across the Big Sandy Lake Flowage, the Minn. Public Utilities Commission (MPUC) pushed the Fond du Lac band to decide which of two alternative routes to approve, rather than sacrifice Big Sandy. There had been no hearings or assessments on these alternative routes. While the commissioners publicly said that they felt like Enbridge had “put a gun to their head”, this was certainly a gun to the head of the Anishinaabe.
“At the end of June, the Minnesota Public Utilities Commission’s …gave the Fond du Lac Band of Lake Superior Chippewa and Enbridge 60 days to negotiate the final route through parts of St. Louis and Carlton Counties,” Enbridge writes. Sixty days is a short time between strawberry and wild rice harvests.

At best, the process is questionable in terms of consultation or consent from the Anishinaabe. The state is mandated to comply with government-to-government interactions with Minnesota’s tribes contained Executive Order 13-10. The state process in consultation is a joke. The Anishinaabe have been told of the pipeline project, not asked about it, and then the project forced through without consent.

Last year, Enbridge forced the resignation of the Tribal Liaison, Danielle Oxendine Molliver. Molliver said she resigned because of “the failure of the state of Minnesota to fulfill its obligations of good faith and fair dealing with the tribe…with the Line 3 project.”
Oxendine Molliver told The Intercept that the department had not adequately responded to the concerns of tribal members and had marginalized her after Enbridge claimed she was being overly sympathetic to indigenous pipeline opponents. “Enbridge found this video of you at [a meeting], and they went to the governor’s office, and they’re just really concerned that you’re too sympathetic and that you might provoke more resistance,” Oxendine Molliver recalled the department official telling her. “You can still go, and we still want you there, but you’re going to be a greeter.”

Despite five tribes intervening in opposition to the process, and clear opposition by state government agencies and judges, the MPUC approved a certificate of need and forced a pipeline decision onto Fond du Lac. That is not consultation.

In this millennium, consultation is no longer enough. Consultation, in the style of Minnesota, is letting the Fond du Lac band decide what to sacrifice for Enbridge’s seventh pipeline.

For now, an agreement stands. Many are sad this day, and none more so than the Fond du Lac tribal members. As for the “confidential agreement” made under extreme duress, tribal members wonder how many police the tribe may bring on to force a pipeline over tribal lands.

It’s clear that Enbridge will need an exit plan, decommissioning and clean up. We are hopeful that Fond du Lac has outlined that, as we will all be impacted. We also wonder if this agreement should have the approval of the Minnesota Chippewa Tribe, as it impacts all the bands. In the meantime, the Fond du Lac, Red Lake, Mille Lacs and White Earth bands continue to appeal the Public Utilities Commission environmental impact statement, and the process.

Tribal members and Water Protectors face arrest and continue to oppose the proposed Line 3 project, noting climate change, threats to water, and the question of who gets to decide the energy infrastructure of northern Minnesota.

In the meantime, there are legal appeals and a long list of permits not approved. In late August, the Canadian Appeals Court rejected Trans Mountain Pipeline, based on a lack of consultation. What is for sure, is that it’s not clear that this pipe will be built at all.