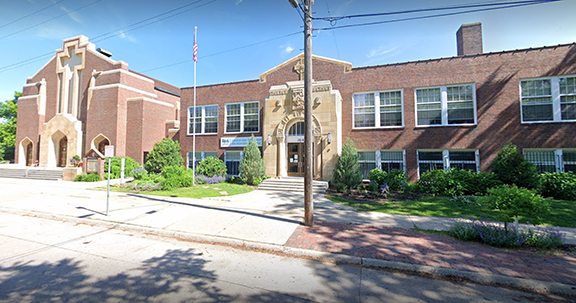 Bdote Learning Center is starting a new teaching internship program to boost the number of Dakota and Ojibwe language and culture teachers for Twin Cities metro area schools.
The South Minneapolis immersion school (3216 E. 29th St.) held an open house for prospective student teachers on Dec. 11 and more than 25 people stopped by to learn about the program.

Some were just curious and stopped by to learn more, said Liz Cates, the project director. But most were interested in pursuing an internship to develop classroom skills for Native language and culture, she added.

Just like college education programs that pair prospective teachers with experienced classroom teachers for a quarter or semester of student teaching training, Bdote is reaching out to college students and others who have some Dakota or Ojibwe skills that could be developed for classroom teaching.

The internships also apply to people who may be trained to work as classroom assistants.
“We know they are out there,” said Cindy Ward-Thompson, the Bdote director. “We need to get them out of the woodwork and into the classroom.”

Cates said there are currently 18 known teachers in Minneapolis and St. Paul schools who are known to possess language skills with either of the two dominant Native languages found in Minnesota. “We are hoping to double the number of people in classrooms who have these skills,” she said.

The student teacher internship program is called “Empower Our Own: For the Next Generation.” Bdote’s three-year program is supported by a $1,056,000 grant from the Administration for Native Americans (ANA) at the U.S. Department of Health and Human Services.

Bdote hopes to land from seven to 10 interns in each of the next three years to prepare them for immersion work in metro area schools, Cates said.

Ward-Thompson said the Twin Cities now has one of the largest Native populations in metro areas across the nation. Many have some level of language and culture knowledge.
“Not everyone out there can actually work in a classroom setting,” she said. “Our effort is to find who can.”

The need for culturally aware people in classrooms is important, Cates said, whether they work as actually classroom teachers, classroom assistants or as team members in culture and language immersion programs.

Some prospective Bdote interns already have education credentials. Several others are Native college schools who have language skills and are preparing for education careers. The internships should help them become aware of immersion schools, like Bdote, and of cultural and language programs that are being started or expanded at several schools in the metro area.

Bdote’s leaders are especially pleased by interest and responses they are finding among Native students at the University of Minnesota and Augsburg University in Minneapolis, Cates said.

Bdote is a language and culture immersion school with 110 students that was started in 2014. It focuses on the two dominant Native languages and cultures, which Bdote refers to as “Minnesota’s first languages.”

The Bdote name was chosen because it is the Dakota word for the confluence of the Minnesota and Mississippi rivers, considered the birthplace of Minnesota’s original people.
The school explains on its website (https://bdote.org) that it is a language immersion, and place-based charter school, to engage children, their families and other community members in the education of the students. The founders saw a need to restore the language for Native students who too often were “being lost in other schools not reflecting their identities.”

Education research shows that students from immersion schools after initial years outperform students from English-only schools, Bdote said. The goal of Bdote is for students to speak, read and write Dakota or Ojibwe at levels at or near those of first speakers and increase understanding of other people, cultures and communities.

For other educational goals, Bdote and immersion schools seek to develop cognitive capabilities, greater facility with English and linguistics, improve academic performance throughout the school year, a sense of accomplishment and higher level of motivation for learning, better ACT and SAT college entrance exam scores, and ultimately, prepare students for greater career and social opportunities.

The new internship program is consistent with other language and culture restoration efforts at Bdote that are supported by grants from the Minnesota Indian Affairs Council. Cates is also director of that state supported program.