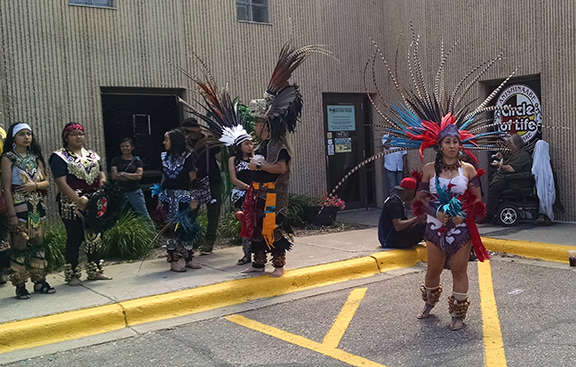 Circle of Life Home Care Anishinaabe recently gathered friends and clients to an open house in south Minneapolis to celebrate its continuing commitment to providing home health care and personal services and to honor the legacy of founder Patricia Yager.
The June 14 celebration, with drummers, dancers, a community meal and program, has become an annual open house event. But it also followed the late May announcement that the home services firm was acquired by San Francisco-based Alpine Investors and will now operate as a unit of TEAM Services Group, of San Diego. Terms of the transaction were not announced.

Yager, a Leech Lake native born at Bena, founded Circle of Life Anishinaabe Inc. (COFHCA) in 2006 when she perceived a great need for in-home services for her Ojibwe elders and by others in the Twin Cities area where she was living. A resident of Lake Elmo later in life, she died unexpectedly while on a business trip to Arizona on June 14, 2018. She was 68.

While the firm had a distinct Minnesota-based founding, it quickly grew as Yager recognized similar problems for Native elders and families all across America’s Indigenous communities.

Himmat Singh, chief executive officer, told reporters at the memorial and open house that care providers now have 1,500 clients in those states.
“We remain true to Pat’s values,” Singh said. “Our mission includes the statement ‘Honoring Those We Serve’.”

Molly Montana (Cheyenne River Sioux), the strategic projects manager, and Singh said COFHCA works with Medicare and state disability programs to certify home care providers and employ people who are mostly family members of the elders, children and others they serve. This makes for an almost even number of company employees and clients although some clients need more attention while others are served less regularly, they said.

Changing demographics, with a growing older population all across America, makes home care services essential, Singh said. These needs are especially great in Indigenous communities where people live distances from health care services and where Native populations have chronic health problems such as diabetes, he said.

The services the companies provide include PCA, or personal care assistants; homemaking services such as household cleaning, home chore services to help consumers manage their PCAs, RN Supervision where public health agencies require monitoring of nurse care in the home, and Respite Care where PCAs must be specialty trained for provide care.

The three companies Yager and her team created over the past 13 years include the Circle of Life Home Care Anishinaabe, that has both the national office and a Minneapolis metro office in Minneapolis’ American Indian Cultural Corridor. That company also has operations working out of offices at Moorhead, Mahnomen, Bemidji, Cass Lake and Deer River.

The second company resulted from a chance visit Yager made in the Southwest, Singh said. “They (Natives in the Southwest) had the same needs she was addressing in Minnesota,” he said.

Soaring Eagles Circle of Life Home Care now has services for a variety of urban and tribal populations based out of Phoenix, Kayenta, Dilkon and San Carlos / Peridot offices in Arizona; and at Gallup, Shiprock, Albuquerque and Zuni offices in New Mexico.

Kola Circle of Life Home Care is essentially a westward expansion of the Minnesota operations. It has its North Dakota office at Fort Yates and has offices and operations based at Oglala (Pine Ridge), Mission (Rosebud) and at Eagle Butte in South Dakota. Extensions of them are local agencies established at Billings, for Montana, and Denver for Colorado.

In its May 30 announcement sent to business media, the Alpine Investors group called its acquisition a partnering for joining COLHCA with its TEAM Public Choices (TPC) units that perform similar home care services across the country.

“Circle of Life is the embodiment of what we seek to do across all 50 states, allowing individuals to be cared for in their community by people of their choosing,” the announcement said.

In that statement, Singh said Yager and he had often talked about “partnering with the right firm and people” to grow the company forward.

With TPC, he said, COLHCA will have resources and capabilities to “propel” the company for the next phase of growth. “The fact our strategy, values and culture are perfectly aligned and that we are fully committed to ‘Honoring Those We Serve’ makes it a dream team and partnership,” he said.

Alpine Investors describes itself as a “people-driven private equity” firm, primarily investing in software and services companies. Asset values of its various portfolios were not readily available in business and finance searches, but business media reported in June 2017 that Alpine had closed a sixth fund for investors at $532 million. In March this year, Alpine informed the U.S. Securities and Exchange Commission (SEC) that it was launching a seventh fund seeking to raise $750 million for investments.

San Diego-based TEAM Public Choices, meanwhile, is in many ways a larger version of COLHCA. It operates home health care services in 20 states. And it, in turn, is a unit of TEAM Services Group that provides household employment and home care services in all 50 states.