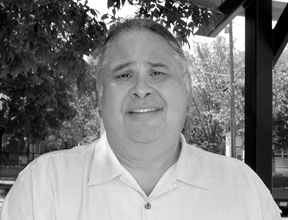 Michael Goze (Ho-Chunk) has been selected as the new President and CEO of the American Indian Community Develop-ment Corporation in Minneapolis. The appointment is part of a larger transition for the organization.

Goze has a long history of service in the Native American community and Phillips neighborhood. “My last three offices were right here on Franklin Avenue,” Goze said. “So I think we’ll have a fairly seamless transition.”

Goze has worked in real estate and in chemical health and dependency.

health counselor for Hennepin County. He was worked at the American

Indian Center, and the Lifeskills Center for Leadership. He believes

his background will serve as a solid foundation for meeting AICDC

communities. Since 1991, it has developed several housing and chemical

a way to increase stability and economic development in the Native

community,” he said. He has a particular interest in providing safe

and affordable homes to special needs Native Americans and elders.

AICDC currently earns revenue from a variety of sources. “A large part

of the income comes from contracts for services,” he said.

“Approximately 5% of the total budget comes from competitive grants.”

Goze said he hopes to add to AICDC’s economic and social platform, “I

Secretary of Indian Affairs,” Goze said. “I can bring relationships

like that to AICDC, relationships on federal and tribal levels.”

As part of the larger AICDC transition, Goze will be looking for a

Chief Operating Officer to assist in the day-to-day operations.

Gordon Thayer, the previous President and CEO, co-founded (with Robert

Albee) AICDC. In 1991, the American Indian Task Force on Housing and

Homelessness was formed from a Homeless Assistance Act initiative.

Thayer, working for the Bureau of Indian Affairs at the time, was

determined to focus on the Twin Cities. Thayer and Albee organized the

task force with Native professionals. Their initial goal was to provide

better assistance to American Indians on the streets and in shelters.

Recognizing the scope of homelessness among Native people (10% at the

dedicated to housing and supportive services, the American Indian Task

served as AICDC President and CEO until this spring.

Goze said he was not part of initiating the current AICDC transition,

which was launched by the Board of Directors. “Gordon is a friend of

mine,” Goze said. “He is pursuing his interests in treatment services

and the ministry. He’s working in the neighborhood on those issues

Chicago Avenue for Hennepin County, and has recently worked with the

Mille Lacs Ojibwe to develop the Niibiwa Sibiin housing and other