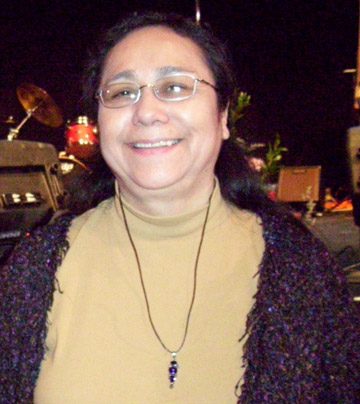 A lack of housing for Native American elders has attracted development within the Twin Cities. In particular, The American Indian Community Development Corporation (AICDC) recently began the construction of affordable apartments in southern Minneapolis.
The apartments are named "Bii Di Gain Dash Anwebi" (come in and rest); an Anishinaabe title for Native residents. Co-sponsored and managed by Common Bond Communities, the apartments will offer services like program training, wellness and prevention workshops, independent living skills, and discussion circles.
To help elders transition into the apartments, AICDC's office has begun to pre-qualify individuals. In charge of this initiative is Shirley Cain, (Red Lake Ojibwe), an attorney who has recently come to work with AICDC.
"I'm enrolled in Red Lake. My father's a Red Lake band member, and my mother is from White Earth. My job is being a Housing Specialist. I was hired to help elders into the Bii Di Gain Dash Anwebi program."
Cain works to pre-qualify individuals for housing in the apartments. Pre-qualification begins the screening and admission process. The complete operation will begin next year.
"There's a big process Common Bond uses when it screens applicants for housing. There's a background check as well as lease agreements to figure out. There are many policies residents must follow, and so what Mike Goze [Executive Officer of AICDC] has hired me to do is help people pre-qualify, so that they don't have to go through all the paperwork before they move into their new homes."
"Based on his conversations with members of the community and particularly elders, Mike has been informed of some of the housing issues [elders] may have that prevent them from qualifying for one of the new housing units," Cain said.
Criminal records or unlawful detainment actions by authorities can show up on the Background Checks of potential residents to the new housing. Credit issues can also be a concern. Cain works to help elders overcome these challenges with her legal expertise.
"Everyone has to sign a release giving me authority to review their record. In return I work with Common Bond so they can know if [elders] are pre-qualified or not."
"There are two criteria for entering the new Elder's housing unit. You have to be sixty-two years old and below the median income of $29,400. From what I understand, most management companies look for felonies when screening residents. Many times, the applicant is stopped in their tracks from applying to unit housing."
To prevent this, Cain works to expunge the records of elders with past criminal records. Expunging a record means sealing it from public record, making pre-qualification easier for potential residents of the Bii Di Gain Dash Anwebi apartments.
"There are different reasons for expunging a record. For example if you've had a dismissal come up on your record that's more likely to be cleared. If a sentence was imposed, but held off; if the conditions of the sentence were met, the record is more likely to be dismissed," said Cain.
"I'm going to do everything I can to qualify someone who wants to get in. I'm perfectly willing to go whichever route I need to go to get the job done, because elders need a place to live," Cain said.
For Cain, helping her community is a personal mission. "My father was a Public Defender for our tribe," Cain explained. "He took me to the court when I was young to show me what he did; how he negotiated, how he worked in the interests of his client."
"I later worked in helping to implement the Indian Child Welfare Act. I was an advocate in the area and was there for its implementation. I was inspired by Jay Wilkinson, a lawyer I was working for. I watched everything he did. I thought to myself; I want to be a lawyer like that, you know. Someone who really has ethics and works for the people."
Cain continues to work even at lunchtime. "What I've started doing is going to Minneapolis American Indian Center (MAIC) around noon for lunch. I go there to talk with the elders and pass out my business card," Cain said. "So far, I'm working with eleven clients to help them through pre-qualification."
A total of forty-seven one bedroom apartments will be located on the east and west sides of Bloomington Avenue when the project is completed.
"We encourage anyone who can to come in and talk to us," Cain said. "We're just off of the American Indian Center, at 1508 Franklin. Stop by!"
AICDC encourages anyone interested in Elder's housing to call 612-813-1610, or visit their website at www.aicdc-mn.org.