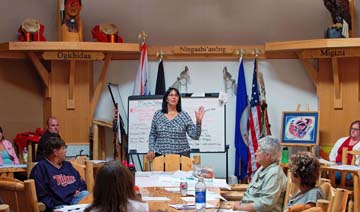 Long plagued by poor student performance and still reeling from a 2005 tragedy, the Red Lake Ojibwe Reservation School District was stung last spring when two of its schools ranked among the state’s lowest performing.
But the district is fighting to overcome that designation, armed with a turnaround plan that has teachers working with parents to create tailored learning plans for all students.
Classes don’t begin until Sept. 7, but the year is already off to a very different start as teachers are putting in three weeks of work before students arrive. They’re using some of that time to call the parents of every one of their students, and if necessary making home visits.
Patty Stomberg, a teacher at Red Lake High School, said engaging parents will increase attendance and help prevent drop-outs – two areas where Red Lake schools fall short of state requirements.
That’s important on the Red Lake Reservation, where some of Stromberg’s students will be the first in their family to graduate from high school.
“A lot of the children that are now in high school, their parents were part of that high drop out rate,” she said. “So they’re very intimidated by the high school.”
The district is making sweeping changes because the high school and an elementary school in the village of Ponemah failed to meet guidelines set by the federal No Child Left Behind Act. Their turnaround plan comes with grants of more than $2 million.
But getting that money meant some tough choices. Administrators were given a short list of reform options. They reluctantly chose a plan that forced them to fire high school principal Ev Arnold, who many describe as popular and effective. 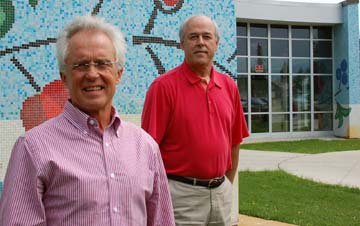 “At first I think, I can’t believe they’re going to do this,” Arnold said of his dismissal. “And over time… I had time to reflect and think about the impact. It’s hurtful, because we’ve grown in leaps and bounds, but it’s the right thing to do.”
Arnold said the other choices were worse. They included firing half the teachers, or simply shutting the schools down.
Fortunately for Arnold, the district rehired him as its turnaround officer, a new position charged with overseeing reforms.
Poverty is common among all 19 Minnesota schools receiving federal turnaround dollars. Each of the state’s three largest Indian reservations – Red Lake, White Earth and Leech Lake – have schools on the turnaround list.
The complex history in Indian communities includes generations who were forced into boarding schools. Some still look at education with suspicion.
For Red Lake schools, there’s been more recent trauma. In March 2005, a 16-year-old gunman killed nine people before killing himself. Most of the deaths happened at Red Lake High School.
Arnold said the district is still rebounding. “Because of the tragedy, there was so much anxiety,” he said. “You’re not going to thrive academically, so it was into a survival mode. And there was lots of deviant behavior.”
Suspensions and expulsions each year were as high as 550 following the shooting. Now, those numbers are down to about 150. Graduation rates back then were dismal, in the 30 percent range. Now, it’s 42 percent – far below the state average of about 79 percent, but still an improvement.
Test scores are up, too. Reading scores at Ponemah Elementary were up by 12 percent. Math scores rose 14 percent.
Red Lake’s turnaround plan adds 20 minutes to each school day, and extends the school calendar by eight days. It adds so-called summer academies, where students choose hands-on activities like camping or community service. It requires teachers to form teams that will take a comprehensive approach to helping every student succeed.
Superintendent Brent Gish said the measurements the state used to create the underperforming schools list didn’t capture the progress that’s been made. But Gish said teachers are committed to the latest turnaround effort.
“Once we got past the anger of being identified and just say, alright, anger isn’t going to solve this thing, it caused us to look in the mirror and really reflect,” he said. “Are we doing the right thing here? … We believe that many of our initiatives are right on.”
Red Lake school officials also want to resurrect a school-tribal collaboration established after the 2005 shooting. They want to work more closely with the sovereign tribal government on a range of issues, including reducing truancy.