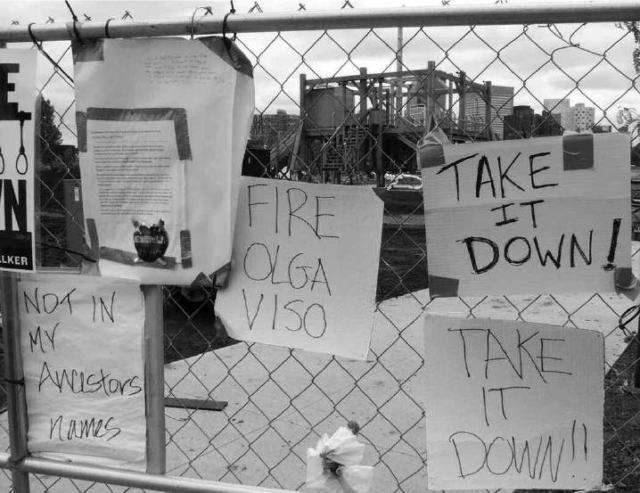 Outrage from the Native community in Minneapolis has put the Walker Art Center in the hot seat. The Center’s installation of a two-story gallows structure entitled “Scaffold”, by artist Sam Durant, includes references to the hanging of 38 Dakota men in Mankato in 1862 by the US government.

“Scaffold” is a collection of recreated gallows, from the largest U.S. mass execution – the 38 Dakota men – to the execution gallows of Saddam Hussein. Durant says it was intended to open “the difficult histories of the racial dimension of the criminal justice system in the United States, ranging from lynchings to mass incarceration to capital punishment.”

The artwork was set to open with 18 other new works in the Minneapolis Sculpture Garden on June 3. But due to massive outcry from the Native community, the opening has been delayed until June 10. The Walker has also announced that it will take down “Scaffold” and has met with the Dakota community on how best to move forward.

In a statement, Walker Art Center’s Executive Director Olga Viso wrote, “I regret the pain that this artwork has brought to the Dakota community and others. Prompted by the outpouring of community feedback, the artist Sam Durant is open to many outcomes including the removal of the sculpture. He has told me, ‘It’s just wood and metal – nothing compared to the lives and histories of the Dakota people.’”

Protests were held by the fence surrounding the sculpture garden and messages were posted on Facebook, calling for the piece to be dismantled, saying it trivialized the executions, and calling for Viso to be fired.

On May 31st, a three-hour meeting was held between Dakota elders, Viso, Minneapolis Park and Recreation Board representatives, and the artist. The meeting ended with a plan for Dakota elders to dismantle the art piece and hold a ceremonial burning of the wood.

According to the StarTribune, Viso said, “This is the first step for the Walker in a long process to rebuild trust with the Dakota and Native communities throughout Minnesota. …We’re grateful to the traditional Dakota leaders for their wisdom and patience in this process.”

A Native-owned construction company will begin taking apart “Scaffold” on June 2nd, which will be overseen by Dakota elders. The wood will be moved to a site near Fort Snelling. The agreement also includes Durant transferring intellectual property to the tribe and agreeing to never create the Dakota gallows again.

Walker officials said in a statement, “It takes at least four days to remove the wood. It will be removed by a native construction company, and the wood will be placed in a fire pile near the remaining steel under-structure with signage explaining the mutually agreed upon process until the wood is removed.

“The wood will be removed and taken to the Fort Snelling area, because of the historical significance of this site to the Dakota Oyate, where they will ceremonially burn the wood.”