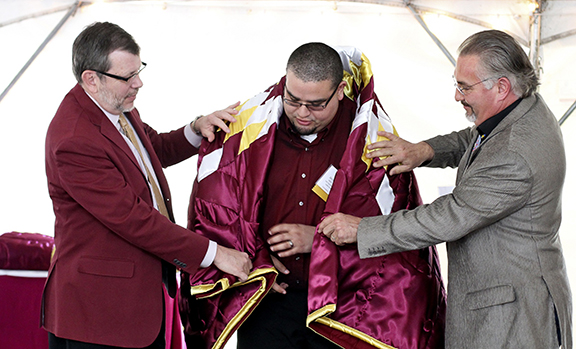 The Master of Tribal Administration and Governance (MTAG) program at UMD graduated its first cohort in 2013. Since then at least four MTAG graduates have become elected tribal officials in the Minnesota – Wisconsin region. Most recently, Jason (Jay) Schlender (MTAG ’13) and Jason Weaver (MTAG ’16) were elected to the Lac Courte Oreilles Band of Lake Superior Chippewa tribal council. Jay and Jason were sworn in July 7, 2015.

Also from the Class of 2013 was Carolyn Beaulieu, who had been a tribal administrator at the Mille Lacs Reservation and was elected Secretary-Treasurer of the Mille Lacs Band in 2014. Similarly, in 2014 Annette Johnson was elected the Treasurer of the Red Lake Band of Chippewa after graduating from MTAG in 2013. The Class of 2014 included sitting Tribal Councilman Brooks Big John who said, “…. The curriculum is relevant, the professors are knowledgeable, and the staff is professional. The diverse experience and expertise of my classmates has made learning again a pleasure not a burden or challenge.” Brooks serves on the council of the Lac du Flambeau Band of Lake Superior Chippewa Indians.

The MTAG program was developed through two years of tribal consultation from 2009-11. From the consultation, several ideas and courses rose to the top: a year-long course on tribal sovereignty in which the entire history of federal, tribal and state relations is examined; a year- long course in tribal leadership and ethics; and a series of courses in tribal management (strategic, operations, human resources and project management) all of these courses were geared for tribal governments. Johnson said, “The MTAG program was designed for tribal governments by tribal governments.”

The consultation also revealed that people wanted a better understanding of the complexities of tribal finance, accounting and budgets – and Federal Indian law –which were added. MTAG is a 2 year program that meets with 4 synchronous meetings each semester, which can be attended in person or online – the rest of the program is online. The 35 tribes of the Midwest Alliance of Sovereign Tribes (MAST) endorsed the program with a resolution, and MTAG was approved by the University of Minnesota Regents in February of 2011.

With the success of MTAG, UMD is adding a new all online Bachelor’s degree in Tribal Administration and Governance (TAG) this fall. The new TAG program is designed for persons who have an Associate of Arts degree and want a totally online program. However, the TAG program can easily accommodate students with other academic backgrounds. While consulting with Indian people and non- Indian people on and off reservations, we discovered many potential non-traditional students who had gone to Tribal Community Colleges, or gone to college for a year or two, and then settled down, had children and were looking for ways to complete their Bachelor’s degree online and work for tribal governments. MTAG Director Johnson says, “We believe the TAG program will fill this need.”