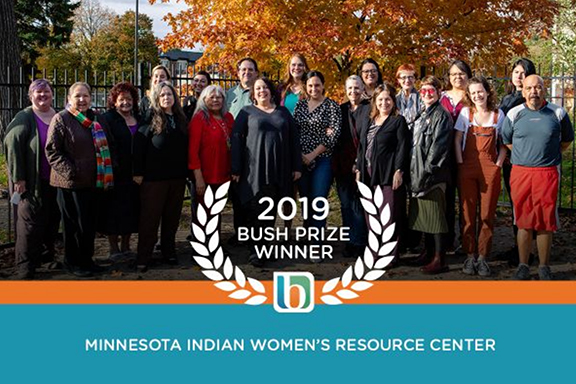 The Bush Foundation in November awarded five Bush Prize for Community Innovation prizes and grants to organizations in Minnesota and the Dakotas to further their efforts in the coming year, including three that directly or indirectly serve area Native Americans.
The prizes go to groups that have a “track record of successful problem solving for their communities,” the St. Paul-based charitable foundation said. They include the Minnesota Indian Women’s Resource Center, in Minneapolis; and the Rural Renewable Energy Alliance (RREAL), at Backus, which has partnership projects with Northern Minnesota tribal nations.

“This year’s winners demonstrate a pattern of working inclusively, in partnership with others, to make the region better for all,” the Bush announcement said.

The prize was started seven years ago by Bush to salute and support efforts in Minnesota, the two Dakotas, and the 23 tribal nations that share the region.

Other recipients this year include the Hmong American Partnership, of St. Paul ($500,000); the Wokini Initiative at South Dakota State University, Brookings ($500,000); and the Valley City-Barnes County Development Corp., in collaboration with Valley City, N.D. ($358,000).

Patina Park, president and chief executive at MIWRC, said in late November that her group is in meetings on how the Bush grant will be used in the coming year. It has social service and assistance programs spread throughout Native communities.

Bush noted MIWRC was a key player among Native organizations to “respond swiftly and effectively” to the homeless encampment in Minneapolis this past winter that resulted in multiple nonprofit and governmental agencies collaborating on temporary safe housing. “MIWRC built public understanding of the situaton and partnered with government agencies to effectively address the crisis,” the Bush statement said.

RREAL, founded in 2000, worked with the Leech Lake Nation to build a first in the nation community solar system that provides solar assistance to qualified families, lowering their energy costs, while creating solar industry jobs for tribal members.
The solar energy company is currently working with the White Earth Nation in building local solar systems in five locations.

Bush said SDSU, a part of the nation’s land grant university system, is the first university to dedicate part of its land grand funds to Native student success programs, “a decision that explicitly acknowledges that SDSU and the state have benefited from lands taken from the Lakota and Dakota people by the U.S. government.”

The Valley City-Barnes County Development Corp. prize noted that this group is successful in promoting community development through a combination of programs that include development of a skilled workforce with affordable housing and childcare.
All five prize recipients have community building programs effectively working in the Upper Midwest. The Bush Foundation was started in 1953 by 3M Company executive Archibald Bush and his wife Edyth with the goal of encouraging organizations and people “to think bigger and think differently about what is possible in their communities.”
More information can be found at www.bushfoundation.org/BushPrize.