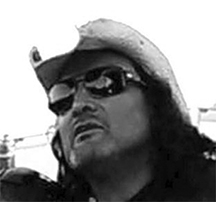 Donavan “DJ” Golubowicz, age 49, of the Lower Sioux Community entered the Spirit World on February 5, 2016 at his home. Donavan Jaye Golubowicz was born January 23, 1967 in St. Paul, Minnesota to Dennis Lothert and Lillian Columbus.  He graduated from White Bear High School, and later attended Century College for culinary arts.  DJ worked in construction and earned his boilermaker’s license. He traveled the world, and rode all over the United States on his Harley. He loved the outdoors and wildlife, taking care of dogs and training them. DJ enjoyed spending time with his family and friends and being goofy with his kids. He was a fun loving, outgoing person. DJ was an outstanding cook, loved watching movies, and enjoyed doing arts and crafts. His favorite pastime was playing guitar, singing, and dancing.