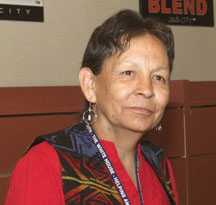 Sheila passed away peacefully at home after a long and courageous

battle against breast cancer. Sheila was the Director of the Saint Paul

than 20 years and worked for the program for 36 years. Under Sheila’s

leadership, DIW has expanded from the Emergency Services food and

clothing rooms to include parenting and youth enrichment programs and

Other career highlights include:  Began the Elders Transportation

program with the American Red Cross; Worked with the community to build

an Elders Lodge, now located in Saint Paul; For ten years, worked with

with local and global hunger; Worked with community on 13 annual

Also during her long career, in 1989, Sheila launched the American

Indian Parenting Program and in 1992, She began the American Indian

Youth Enrichment after-school and summer programs which last summer was

recognized by First Lady Laura Bush. In 1993, Sheila was recognized

with the McKnight Award and in 2001, Sheila led the Family Education

Diabetes Program, which has grown to now include education for youth

and a partnership with the University of Minnesota. Before she died,

Sheila was in the planning process of getting a non-denominational

Langevin and Andrea Kidd and many aunts, uncles, nieces, nephews,

cousins and friends. Memorial service were held on June 12  at St. John

The Evangelist Episcopal Church, in St. Paul, with interment at Fort