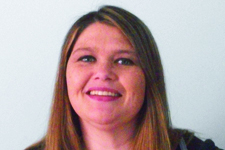 Jones will be the first female to lead the 9,000+ member Leech Lake Band. She has degrees in business administration and accounting from Bemidji State University. She also has more than twelve years experience working with tribal governments in finance-related roles.

Because there’s no automatic recount, LaRose and Whitebird both asked for recounts. But LaRose and Whitebird withdrew their contests after a pre-hearing conference and a two hour discovery process. Bruce Baird, who represented the incumbents at the hearing, informed Judge Osburn that "the burden of proof is too severe," so the incumbents were dropping their contests. Judge Osburn noted that he would issue orders reflecting the withdrawals of the contests.

"I am very happy for Leech Lake," said Chairwoman-Elect Jones. "The integrity of our election process was upheld and now there is clarity moving forward," she continued.

"It’s time for new leadership," Jones told the Pioneer. "It’s time for my generation to start taking over. I feel I have a lot to offer. I’m thankful and proud to make this mark in Leech Lake’s history."

Jones said she decided to run for chairwoman because of the state the tribe is in financially.

"I base all of my decisions on finance," Jones said earlier. "I think that’s the backbone of a great organization. I know all of the band’s financial background, so I think that’s a huge step up for me."

"The voice of the people was followed today and for that I am thankful," District III Representative-Elect Staples-Fairbanks said. "I am humbled and excited by this opportunity to continue to serve the people of Leech Lake." Staples-Fairbanks has served the Leech Lake Band as Deputy Director for more than two years and has also served in an elected capacity on the Leech Lake Housing Authority Board of Commissioners for the past four years. He has also been active in volunteering with area youth for numerous years.

The contest withdrawals pave the way for both Jones and Staples-Fairbanks to be sworn in to their new positions at the Leech Lake Tribal Council Quarterly Meeting on July 6. The meeting will likely take place at the Northern Lights Casino in Walker, Minnesota.